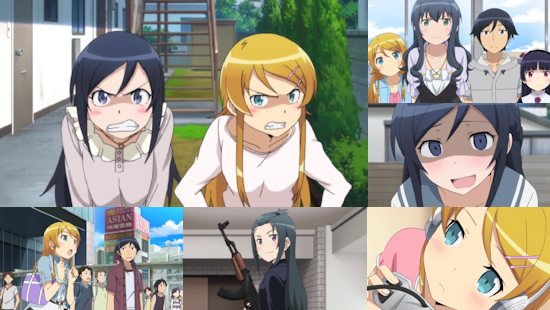 In my review of the first series of Oreimo, I summed it up as "the best otaku comedy in a generation". High praise indeed, so how can the second season of this light novel adaptation work from those heady heights? By not even trying, that's how.

If that sounds like a scathing put-down, then... well, it is actually. There's a lot wrong with Oreimo's second series. However, what I mean more charitably by that comment is that this season shifts markedly away from the otaku comedy elements which defined much of the first series, and instead sets its sights on becoming something approaching a harem comedy instead. With the boot on the other foot, the character-driven comedy drives the otaku references here, rather than vice versa in the first series.

Thus, circumstances see elder brother Kyousuke become the real focus of events, as he finds himself inadvertently spurring on the affections not just of Ruri (aka Kuroneko) to continue the development of their relationship from season one, but also childhood friend Manami, Kirino's friend Ayase and others besides. Of course, all of that is to reckon without Kirino, and it doesn't a genius to figure out what feelings hide beneath her cold exterior to her brother.

Even this in itself isn't necessarily a problem - Kyousuke's character was likeable and reliable enough in season one, so most of the female interest in him could be justified. Note the use of the word was though, because perhaps Oreimo's biggest misstep in this second season is the way that it effectively wrecks every single character. By the end of the show, almost every single character has becomes a grotesque parody of themselves - Kyuosuke has turned from a well-meaning young man into a loud-mouthed, arrogant pervert; Ayase is no longer simply a precocious girl but an unhinged maniac; even fan favourite Kuroneko turns from smart, savvy yet social awkward into a self-destructive oddball. Oddly, it's only Kirino who really survives this maelstrom of terrible writing intact, and come the end of the series she almost starts to feel like one of the more reasonable characters within this quagmire.

Much of this destruction of the cast's charm that the series suffers comes at the hand of its major story beats, which don't so much jump the shark as strap on a rocket and blast over the shark straight into orbit. Of course this series was always going to seek to bring some kind of closure to Kyousuke and Kirino's relationship, but the way that it's brought about is wall-to-wall ludicrous and barely holds together without falling apart at the seams. This isn't me sitting there pointing and laughing from some kind of moral high horse, this is me pointing and laughing at a clumsy and contrived attempt to resolve events in a way that might be regarded as satisfying but instead reside somewhere between eye-rollingly daft and inadvertently hilarious.

This isn't to say that Oreimo is bereft of good content within this second series - one character who actually doesn't get a raw deal is Saori, who instead gets a touching little episode exploring her origins as an otaku, and there are still some nice little moments that pin down elements of the fandom its cast reside in (or in some cases keep at arm's length) with an expert eye. It's ultimately this which leaves me so disappointed in Oreimo Series 2 - I wanted more of the same comedy I'd enjoyed so much the first time around, but instead I'm treated to an entirely different effort with characters that feel entirely different to those I'd previously warmed too. I except that some of that feeling of disappointment has to be reflected upon me for my misguided expectations, but that still doesn't give the atrocious writing and characterisation which undermines the series a free pass.

One area where Oreimo continues as before however is with regards to its animation quality - in spite of the collapse of previous studio AIC requiring a move over to A-1 Pictures for this second season, everything is as you'd expect - easily recognisable character designs and a level of detail that really adds to the viewing experience in places, especially when it comes to shops or rooms filled with figures, manga and visual novels. This is further helped by MVM Entertainment's DVD release sporting a far, far better video transfer than series one, looking crisp and clear compared to the indistinct look of its predecessor. This is largely down to the use of a different NTSC to PAL conversion process, and unfortunately this instead has another side-effect - a "warbling" tinge to the audio track which is occasionally irritating but mostly hard to pick out. Overall, although we'd prefer native NTSC discs at this point we'd take the minor audio annoyances as the lesser of two evils in favour of a much better video encode. This release also feels much better than series one in terms of subtitle quality, with far fewer errors and a high level of quality overall - add in a strong selection of bonus materials across these three discs, and this is a pleasingly comprehensive edition for anyone who wants to pick up a copy.

Having fallen in love with Oreimo's first season again thanks to its UK DVD release, so this second series arriving on DVD reminded me of exactly why I railed against it so hard when it aired. In microcosm, almost every one of its episodes has some major narrative issues, and looking at the big picture of the show you're left with a series that feels like a clumsy fan fiction attempt that somehow accidentally got an anime adaptation. With its characters reduced to mere parodies of themselves and its story shifting focus wildly (and arguably in the wrong directions), this is as disappointing as sequels get.

4
Oreimo's second series takes everything that made the show popular, throws it all in a trash can, bludgeons its cast into ill-fitting roles and tosses them into the midst of a narrative car crash. This isn't the sequel that its predecessor deserved.
COMMENT AND DISCUSS
blog comments powered by Disqus