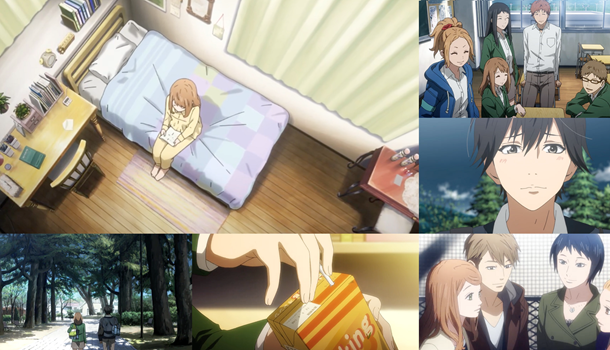 Orange opens with 26-year-old Naho Takamiya narrating how many regrets she has from decisions she made ten years ago. As if she were talking to her younger self, she warns young Naho to not make the same mistakes.

Orange then flashes back to 16-year-old Naho Takamiya, who overslept and is late for school for the first time in her life. Naho finds a letter in her schoolbag, signed by her future self. She brushes it off at first, but after the letter describes her entire day accurately – from being late for school to a new transfer student being introduced in the class - Naho can’t help but believe the letter.

At school, Naho is part of a close-knit group: Azusa Marusaka is an outgoing, energetic girl, whereas Takako Chino is her opposite as calm and reserved (just don't get her angry). Hiroto Suwa is an avid football player who gets teased for eating a lot, and Saku Higata is his opposite as a quite stoic, non-athletic character. When new transfer student Kakeru Naruse is introduced to the class, Hiroto immediately invites him to hang out after school. The somewhat quiet Kakeru seems to enjoy spending time with his newfound friends, slowly opening up. With the mysterious letter in mind, Naho keeps to the background – the letter warned her not to invite Kakeru after school, and Naho is worried whether or not she should have listened to her supposed future self.
The next day, Kakeru is absent from school, and doesn't return for two weeks.

Now truly convinced the letter is real, Naho follows the advice from her future self, trying to avoid the mistakes and regrets her future self described. These seemingly small things, such as preparing lunch for Kakeru or participating in a softball match, positively influence the life of both Naho and Kakeru. But then 16-year-old Naho makes a shocking discovery: future Naho reveals Kakeru will soon die.

With the major plot twist revealed early on, the story is clear and straightforward, yet enough mystery remains to keep viewers captivated. As Orange is directed by Hiroshi Hamasaki, who also directed the wildly popular sci-fi anime Steins;Gate, nothing less is to be expected - it will come as no surprise that the sci-fi aspects seamlessly flow and blend in with the general slice-of-life feel of the series.

Occasionally, the series shifts to the group of friends in their mid-twenties, who after unearthing a time capsule they made as teens reminiscence over days of the past and their lost friend. Orange is a beautiful homage to youth and highschool life, even to a point where the underlying sci-fi theme could easily be forgotten. Therefore, it almost feels like a rude awakening when viewers are reminded of Kakeru’s impending doom. This excellent blend of elements captivates and engages viewers – will teenage Naho be able to change fate, and if so, how will this impact the future?

The title 'Orange' is likely chosen because Naho receives an orange juice from Kakeru. Receiving orange juice is one of the many seemingly unimportant, small details 26-year-old Naho writes to her younger self. This is exactly what gives the serie its charm – instead of huge life-changing events, viewers are reminded it's the small things that matter most, such as spending time with friends during careless summer days.

Befitting the serious undertone of the series, the art style is realistic. Orange treats its viewers to lively, beautiful backgrounds and a vibrant cast, whose voice actors further bring the characters to life. The banter amongst the group of friends feels natural and the way their lives are depicted realistically. Added with the good use of background music throughout the series, Orange is both visually and audibly a delight to watch.

Despite only three episodes aired at the time of writing, expectations are set high. Perhaps Orange will be another masterpiece about time travelling on par with Steins;Gate. Time will tell.

You can currently watch Orange in streaming form on Crunchyroll.