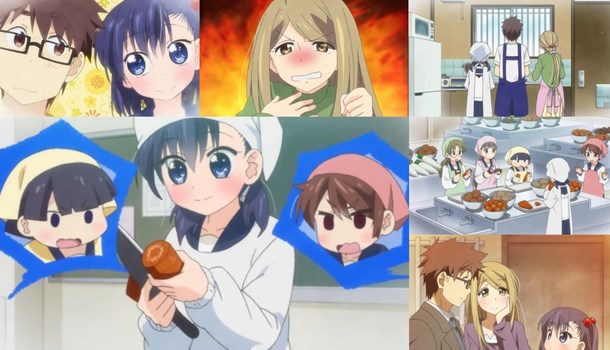 A young man named Maeda moves in to a small apartment complex, only to find out that Chie, the landlady, is a middle schooler. The title literally translates to 'Landlord is in Puberty!', and a series about a very young landlord sounds like a good base for comic relief. However, despite the title suggesting the series revolves around landlordship, the real theme in Ooyasan wa Shishunki! seems to be cooking.

The series is based on a short four-panel manga, and as such each episode is only two minutes long. This leaves room for very little storyline – for one, we don’t learn why Chie is living all alone or even left in charge as a landlady. This is not necessarily a problem as the series main focus is to provide light-hearted, comedic entertainment. However, the main comedy relief in the beginning of the series is Maeda having indecent thoughts about Chie. As she is young and naive, Chie is seemingly unaware of her own inappropriate behavior that trigger Maeda’s immoral thoughts - for example, Chie is seen cooking and having dinner with Maeda every night, as well as sleeping over in his apartment when she is scared of being alone. Reiko does seem aware of Maeda’s indecent thoughts, and calls him out as a pervert in order to protect Chie. It’s also suggested Reiko watches over Chie in general, as Chie asks her in the first episode how she is doing as a landlady.

Luckily, after a few episodes there isn’t so much emphasis on Maeda’s inappropriate behavior and the series focuses more on Chie’s school life. Chie loves to cook, and when the series shifts to Chie’s school life we see her making friends through her bento, eventually even founding a cooking club. With the introduction of Chie’s new friends in the series and focusing more on school, Maeda and Reiko are depicted as somewhat parental figures. The trio has dinner together every night, and Maeda and Reiko encourage and help Chie wherever they can. In one episode, Chie even refers to Maeda as a father figure. As of yet it’s still unclear whom or where Chie’s real parents are, but with the very lighthearted theme of the show this may not get addressed at all.

Even though the episodes are only two minutes long each, the animation is of good quality and fits the series well. The series is of course fast-paced, with jokes quickly following each other. Even the characters talk rather quick; most likely to cram as much dialogue in one episode as possible. Despite this, the voice acting doesn’t get annoying.

Apart from not exactly living up to its title, the series manages to be entertaining enough to watch a few episodes of. Whilst you won’t miss out on a great deal by skipping this one, it’s still fun to watch if you have a few minutes to spare.

You can currently watch Ooya-san wa Shishunki in streaming form on Crunchyroll.

6
A comedy about an underage landlord is not necessarily a recipe for success.
LATEST REVIEWS