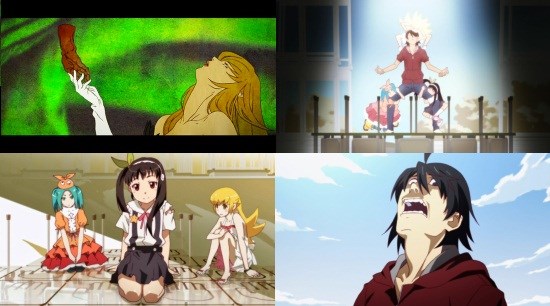 What’s that? You were expecting a continuation of Nadeko’s arc from Otorimonogatari in this latest Monogatari Secnod Season instalment? Well, keep holding onto that thought because you won’t be getting that here. In the now increasingly confusing timeline of the series, Onimonogatari sends us back to the end of Kabukimonogatari and runs pretty much as a direct continuation (I'm starting to suspect that this is being done deliberately by SHAFT just to see how much they can confuse people). So strap yourselves in as we go back to find out what happens next, but before the bit that happens next that we saw last time, and... erm...

So, when last we left our heroes (well not the last time but... look, let’s just all agree to not go down that rabbit hole shall we?) Araragi was heading home with Hachikuji so that she could retrieve a backpack left at his house. Unusually for the franchise, the two find themselves in a whole heap of trouble pretty much right off the bat as they come under attack from a large apparition that they can sense but are never quite fully able to see (though what we’re shown as an audience suggests that someone’s been watching The Prisoner). After an action-packed getaway, the two must team up with Shinobu and Yotsugi to figure out what’s attacking them, how to deal with it and how it fits in with the murky past of Kiss-shot Acerola-orion Heart-under-blade, aka Shinobu in her ultimate original incarnation.

Onimonogatari, it happily turns out, is one of the franchises better arcs. The narrative is brilliantly worked throughout the four episodes with some great twists and turns and a couple of moments that really pull the rug out from under your feet. The action in the first episode is fantastically choreographed and there’s an emotional punch towards the end that’ll bring you to tears. The comedic aspects of the series are also back on form - Araragi and Hachikuji have always been the best double-act the series has produced and they shine together here, especially with Yotsugi thrown in to essentially play the straight man (well, straight something anyway), although Araragi’s perversions do hit a little too close to the mark once or twice. The plot also does a fair bit of work in setting up at least one other arc with what appears to be an plot arc spanning the franchise as a whole as the mysterious Ougi Oshino returns along with a variety of hints as to who she might actually be and what’s she’s been up to. The franchise as a whole has rarely done much in the way of linking its stories together bar the characters themselves, so it’ll be interesting to see if this is going to be paid off in the next release (the final entry of Monogatari Second Season), or if this is being done to lay the groundwork for the subsequent OVAs.

Visually this is, for the most part, one of the best looking entries in the franchise thus far. Everything just pops on the screen, with brilliantly fluid animation throughout combined with some great backgrounds and a phenomenally well chosen colour palette. In a series which receives a huge amount of praise for its visuals, Onimonogatari really stands out. You also have to give huge props to the opening credits which do something totally different from the wonderful array of songs we’re normally presented with – here we’re introduced to the arc by a dark, melodic orchestral piece accompanied by a brilliantly animated sequence of someone moving along a road.

You may have noticed four words in the above paragraph that stand-out a bit from the rest: "For the most part". So, let’s talk about episode two. When this episode started with some wonderfully drawn, partially-animated visuals that resembled an animation of a woodblock print, it looks fantastically original and immediately caught my attention. Twenty minutes later, after essentially the entire episode had been done in this fashion, I was much less enamoured. This should have been the big stand-out episode with its focus on Shinobu’s thus-far mysterious past but it’s presented like a picture-book and, although knowing SHAFT it’s almost certainly intended to be artsy, it comes off reeking of laziness and scheduling problems. The whole thing really comes close to scuppering the arc as you spend the rest of it in fear that they’re going to start just narrating over stills again. In a way I can see what they were going for but it frankly just doesn’t work, which is a big shame given that the arc's being heavily sold on the events of this episode.

Honestly, the second episode really does damage the arc in a pretty bad way - had it been animated in line with the top-notch visuals of the other three episodes I’d happily be awarding perfect marks to Onimonogatari.  As it is it's still good, but will leave you thinking about what might have been, although given the events that occur within it Onimonogatari is essential viewing for anyone invested in the franchise.

8
A great new entry in the series that falls over, but manages to pick itself back up again.