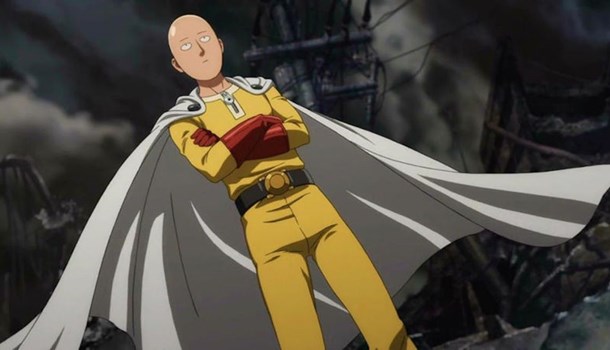 One Punch Man Collection One

One Punch Man is a frankly bonkers yet brilliant example of taking a title that sums up a show's entire premise, and running with it in such a way that the joke gets trampled so far into the ground it pops out the other side fresh as a daisy. Logically, this just shouldn't work.

Starting life as a webcomic in 2009 created by One, One-Punch Man proved a hit and was subsequently reworked into an ongoing manga illustrated by Yusuke Murata. Madhouse in turn applied their talents for blockbuster small-screen animation in adapting the series for television in two seasons, the first of which we are looking at here.

The plot is a riff on western superheroics, with the titular One-Punch Man, Saitama, being a fairly average chap who just happens to have trained his body to its peak and has since become nigh-invincible, able to defeat opponents with a single punch. This has led to two side effects – first the district of his home town (City-Z) he lives in has become deserted as folks believe a monster lives there, and second he has become completely and utterly bored as no opponent presents him any challenge, making his “hobby” of being a hero one that he finds unfulfilling. Eventually Saitama finds himself the reluctant mentor to the cyborg Genos, himself an aspiring hero who wants to learn the secret behind Saitama’s strength (his disbelief of Saitama's insane exercise Saitama is sublime). Together the pair embark on a journey to become officially recognised & ranked as heroes.

From the off, One Punch Man is a real blast of a show, a loving send up & tribute to the myriad worlds of superheroes and to the Shonen genre, with the pairing of the eternally bored Saitama with the overly earnest Genos being the show’s heart. Saitama is a goof whose ennui has resulted in his only really getting excited about the sales on his favourite foods at his local convenience store. Meanwhile he tries to avoid getting overly excited for fights, as no matter how imposing the opponent, they always go down in one solitary punch. By contrast Genos is completely earnest in his desire to be Saitama’s disciple and to learn from him. He wishes to prevent innocents from suffering the same tragedy that befell his home village and led to his becoming a cyborg.

Given their contrasting appearances – Saitama slightly dorky in his yellow & red suit with his hairless pate, Genos kinda badass with his obvious cybernetics & weird eyes – this generally devolves into situations where folks dismiss Saitama and look to Genos as the powerhouse of the duo, which tends to lead to either comedy or an almighty ass-kicking for Genos.

Impressively this formula never gets old.

Fights and characters are uniformly fresh and interesting, while the animation alternates between chunky Fist of the North Star/JoJo’s-inspired overblown antics, to intentionally basic (i.e. most of the times Saitama shows his lack of interest). Each throwdown is easy to follow and full of pleasingly crunchy punches, kicks and explosions. It’s to One Punch Man’s credit that the events leading up to each fight are themselves entertaingly engaging across the show's 12 episodes, something not all anime in this genre can boast about.

There is a caveat to this however; if you are not someone who engages with the material One Punch Man is both a representative of and is in turn lampooning, then there is a good chance it will leave you somewhat cold. But if you are a fan of superheroes and/or Shonen hi-jinks then OPM is a show I would highly recommend adding to your collection.

8
An action-packed romp that clearly loves the genres it pokes fun at.