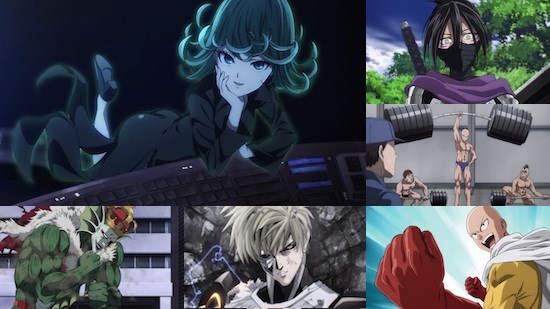 While considering what to write about the closing episodes of One Punch Man I went back to read through our original review of the series’ opening four episodes, after which I found myself extremely tempted to make this review one line long, consisting solely of a link to our previous review. You see, everything I said in that piece applies just as well to the rest of the series. The progression of the series is more or less a refinement and scaling up of all the things that made the opening episodes so entertaining. To put it another way, turn everything I mention in that review up to 11 and you’ll find the perfect description of the rest of the series.

That One Punch Man simply scales up the same formula, gags, and action time after time is something of a double-edged sword. It is both the series greatest strength and it’s biggest weakness. If you enjoyed the humour and action of the early episodes you will love the rest of the series even more, especially from around the mid-point when the Sea King surfaces. However, if you had any reservations or doubts about the series then they too will be amplified as the series heads towards it’s finale, and what a finale it is: packed full of the kind of detailed yet dynamic action sequences which have become a staple of this series. One Punch Man’s animation continues to be a wonderful mix of simplicity and fine detail; it is extremely detailed when it needs to be, especially during the action scenes. This is contrasted by very simplistic animation at times, mainly utilised to emphasise Saitama’s mood.

Before we hit the heights of that finale however we have to go through the One Punch Man motions a few times, each iteration seeing bigger, badder, sometimes quirkier, villains. Clear influences from all the classic shounen franchises, like Dragon Ball Z, ooze from every battle. Saitama continues to be frustrated by the lack of worthy opponents and joins the Heroes Association in the search of more, and at the request of his apprentice Genos. Despite landing record scores on all the physical exams Saitama finds himself ranked as a lowly Class C due to his deficiencies elsewhere. While Genos finds himself way up in Class A, second only to Class S in the rankings, and progresses quickly. However, all is not quite as is seems in the heroes association and some of the “heroes” aren’t quite as heroic as they first appear. Add this to Saitama’s quirky personality and god-like power and you have a recipe for some occasional yet interesting developments away from the usual Saitama versus monster of the week formula.

That said I can still sum up One Punch Man in much the same way as I did the opening episodes: One Punch Man is a very entertaining series that doesn’t take itself too seriously except where it really matters - in it's execution. In short the series continues to provide everything you could hope for from a parody of the archetypal overpowered shonen protagonist.

8
An entertaining and action-packed series that keeps its tongue firmly wedged in its cheek.
LATEST REVIEWS