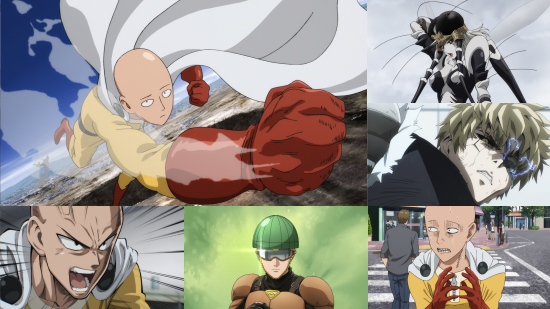 There has been a debate raging in our society since time immemorial. To become good at something - and I mean really good; an expert - does practice make perfect abd is training all one needs to become amazing at something, or is raw natural talent a factor? The reason why this debate is still raging is because it has no answer. The answer is both. Studies show that, in some fields, it really does boil down to natural talent to become truly amazing at something.

Being a hero, I would argue, also has an interesting balance of training verses talent. You have two kinds of hero. There are those who have been born with, or acquired, some kind of supernatural ability to enable them to protect others. There are those who have undergone physical and mental training to allow them to fight evil with brute strength and cunning. Then there are those like Mumen Rider, who lack both talent and training, but still it doesn’t stop them being the “wheels of justice”.

Once in a while, you get exceptions. Saitama is what I would call an exception. Saitama has what one would call a “unique” form of training. After coming across a monster one day and saving some kids from its claws, he fancied himself a hero. Why the hell not? To become a hero, Saitama put himself through a gruelling exercise regime. 100 situps. 100 pushups. 100 squats and, to top it off, a 10km run. All this, daily. Three years, and some significant hair loss later, Saitama had transformed himself into the ultimate deadpan hero and, although he can’t fly he instead has super strength and stamina. Oh, and he no longer has to bother combing his hair.

Saitama may put the super into superhero, but he is far from being the only hero. He is in fact a low ranked member, due to his "unique qualities" during exams, of the Hero Association, an organisation which is tasked with maintaining public safety. Heroes, such as PuriPuri Prisoner, Metal Bat, Bang and Tanktop Tiger need to keep the public safe from nefarious villains, monsters, creatures from the deep blue sea and even space aliens, with varying degrees of success. If you are to be recognised as a hero, you need to be a member of this association - it takes quite a bit of time for Saitama to realise this part and only after he discovers the super-cyborg Genos, and promptly thrashes him, does Saitama join the organisation.

However, Saitama’s motivation isn’t all good. After focusing on building his impossible strength, Saitama has become almost invulnerable and unbeatable. His attacks are so completely over the top and efficient that all it takes to defeat most enemies is a single punch. Like those who have extreme abilities at games will know, always winning and living life permanently on easy mode stops being fun and, because of his ludicrous strength, Saitama is bored. He longs for finding someone to actually match him in a fight, rather than just blabber on at him for hours on their origin story (20 words or less please!) So, now Saitama is a member of the Hero Association, he joins his heroic friends fighting crime, saving lives and punching things, very hard.

One Punch Man isn’t a serious anime. It pokes fun at superhero and shonen tropes, creating both villains and heroes of such ludicrous abilities and powers that their very viability is questionable. My favourite villain is the Mosquito Girl. She is not only cute, but uses an air force consisting of trillions of mosquitoes and absorbs the blood of animals and people to boost her own power. She is also sassy. I think that she deserves her own spin-off series. Just saying.

I digress. There is a lot to say about One Punch Man, but most of this has been said before. Having been voted one of UK Anime’s favourite series of 2016 (unfortunately not winning anything, no matter how hard some of us tried), its supreme comic moments and deadpan humour or dry wit which would put a British person to shame, combined with the sheer insanity of some of its moments and over-the-top fights, makes this one of the best hero-based anime series to date, and I don’t say that lightly! Having enjoyed the manga on which the anime is quite faithful to, it has been a pleasure to have been able to dive into the series, this time complete with a full English dub.

My rules regarding English dubs are simple. If possible, it must be as good as or better than the original for it to be properly enjoyable. One Punch Man did not disappoint in this regard. The actor for Saitama is excellent, mastering the variability of the character from an emotionless deadpan to an excitable roar in the heat of a battle. Similarly with the other actors, such as Tornado Tatasumaki, whose voice grates but does so on purpose as she is just a horrific person, the voice casting is bang on and is now one of those series (other than Cat Planet Cuties) who will keep on my regular rotation for something to have on in the background, while working.

The art direction for the series is unique. The series is both highly detailed in its character design and animation, while simultaneously being very simple. This is a replication of the art style from the manga and is true to form, ensuring that the anime does not significantly deviate from its source material. It can be a bit difficult to get along with at first if you are not familiar with the manga, but stick with it as the simple design for Saitama works perfectly for his character.

I am a bit of a fan of One Punch Man and it has been a dream to see it again. Now, the series now comes with the six additional OVA episodes, which are fully voiced episodes in their own right as a part of the Collector’s edition on the Blu-ray discs. These episodes take place within the main series, and cover events in the manga such as “What happens when Saitama and Genos visit Bang’s dojo?” They are well worth a watch as they are as, if not more funny than the main series. The Collector's Edition also comes with a large booklet on the series, a nice rigid box and interviews with the cast, director and musical talent JAM Project.

Given the popularity of the manga and series, One Punch Man looks to be one of the hottest releases of the year. I wouldn’t miss it for the world, and I hope you don’t either.

English and Japanese stereo audio with English subtitles. This Collector's Edition consists of a rigid box containing 84-page booklet. On-disc extras are made up of: 6 Uncut OVA Episodes; Interviews with the Director, Character Designer and US and Japanese Voice Cast; Interview with JAM Project - The band responsible for the Opening Theme Song, The Hero.

9
One Punch is all this series needs to win you over.
COMMENT AND DISCUSS
blog comments powered by Disqus