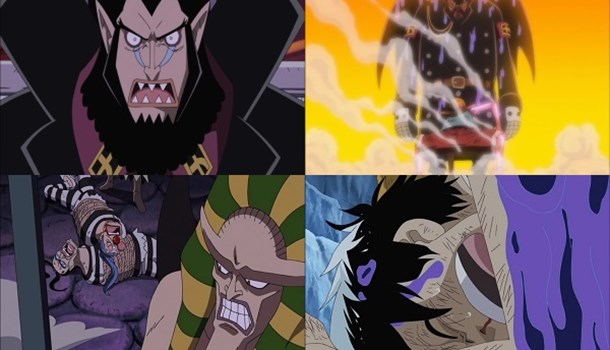 After being split from his Pirate Crew, Luffy takes a small detour from trying to reunite with his friends in order to free his brother from the world's most dangerous Prison - “Impel Down.” With the aid of Boa Hancock, Luffy sneaks his way into the prison in order to try and free Ace before he is taken away to be executed. It's a race against time for Luffy as he descends further into the hellish jail with various torturous obstacles in the way and a few familiar faces to guide him.

One Piece Collection 18 begins a very strong arc that highlights some of the best aspects of One Piece - the seamless switch in tone between serious drama and light hearted comedy. Along with this we also see another strength of One Piece. Continuity. In this arc Luffy is reunited not with his friends but various adversaries from earlier in the series. We are reintroduced to various characters and reminded of their past misdeeds along with a quick recap of any powers they have. From this we also see various reactions from Luffy varying from obliviousness to them as he didn't directly interact with them to joy at seeing them still alive and even hatred towards certain individuals as he hasn't forgiven them for their actions yet. This in turn leads to some rather fun exchanges with Luffy arguing with certain prisoners about wanting to descend deeper into the depths of Impel Down whilst others want to ascend and make their escape.

The way Impel Down is portrayed is very much inspired by Dante's Inferno with each level of the prison corresponding to a certain torture method increasing in severity the lower the floor is. With the first floor being the highest floor and the sixth being the lowest. As well as this each floor is home to more nefarious criminals whose crimes are worse the deeper undersea they are. Along with this aspect Impel Down is guarded by a Warden and Jailers who have rather demonic appearances. Here we are shown this arc's main antagonist Magellan who is a very large demon who has the power to turn his entire body into poison, making him the worst type of opponent Luffy can face since his attacks rely on physical contact with the enemy. With this villain we also get a rather intimidating enemy due to his strength and power but also comedy since his power has the adverse affect of causing stomach issues which results in constant bouts of diarrhoea. This type of humour is a running gag throughout this arc as most characters will make fun of the warden for his disposition. Which in turn leads to a lot of toilet humour and fart gags. Some of which get really tiresome as the arc progresses but are there to alleviate the more serious aspects of this arc.

Speaking of which the main arc is fuelled by Luffy's determination in order to save someone he cares about. This aspect is treated which the utmost importance and seriousness, in turn leading to some rather tense moments and dramatic events, all of which have an effect on Luffy and the overall plot of One Piece at large. We do get some slapstick humour from Luffy thanks in turn to his powers work and his general attitude of brushing things off that others would collapse from but overall things take a more serious approach here. This leads to this being one of One Piece's more interesting arcs. While the villain may be comical there are a lot of nightmarish things that are rather disturbing even by One Piece standards. The cruel and unusual punishments that the prisoners of Impel Down receive really highlight the consequences of failing at being a pirate and further highlight the dangerous aspect of the World Government and Navy as enemies of Luffy and the pirates.

The only misstep during this arc and set of episodes is when there is a sudden halt in the episodes midway through to switch to a four episode arc that is used to promote the movie Strong World (to be.fair this season did air when the film was on theatrical release in Japan -Ed) A film that is nine years old and also screened at the first ever Scotland Loves Anime. The arc itself is meant to act as the set-up to the movie by introducing the villain, main plot and motivation behind the Straw Hat crew wanting to defeat him. All of this is really unnecessary as the movie does a rather decent job itself of doing that. The arc is mainly used to remind the viewers that Luffy and the rest of the crew that hail from the East Blue get homesick from time to time and still love their home towns along with the people that live there. The arc totally breaks the flow of the episodes and really is a detractor that should be skipped on a rewatch of the arc. Speaking of which the DVD set comes with a feature to help rewatches called Marathon play that skips the Opening and next episode preview. Yet the previous on recap segment is left in tact. Other than that the feature is useful for saving some time and is a rather useful feature to have on long running shows.

One Piece Collection Eighteen is a hellishly good set of episodes only hindered by a slight breather to set up a film you've seen already.