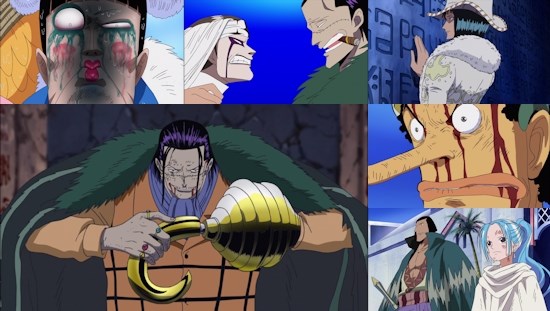 One Piece - The Movie: Episode of Alabasta

Having done an impressive job of releasing no fewer than ten One Piece movies over the course of 2014, the New Year begins for Manga Entertainment with a return to one of the most notable of those films to give it a standalone DVD and Blu-ray treatment for UK fans. Having marked it as the obvious stand-out film of the final three-movie triple pack released by the distributor, this eighth One Piece theatrical outing - Episode Of Alabasta - seems worthy of such a treatment, but what does it have to offer both the casual and long-serving fan of the franchise?

As someone who hasn't been following the TV series the opening gambit of Episode of Alabasta is a little confusing, relating as it does to Vivi Nefertari, a character who it seems I should be somewhat familiar with but have little clue about. Still, her place in proceedings soon becomes clear enough as the Straw Hat Pirates encounter a cross-dressing individual known as Bon Clay, who has been imbued by the Devil Fruits with the ability to take on the appearance of anybody who he's ever touched.

When this strange person takes on the visage of Vivi's father, it becomes clear that this individual has played a significant role in the nefarious plans of the villainous Crocodile to drag her nation of Alabasta into a ruinous civil war that has rent her homeland asunder. Of course, this isn't something that Luffy and company are willing to stand for, and in spite of Vivi's insistence that it's nothing to do with them, the group sets themselves up to take on Crocodile and his henchmen and put a stop to his plans.

With a relatively simple but effective story born out of events in the TV series and manga, Episode of Alabasta really benefits as a result by feeling like it actually matters - the typical Shounen Jump movie formula tends to ensure that such films are inconsequential and have a requirement to hit the reset button at the end of whatever transpires, but this film has the scope to aim a little higher and create something with more impact. This is actually something that Episode of Alabasta carries out with aplomb, travelling to some dark and desperate places during its second act in particular and carrying a genuine sense of threat to Luffy and company that manages to surpass the viewer's knowledge that the Straw Hat Pirates will win out and cast doubt upon that notion. The way in which everything is framed might make the movie less accessible to outsiders to the One Piece universe, but if you're willing to go along with the ride and not worry too much about the wider ramifications of the story, Episode of Alabasta still serves as a decent standalone film.

Visually, this film is a bit of a mixed bag - it sports some fantastically well-realised action scenes, and it certainly captures the unique look of One Piece as a whole, but the attention lavished upon those more intense moments does leave the rest of the film residing somewhere between looking a little bland and downright poorly animated at times. Episode of Alabasta's Blu-ray transfer certainly looks better than its DVD equivalent in all the ways you'd expect - it's cleaner, crisper and better handles fast movement - but this isn't perhaps the most vital of High Definition purchases if you already own the film in that aforementioned movie triple pack containing films seven through to nine.

One area where this Blu-ray release really disappoints however is with regard to its audio quality - compared to the US release, which correctly sports 5.1 surround tracks for both its Japanese and English language tracks, this UK edition features only stereo tracks. Not only that, but this stereo audio mix is bad - dialogue levels are inconsistent, sometimes drowned out by the soundtrack or ambient sound, sometimes overbearing against those other elements, and the entire presentation sounds flat and decidedly variable in quality. It's yet another black mark against Manga Entertainment's in-house production team, and another question mark against their competence when it comes to authoring their own discs.

That aside, both the video transfer and subtitle quality are good here (save for one or two typos which we can forgive), so the average viewer won't find cause for complaint with the presentation of this UK release unless you have a surround sound audio setup, in which case you're well within your rights to feel short-changed.

While a number of the One Piece films we saw released on our shores last year could be considered forgettable, comprising either frivolous adventures or recaps of full-blown stories from the TV show, Episode of Alabasta stands out as a good story well-told that manages to sidestep most of the issues inherent to films of this ilk. Sure, it might not be quite on the level of Mamoru Hosoda's effort (which remains the go-to example of how to make a fantastic Shounen Jump film), but it's still an excellent effort in its own right that is a must-see for fans of One Piece in particular, and also a decent effort for those not heavily involved in its universe if you can overcome any initial confusion.

7
One of the better One Piece films and a must-see for fans of the franchise, marred only by a sub-par audio mix for this UK release.
LATEST REVIEWS