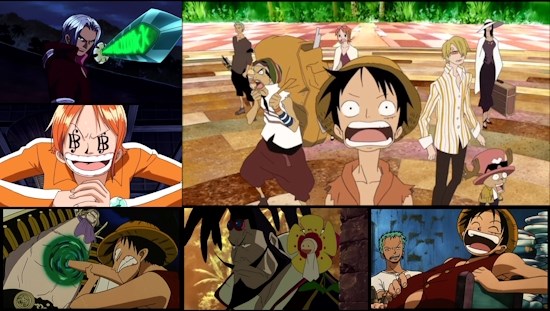 Having given us an excuse to boast of a UK-exclusive release back in July with its first movie collection, September sees the next trio of One Piece movies come to the UK in another DVD set boasting its fourth, fifth and sixth films, the latter of which is directed by a certain Mamoru Hosoda. If that little fact in and of itself isn't enough to pique your interest, then read on to find out a little more about the offerings within this collection.

Things kick off (as you might expect) with the fourth movie, The Adventure of Dead End, which sees us join the Straw Hat Pirates as they seek to escape from the marines in the midst of a terrific storm. Rewinding a little, we learn how they came to be there, having invited themselves to take part in the so-called "Dead End" race in the hope of winning its prize of 300 million Berries.

Running the contest is the widely feared General Gusparday, a former marine turned pirate, and given that a pirate hunter named Shryer Bascudo is also involved there's little need to extrapolate on the dangers that Luffy and his crew are putting themselves into the midst of. As it turns out, the name of the Dead End race is a decidedly apt one for the pirates who have entered, and it's no great surprise that things ultimately come to a head between Luffy and Gusparday as the true extent of his villainy is revealed.

Although its setup and execution are both decidedly run-of-the-mill in the way that they follow the Shonen Jump movie formula, there's certainly something to be said about the ambitious nature of The Adventure of Dead End's presentation. Although some of its CG looks a little dated now, its long first-person shots and occasional use of first-person perspective during action scenes really mark the film out and work in its favour when coupled with the dark, brooding palette of much of the film which matches its stormy setting and narrative. The film's story might not grab you but its aesthetic almost certainly will, which makes the muddy transfer used in this DVD release more than a little frustrating, especially when both subsequent films enjoy a clean and crisp transfer in comparison.

In comparison the fifth One Piece film, The Cursed Holy Sword, is easily the most forgettable of the trio contained within this collection. The film sees Zoro lured away from his guard post to meet an old friend named Saga just as his crewmates discuss the possibility of searching for the mythical Seven Star Sword which seems to promise untold wealth to whoever happens upon it. While this search seems likely to be cut short out of concern for the missing Zoro, as it turns out the crew's hunt for their comrade will actually bring them into contact with the sword, and also reveal to them the horrifying legacy that wielding it subjects its owner to.

There really isn't a whole lot to say about The Cursed Holy Sword - it's a competent shonen action movie, but also a predictable one that doesn't really have any panache or invention to allow it to stamp its own authority onto the One Piece franchise. Long-running fans of the series will probably enjoy seeing Zoro's character given more attention, but even he's ultimately shunted aside to ensure that Luffy takes centre stage. With a far better transfer than the other UK releases of these earlier One Piece movies so far there are some good-looking moments and scenes spread throughout the film, but as a standalone outfit it doesn't prove to be at all memorable, and even the inclusion of a baseball-themed short as an extra succeeds in adding little more than a few smiles.

Thankfully, the same can't be said of Baron Omatsuri and the Secret Island, the aforementioned effort directed by Mamoru Hosoda. The good news for fans of Hosoda's other works is that - even for those unfamiliar with One Piece - this film holds all of the director's trademarks in spades. It's a well-paced film with a great sense of comedy timing, which leads into a surprisingly dark final act that turns downright nightmarishly sinister before its resolution which makes wonderful use of the film's cast of original characters.

Before we get too far ahead of ourselves, the film sees the Straw Hat Pirates learning of the existence of a place known as Omatsuri Island - a dream resort that will cater to your every whim and need, from food to women and beyond. Needless to say, this is far too tempting for the crew, and even when the group are faced with Baron Omatsuri's so-called "Trials of Hell" they're happy to play along, although the goal they're fighting for ultimately seems to fade in deference to the group fighting one another. Indeed, this breaking of the bonds between friends is a major part of the dark secret of the island, but can Luffy's own bonds with his comrades prevail in the face of seemingly insurmountable odds?

Perhaps the most miraculous thing that this sixth One Piece film does is to take that typical Shonen Jump movie formula, where you know that the hero will win the day and everything will effectively be "reset", and somehow convince you that these rules are about to be smashed utterly. The film takes you to the absolute brink of believing that this really could be the end of the road for the cast before relenting, and when coupled with its well-crafted secondary characters and an animation style that sensibly eschews detail for fluidity and motion it creates an entertaining, heart-rending and ultimately touching experience that clearly shows Hosoda's mastery of his craft. Whether or not the film is really a thinly veiled allegory for Hosoda's brief time at Studio Ghibli (where he was eventually excused of directorial duties on Howl's Moving Castle by Miyazaki) is open to interpretation, but even watching the film without that slant the result is a superb movie that can be enjoyed and appreciated with next to no knowledge of One Piece beyond what you've mostly likely picked up via cultural osmosis.

It would be melodramatic to suggest that you can take the first two discs in this collection and use them as Frisbees, but Baron Omatsuri and the Secret Island is certainly a good reason why everyone should consider picking up this movie collection so that they can own it for themselves - the other two films are but light appetisers for this hearty main course, and with both a decent video transfer and subtitles there's nothing to spoil your enjoyment of this fine movie. The other two films - and the first in particular - are a little less solid in the subtitle department, with a number of glaring errors or omissions that don't spoil anything but are most certainly noticeable.

Looking at this collection of movies in terms of its component parts, we have two solid 6 out of 10 outings followed by a 9 out of 10 blockbuster, which is where our eventual score for this review comes from - if you're a fan of Mamoru Hosoda's work though (and goodness knows we are here at UK Anime), then this is a part of his body of work that you definitely shouldn't miss.

8
Two average films are followed by a masterclass in how it should be done by Mamoru Hosoda, which provides a must-watch film even for those who aren't steeped in the One Piece franchise.
LATEST REVIEWS