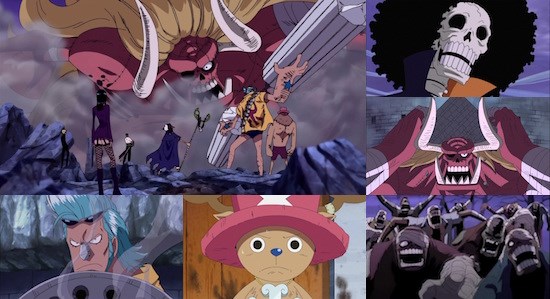 The set kicks off with the “debut of No. 900” which appears to be some kind of giant. Then there are a bunch more characters I’ve not seen before and... oh my god what the hell is happening?  Ok, so it appears the last set started a new arc and we’re now in the middle of it. This may take a little getting up to speed, so bear with me...

Ok, got it, I think... maybe... So, The Straw Hat Pirates have been trapped on Thriller Bark, a giant ghostly ship captained by Gekko Moria, who is one of the Seven Warlords of the Sea. This colossal ship is crewed by a menagerie of monsters, beasts, and zombies. Moria’s devil fruit powers allow him to steal and control shadows, which he uses to steal people’s shadows and embed them into dead bodies, creating the powerful zombies which crew his ship. Somehow he has used this ability on a number of the Straw Hat crew, including Luffy himself. They are now all desperately fighting, against impossible odds, to get back their shadows before the sun rises and hits their bodies, which apparently would be fatal. Though not all is lost as Brook (a new crew member - One Piece Collection 14 certainly must have been eventful) reveals the zombie’s achilles heel: if they consume salt they lose their shadows, which return to their original owners.

Yeah, that still doesn’t make a great deal of sense even now I know what’s going on. Anyway, it turns out Brook has a connection to the Straw Hats that none of them could have guessed, as he is the last surviving (well, as far as being a talking skeleton can be classed as surviving) member of the pirate crew which left Laboon at Reverse Mountain. Which, if you recall, is where the Straw Hats encountered and befriended the very same whale. Unfortunately for the Straw Hats they don’t have time to reminisce, as sunrise draws closer and their battle for survival ever more desperate.

Brook, having also had his shadow stolen, has been trying desperately, but in vain, to win back his shadow by battling a zombie samurai. Just as things are looking bleak for poor Brook, up steps master swordsman Roronoa Zoro, with a big smile on his face and an eye for the samurai's sword. Elsewhere Usopp faces off against Perona, a strange girl who controls ghosts called “Negative Hollows” with the mysterious power to cause despair. Chopper and Robin are dealing with the mysterious Dr Hogback, the one responsible for all of Moria’s enhanced dead bodies. Nami has to deal with the being abducted by a marriage-crazed Lion faced pirate named Absolom. Eventually Luffy gets a bit of a power boost from an unexpected source, allowing him to take on the might of the giant Zombie Oars, which has been imbued with his shadow.

After some pretty decent action sequences (I particularly enjoyed the sword fights), it all finally boils down to Luffy and the Straw Hats vs Oars and Moria, but it seems we will have to wait until the next set for the resolution of that battle. Given where the battle is left I can’t imagine there is much of the arc left to cover, so it’s at best a frustrating place to leave it. Disappointment with the lack of any ending aside, this collection is a pretty solid one by One Piece standards, as is the pace. I just hope the next collection doesn’t prove to be anti-climactic because of the decision of where to cut off this one.

6
A little crazy, even by One Piece standards, but entertaining nevertheless.
LATEST REVIEWS