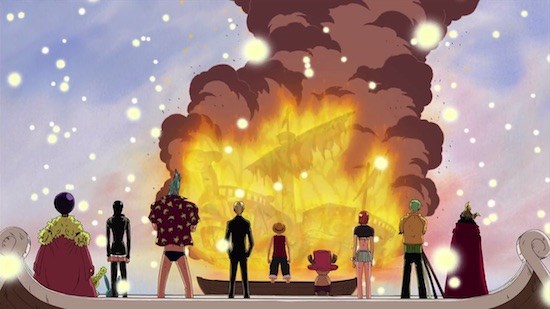 Regular readers may have noted that we were less than impressed with One Piece Collection 12, as a set it crammed in everything that One Piece does poorly and amplified it all the way up to 11. After dragging myself through that dire collection I had been dreading the day when One Piece Collection 13 landed on my doorstep. So when that fateful day arrived and I tentatively popped the first disc in my player hopes were not high that the series could redeem itself...

Thankfully this set represents a massive improvement over the last, the pace finally kicks up as the action in Enies Lobby draws towards a close. Zoro is still battling Kaku, and Luffy is still going toe to toe with Rob Lucci, but I’m happy to report both these battles and more are finally resolved in this set, and in spectacular style. The culmination of the Ennies Lobby section sees the Buster Call in full effect and the Strawhats locked in a fierce battle with a number of marine Captains. All this is going off while Luffy and Lucci are locked in the final stages of their showdown. This section represents One Piece hitting full throttle (well, for One Piece…), with action aplenty in every episode.

Post Ennies Lobby things calm down a bit as the repercussions of recent events begin to take hold back on Water 7. There are some startling revelations to the Strawhats and Galley-La about Luffy’s lineage, as the Marines once again track down the Strawhats. The events of Ennies Lobby and beyond also open up some interesting questions about the make up of the Strawhats crew, including a final sad goodbye to an old friend.

However, not everything here is improved over the last collection. Along the way there are some less then stellar detours, including a particularly poor episode about a missing Yagara, but on the whole this set represents a massive improvement over the last. This is despite the terrible Edo Period filler, which has plagued past sets, making a reappearance here. It is thankfully limited to only one episode and isn’t nearly as bad as some of it’s forebears. All the same old complaints we’ve made time and again about the length of episode recaps and so-on still apply here, but they are at least mitigated by some genuine story progression.

Once again One Piece hits some of the highs of Collection 10 and 11, but alas can’t maintain it for the duration of the collection. All in all this collection represents a marked improvement over the last, and is up there with the best the series has to offer.

7
One Piece almost back to it’s best.
LATEST REVIEWS