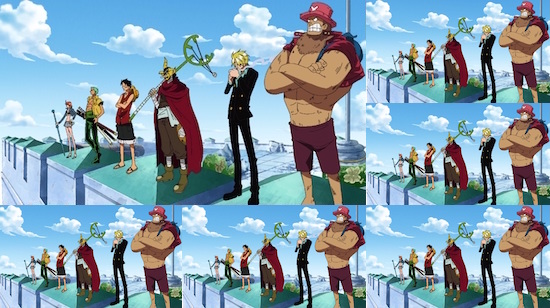 I find myself sorely tempted to write this review in the style of One Piece Collection 12. To do so would make my job infinitely easier, I’d just need to repeat the same introductory sentence over and over again. Maybe I'd throw in a few snippets of insights along the way, just enough to tease but not enough to draw any conclusions. Simply draw that out over 24 pages and you have the perfect recipe for a One Piece Collection 12 review - you would learn the pain and frustration of watching this collection of episodes without ever having to suffer through it yourself.

You may have already gotten the impression that watching these episodes requires extreme amounts of patience, and you’d be entirely correct in that assessment. Here at UK Anime we have complained before about the glacial pacing of One Piece, but in this instance progress has slowed to the point that it is now only measurable in eons. The problem of extended recap scenes at the start of most episodes remains, and when a good chunk of the beginning of an episode is dedicated to recapping previous episodes you know you have a problem with scarcity of content.

This collection starts where the last set left off, with a tale of Robin's past. This occupies the majority of the opening three episodes and doesn’t really tell us anything we didn’t already know. Nor are the episodes particularly interesting, and as such they feel like padding there to add to the episode count rather than anything meaningful. Back in the present and the Straw Hat Pirates are still standing atop a building in Enies Lobby staring down Chief Spandam and the rest of CP9. I hope you like that scene, because you will be seeing it a lot. The 30 seconds or so surrounding that face off are repeated so many times in this collection that I gave up counting.

Eventually Robin comes to her senses and decides she wants to live, so in response Luffy has Sniper King burn down the World Government flag. This constitutes a declaration of war according to the nearby marines. Great, now we’re getting somewhere you might think to yourself, but no. The series now takes us on a five episode detour into the past. That’s five, yes, five episodes of clips from old episodes covering the Straw Hat Pirate’s earliest interactions and culminating with an episode dedicated to Robin which covers events as recent as the last few collections. These recap episodes serve neither One Piece veterans or newcomers. There isn't anywhere enough coherent information there to even attempt to use them to catch up with the series, so they're useless to newcomers, and they are utter anathema to anyone who has been keeping up with the series who will undoubtedly already be pulling out their hair at the show's glacial pacing.

There is eventually a little, tiny, incy-wincy, bit of progression in the ninth episode, but it takes until episode ten of the set before the Straw Hats finally move on from the scene atop that building, having seen it more times than I care to count by that point. We then get to enjoy five further episodes of slow but meaningful progress as the Straw Hat Pirates split up to battle the various members of CP9. However, just when we reach a big moment in the set as Chopper’s battle with one of the CP9 agents reaches a pivotal moment, the action breaks again and we are lead off to Edo period Japan for a couple of awful filler episodes. The rest of the set largely covers the various battles between the Straw Hat Pirates and CP9.

It is these battles between the Straw Hat Pirates and CP9 which offer the real meat of this set, though even they are something of a double-edged sword. While the action is amongst some of the best you will have seen in the series to date, there simply is not enough of it. It is diluted massively by both the slow pace of the show and the constant chopping and changing of scenes to try and cover all the events occurring simultaneously. One minute you could be watching Chopper struggling to hold his own against one of the CP9 agents, another minute you’ll be watching Sniper King and Zoro, another Nami, and another Sanji. Then it will flick to Luffy taking on Rob Lucci for a few hits, then back to Zoro, then... and so it goes on. The result is a confusing mess which serves only to further slow the story’s progress.

There are very few conclusions drawn in this set, a couple of the battles are ended but Luffy doesn’t come anywhere close to fighting seriously and Robin’s fate is still up in the air. This collection, much like the last, feels very much like a lead up to the next collection. Really, that illustrates the biggest problem with this set: it builds up your hopes, it teases how good it could and should be but then it doesn’t go anywhere. If I had to sum up this collection with one word it would be simply “disappointment”.

4
What should be one of the best collections of the series to date is ruined by glacial pacing and badly placed filler episodes.
COMMENT AND DISCUSS
blog comments powered by Disqus