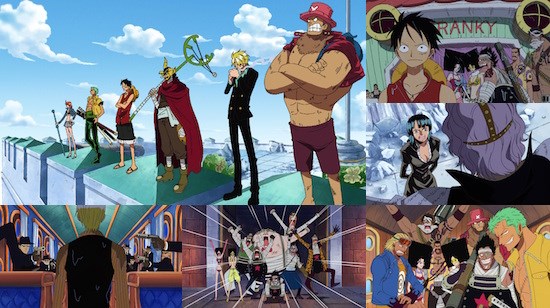 I think it’s safe to say we rather enjoyed the last One Piece Collection here at UK Anime Towers, awarding it the series’ highest score to date and describing it as “One Piece at its very best”. This set of episodes continues where were the last collection left off: The Straw Hat Pirates, Galley-La and the Franky Family are all out in search of Nico Robin. Meanwhile Sanji has tagged along for a ride on the Puffing Tom and finds himself forming an unlikely alliance with Franky and the mysterious “Sniper King”; they really have no other choice once they discover they have a train full of Government agents to deal with. Nami arrives too late to catch the train with Tony Tony Chopper, Galley-La and the Franky Family following close behind. Once the realisation of their situation sets in the gang all go in search of Luffy and Zoro. It takes several episodes to clear up where everybody is and what their next move is going to be - however, it's not long before all thoughts turn back to the task at hand: Rescuing Robin from CP9. Boarding a rather flakey prototype sea train, and braving the worst storm in living memory, everyone departs and sets course for Enies Lobby.

Enies Lobby (or “The Judicial Island”) is a World Government Stronghold which leads directly to Marine Headquarters and Impel Down (“The Great Underwater Prison”). Reputedly home to some 10,000 marines and headquarters to the greatly feared assassins of CP9 - Enies Lobby presents by far the biggest challenge the Straw Hat Pirates have faced thus far, that’s if they can first overcome the challenge of getting there...

It is here that we have to introduce our first complaint about this collection: These episodes take quite a long time to get where they are going. Verbose dialogue, long lingering shots, flashbacks and long recaps litter this collection. What this means is that by the end of this collection we are still not really much closer to any resolution of Robin’s predicament. Pacing issues are something we have mentioned before with respect to One Piece, and it rears it’s head again here to place a black mark against an otherwise excellent collection of episodes. Because of the slow pace of these episodes the collection ultimately feels like it only serves to ramp up the tension for the next collection; this is despite containing some of the best action set pieces in the series to date, including some giants, thousands of marines and one of the Straw Hat Pirates first proper battles with a member of CP9. This results in the feeling of the collection being something of a bridge between the previous and next set, which is particularly drawn into focus by the end of the collection, which consists largely of flashbacks to Robin’s past.

Pacing aside, this collection continues all the best aspects of the previous outing: the action, comedy and darker tones we praised previously all continue throughout these episodes, though a couple of the lesser enemies do fall back into the old One Piece trap of being somewhat ridiculous - a particularly nonsensical Ramen Noodle cook springs to mind. You will quickly overlook such minor irritations however, as some of the most exciting action in the series to date is to be found in this collection.

Individual aspects of this collection are some of the strongest in the series so far, with the action scenes in particular overshadowing much of what has come before. However, these highlights are spread too thin by the almost glacial pacing. This means that One Piece Collection 11 taken as a whole is less than the sum of it’s parts. Had it continued the improved pace of the previous collection we would probably be singling this out as the high point of the series to date, but it takes so long to tell it’s tale that much of the impetus is lost. This leaves us with a collection of peaks and troughs, where the peaks represent the very best of One Piece and the troughs, while not amongst the worst of the series to date, manage to drag the down whole collection.

English 51 and Japanese stereo audio with English subtitles. Extras consist of commentary for episodes 255, 263, 265 and 273, textless openings and closing credits, and an On The Boat – Behind The Scenes feature.

7
Peak One Piece in places, but diluted a little too much to maintain those highs.
LATEST REVIEWS