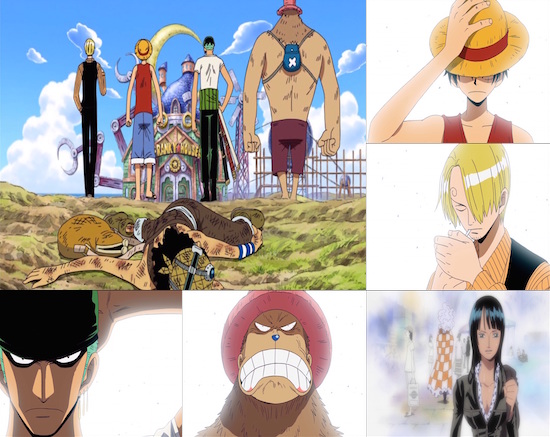 You might recall that One Piece Collection 9 left the Straw Hat Pirates raring to go exploring the city of Water 7, and explore they do in One Piece Collection 10. The crew split up to carry out various tasks in the city: Cash in their booty (no sniggering at the back! - Ed), look for shipwrights that might fix the Going Merry, buy supplies and even just plain old have a look around, with only Zoro left alone to guard the ship. Our piratical protagonists conclude that there is some kind of festival taking place in Water 7, as much of the populace is wandering around wearing masks and fancy clothes.

It isn’t long before Nami, Usopp and Luffy find some shipwrights. Not just any shipwrights mind you, but the best in the city: Galley-La. Meanwhile Nico Robin and Chopper are exploring the local stores, especially the bookshops; that is until a mysterious masked figure whispers “CP9” to Robin. It is this seemingly insignificant utterance which kicks off and fuels much of the rest of the action and intrigue in this collection.

Chopper suddenly finds himself all alone in a strange city as Robin completely disappears - the Straw Hats try to track down Robin but there’s a lot more to her disappearance than simply getting lost in an unfamiliar city. Elsewhere a mysterious gang of ship dismantlers, “The Franky Family”, board the Going Merry with hostile intentions. While they are quickly dispatched by Zoro on this occasion it isn’t the last we see of them in this set by any stretch of the imagination. The Straw Hats also receive some devastating news from the Galley La foremen regarding their quest to have the Going Merry repaired. While they’re still reeling from that news someone attempts to assassinate Iceburg, the Galley La company’s founder and mayor of Water 7. According to the only eyewitness, Iceburg himself, that someone is none other than the Straw Hat Pirate’s resident archaeologist Nico Robin. This leaves the Straw Hats in something of a tight spot as the whole town is baying for their blood, leaving them with little choice but to attempt to prove their and Robin’s innocence while on the run from a multitude of angry mobs.

These events combined begin to take their toll and put a massive strain on the Straw Hat’s relationships. The usual inter-crew banter spills over into something much more serious which threatens to tear the Straw Hat Pirates apart. That's just for starters too; there are so many twists and turns packed into this collection that it is very difficult to summarise without leaking some fairly major spoilers. So, we’ll leave it there for now and instead talk about how different this collection feels to the last few. You’ve probably picked up a little hint about this from the preceding few paragraphs, but there’s a much more serious streak and a darker tone running through this collection and there’s a real sense of peril to match. The viewer is given the impression that the characters are facing some real issues and dangers, that the Straw Hat’s victory doesn’t feel quite as inevitable as it often has in the past. That said, all the trademark One Piece humour and action still runs throughout these episodes, but the darker tone really befits the series and adds a layer of depth sorely missing from the last few collections.

One Piece Collection 10 boasts all the usual extras, such as episode commentaries and clean opening and ending animations, something we should be pretty used to after ten collections. So, nothing spectacular but some interesting fare nonetheless.

English 5.1 surround and Japanese stereo audio with English subtitles. Extras consist of commentary for episodes 233, 236, 244 and 245, textless openings and closings; On The Boat – Behind The Scenes feature.

8
One Piece at its very best: full of humour, oozing with intrigue, packed to the rafters with action, and its darker tone really adds depth to proceedings.
COMMENT AND DISCUSS
blog comments powered by Disqus