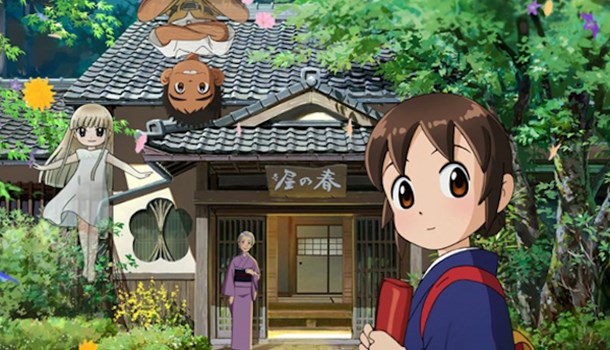 After a tragic family event sees the young Oriko Seki, a.k.a 'Okko' lose her parents; she finds herself taken in by her grandmother who is the proprietress of a traditional Japanese inn. While trying to adjust to her new life and situation she meets the ghost of a young boy, who she also saw at the time of the car accident that killed her parents. The boy reveals himself to be a childhood friend of grandmother's; who wants Okko to help her Grandmother run the inn in order to take less burden off her. Claiming this act to be a favour for saving her life, Okko unwillingly finds herself become the new Junior innkeeper of the family run inn.

The first thing to mention about Okko's inn is it's beautiful backgrounds and colourful aesthetic. The film takes place in the Japanese countryside during Summer and is filled with bright greens. This gives the overall look of the film a rather pleasant calming one that in turn affects the overall tone of the film. The film's main theme is handling of grief and the ways that people seem to act in order to live with it or get over it. The main point of this is seen through the main character Okko's denial of the fact that her parents are dead. Throughout the film we see Okko have several dreams and hallucinations were she interacts with her parents as if they are still alive. These moments suddenly crop out of nowhere which in turn give the film an underlying sad tone as we see Okko work through her pain and sadness in order to not have people worry about her.

Along with this the film introduces a few characters and situations that are in a way similar to Okko's experience. However each character acts in a different way and processes their own situation differently. All of which surprisingly embody one of the five stages of grief. Without giving too much away and fully explaining the movie. Its an interesting thing to note about the film. Tied into this is Okko's experience with the ghosts that she sees in the inn. While sometimes being a cause of mischief for her, which in turn leads to a few comedic moments they are mainly seen as a source of support and encouragement for her. Tied into this are a few distressing and emotional scenes that effectively show how someone can suddenly breakdown after a traumatic event.

On it's surface Okko's inn may appear as a children’s film due to its colourful visuals, child characters and playful jokes, situations and tone. However it delves into really serious themes that many older children and a lot of adults will resonate with. The main one being loss and grief. As unfortunate as it is. All of us will in some way resonate with the themes of this film as we've all experienced loss and grief at some point. While there is a supernatural element on offer to explain some of the finer details, add more of a visual metaphor to things and add emotional support to the protagonist. The main crux of this theme and the aspect the movie gets right is the part where everyday people are trying to get by as best they can after experiencing tragedy. This is expertly handled with making Okko a rather endearing character. She's thrown into a terrible situation but hardly complains or cries about it. Only showing emotion when certain situations push her into anger and remind her of her parents. She tries to live her life and work through her grief by keeping busy at the inn.

This leads into Okko throwing herself into her work and putting herself at odds of another young girl who works at a rival inn. One that takes her job very seriously and is far more experienced than Okko. This character has her great moments where she will show her work ethic by quoting Steve Jobs and Walt Disney among several others. The version screened was the dub version which was very good. All the voice actors fit their characters well. Delivered great lines and managed to provide the emotional acting needed to have certain scenes deliver the right impact. All of this combined makes Okko's inn a rather interesting movie that cleverly deals with the aspect of loss and grief. It is full of charm. Is heart-warming and will emotionally resonate with anyone who has lost someone dear to them.

8
A charming film that deals with grief and loss