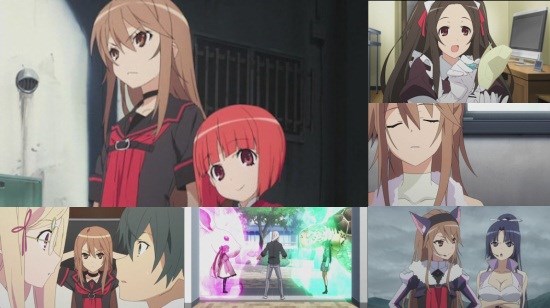 Fairy tales have been a source of inspiration to anime for ages – just as they have been for films, books and pretty much every other source of media. Over the next couple of months alone we’ll see at least one live-action film based upon one as well as two anime – the Sleeping Beauty-inspired King of Thorn and today’s subject, Okami-san and Her Seven Companions. So make sure you’re sitting comfortably and we’ll begin. All together now – once upon a time....

....there was a school which created a club called the Otogi Bank, a somewhat dubious organisation in which the members will help out people in need in exchange for being owed favours which the club will then cash in when required. Working in the bank during this twelve episode series are our titatular group, each of whom is based on a character from a classic fairy tale or fairy tale archetype – Ryoko (Okami-san herself) is the Big Bad Wolf, Ringo is Little Red Riding Hood, Otohime and Urashima are the prince and princess and so forth.

Our story follows the gang as they take on a variety of requests from the student body seeing them do everything from pool cleaning to trying to win a beauty contest. There’s also a running sub-plot about (sigh) the newest member of the group and Ryoko falling in love.

If you’re starting to feel a little drowsy at this point that isn't surprising – the plot is pretty dull and most of its concepts have been seen before elsewhere. The series also has a habit of sabotaging itself on a somewhat regular basis with some truly terrible stories, like an episode where Ryoko develops amnesia or the awfully saccharine episode where the gang searches for a bride for a twelve year-old boy. This episode is so bad that even cameos from the casts of Toradora and A Certain Scientific Railgun can’t redeem it!

The romance subplot is also one of the worst and most pointless we’ve seen in a long time and it really adds nothing to the series except to pad out its running time, taking two characters who are normally good fun and altering their characters so that they can spend time secretly simpering over each other. Even worse, it tries to pull off the stupid trick of Ryoko losing her awesome fighting abilities whenever Ryoshi is within 20 feet of her, whereas he suddenly becomes an amazing fighter. It’s dull, stupid and it feels all too mechanical and formulaic for anyone to get anything out of it.

There are other issues outside the story too. Whilst I rarely play the dub versus sub card, Luci Christian turns in the worst performance of her career as the narrator which doesn’t sound like much till you realise that this means she probably has more lines than anyone else in the series. It sounds like she’s trying to emulate the Japanese actress but she misses by a long shot. On a technical side, chapter point issues plague the release with each episode having only a single mid-point chapter marker - this is incredibly annoying, particularly when each episode has a post-credits epilogue instead of a next episode preview, so having to fast forward through credit sequences to get to it is a pain.

There are also a lot of subtitling issues – some lines don’t appear to be subtitled at all and in most episodes there are occasions where multiple characters are speaking at the same time but the subtitles only display what one character is saying at a time, meaning that you’re constantly left uncertain if you’ve actually been provided with a complete translation of the plot and gags. I wouldn’t really have expected these technical issues on a release coming out a decade ago, let alone now!

At this point anyone would be querying why to pick up this title at all, but hold up a second because the series has a party piece - and it’s a good one! You see, Okami-san is incredibly funny. Whilst the story is, as already stated, a load of pants, the character of the Narrator plays a big part. Voiced here in the Japanese version by a brilliantly on-form Satomi Arai (best known for playing Kuroko in the aforementioned Railgun) she talks almost constantly here, inserting a variety of sarcastic and hilarious comments to which the other characters often break the fourth wall by reacting to. Her gags are inspired and tend to say a lot of what you’re thinking about the characters and events that are occurring (one line discussing fan dis-service had me in stitches!) The same humour is followed through into most of the characters, from Okami-san’s brilliant weapons (all boxers should have cat-face boxing gloves that meow when you hit someone) to Otohime and Urashima’s brilliant relationship which manages to be totally innocent yet blatantly sexual in nature at the same time. It’s this humour which saves the series from being a complete mess and, whilst it can’t make up for everything, it certainly does a good job of trying.

I also have to give a special mention and thumbs-up to May’n whose song ‘Ready, Go!’ is used for the opening theme; its one of the best J-Pop songs I’ve heard for ages and it’ll hang around in your head for ages (a good job, seeing as you can't skip the opening credits! - Ed). Happily, it’s also available through iTunes!

At the end of the day Okami-san and Her Seven Companions is a series that can’t quite manage to pull itself out of the hole it digs for itself. The fairy tale aspect is unnecessary and far too on the nose in most cases and rather than helping to disguise the paper-thin story it emphasises the fact that there’s nothing of note really going on. The comedy, however, does make it worth a watch and you’ll get a good laugh or two out of it, but in a year set to be crammed with some amazing titles it’s hard to recommend a purchase.

English 5.1 and Japanese stereo audio with English subtitles.  Extras consist of clean opening and closing credits, and a trailer for the series.

6
They didn't quite live happily ever after....