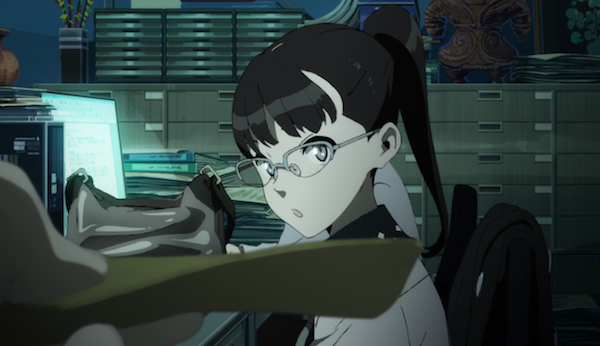 Something strange in your neighbourhood? Something weird and it don't look good? Who you gonna call - A NEET with a failing website and an amazingly irritating friend? Maybe not…

Occultic;Nine is a 12 episode animated series by A-1 pictures, based on a light novel series form the creator of the fantastic Steins;Gate, the under-rated Chaos;Head, and the alright Robotics;Notes. This time, as the title hints, we follow a large group of very different characters as they delve into the world of the occult, following a gruesome murder and the resulting increasingly bizarre and terrifying series of events. There is a supernatural mystery to be solved, and dangers to be avoided, can our disparate group of teenagers survive?

Sitting down to watch this series I was aware of its links to the shows I had previously enjoyed and was keen to see what new twisty, turny, plot the author – Chiymomaru Shikura – had come up with. Much to my surprise this series seems to have been written with on eye firmly on another hit show: Durarara!!. Unlike the previous entries in this loosely linked franchise we have a sprawling cast, most of whom don’t know each other yet. And who all have their own plot-lines to follow, although as the episodes progress the group start to enter each others orbit as the main plot of the series comes into focus. You may have guessed from my earlier comparison to Durarara!! that the show crams a lot into each episode. Especially the first one, which introduces not only the nine main cast members but a lot of their supporting players too, this is not a show to have on while you do the ironing. To be fair the writers do a good job of juggling the cast and keeping things mostly comprehensible in those first few episodes, but there is no escaping the feeling that a lot is being rushed through. I won't know until I see the second half of the series but I suspect that a longer run of episodes would have helped immensely.

The story itself is an intriguing one and the series definitely has a 'just one more episode' feel to it - you want to know what the hell is going on, and that is a good thing for a mystery series like this. The horror aspects are well done too, with a decent amount of blood and gore. Even the attempts at creepiness work a lot of the time. As I seem to be stating in a lot of my reviews recently: the less you know about this show going in the better, as there are a lot of surprising twists that come along. The end of this set had me screaming at the TV and having to stop myself tweeting Manga Entertainment to demand they release the second half of this ASAP. With that said there is a lot going on and, as mentioned above, the real meat of the series only starts to fully emerge in the final couple of episodes, with the rest being used to try and develop the too-large cast, and speaking of too-large…

Ryoka Narusawa - remember that name as it is one that will go down in anime infamy. I honestly don't think I've seen such a misjudged and mishandled character in a show in my long history as an anime fan. Ryoka looks like she has wondered in from another series altogether, or possibly another type of anime altogether, as anyone who has seen her character design could be forgiven for thinking. Her constant bouncing around, yelling, bullying, singing, and general personality are fingernails on a blackboard levels of annoying. She threatens to derail the series at some points, so ill fitting is she with the world around her. The rest of the cast are likeable enough - Yuta Gamon is our nominal lead and runs an occult obsessed blog “Kiri Kiri Basara”, Sarai Hashigama is an overly serious student with a hatred of the occult, Miyu Aikawa is a popular online fortune teller, Toko Sumikaze is a reporter for an occult magazine, Aria Kurenaino is a black magic user with a seriously deranged past, Ririka Nishizono is a dojin writer who seems to be able to predict the future, and Shun Moritsuka is an otaku detective who seems to have a copy of the script to hand.

The animation on show here is fantastic. The series looks great, the best of the franchise in my opinion, and it has a very stylish aesthetic, which works well with the story being told and gives (nearly) all of its cast attractive and unique designs.

My final note is that this is another two part release of a twelve episode show that, similarly to Blue Exorcist: Kyoto Saga, ends on a hell of a cliffhanger. Please see our review of that for my overall thoughts on this backwards step in releases patterns.

7
Occultic;Nine is a great looking series, with mystery and a decent amount of horror. Though one misjudged element really hurts the whole.
LATEST REVIEWS