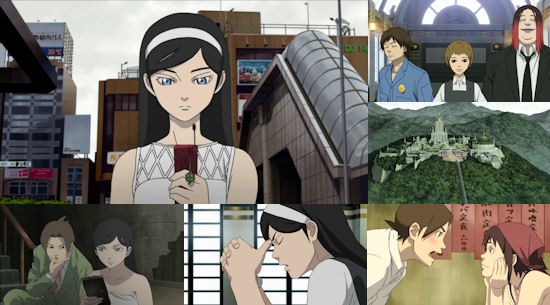 Maya Kumashiro is, I think it's safe to say, a formidably odd girl.  When we first meet her during Occult Academy's opening episode we find her wearing a sleek white dress, only to find that she's wearing said dress to the funeral of her own father; a funeral where she chooses to sit out at the front facing the rest of the congregation with a steely expression mixed with frustration and outright annoyance at this interruption to her life.

Then again, her rather atypical behaviour makes a whole lot more sense once you take into account that Maya's father is the creator of the lavish Waldstein Academy, an institution which has gained the moniker of Occult Academy due to its role in investigating all things occult and paranormal.  This makes it far from surprising when the funeral of Maya's father turns into a chaotic hunt for a rogue spirit, and before we know it the occult-hating (or so she claims) Maya is left in place as the new principle of Waldstein Academy.

As if dealing with errant spirits stealing the body of your own dad wasn't enough, Maya finds herself  visited by a naked man beamed down from the sky who purports to be from the future, returning to the year 1999 (where the mainstay of the series is set) to try and prevent a future alien invasion.  Obviously such a ludicrous story isn't exactly music to Maya's ears, but nonetheless she ends up forging an uneasy truce with the visitor in question, Fumiaki Uchida, as he searches for the key that could literally save the world.

If all of this sounds like a little too much to take in and enjoy in just three episodes into a new series, then fear not - Occult Academy doesn't take itself seriously in the slightest.  For starters, all of its major characters are largely comical, from the perpetually angry Maya and her penchant for throwing things at the hapless childhood TV star turned secret agent from the future Fumiaki through to supporting characters who are decidedly oddball for one reason or another.  Equally, the series struggles to keep a straight face as it dishes out its plot of ghosts, demons and alien invasions, and occasionally seems to forget about its bigger picture entirely as it finds itself distracted by other more interesting matters which may or may not have anything to do with the wider story.

This lack of respect for or gravitas towards its subject matter gives the series thus far a feel not entirely dissimilar to the Ghostbusters films - Yes, there are important and potentially apocalyptic incidents ticking away in the background, but that shouldn't get in the way of a bit of slapstick comedy or making the most of the absurdity of a certain situation in the name of humour.  This works well largely because it's delivered with such energy and gusto - Watching Maya race around looking irritated in her little white dress (which threatens to steal the show in its own right, if I'm honest) setting chaos and conspiracy loose around her while berating anyone within fifty feet is incredibly entertaining in its own right, offset by her new partner in crime's penchant for good curry and a nice pair of breasts.  It's a combination that, coupled with the whole supernatural angle, allows for plenty of good sight gags, and Occult Academy rarely misses those opportunities to raise a laugh from such moments.

The only question which remains at this point is which direction the series will choose to pursue as the show continues - The serious story angle is still very much present, and there's a danger that Occult Academy will get bogged down in that and forget its sense of fun later in the series.  I genuinely hope that it doesn't however; as it stands, Occult Academy is a knowing mixture of the absurd and impossible that's a delight to watch, and I can't help but think that Maya and that dress are going to live long in the memories of anime fans if her character continues as it has to this point.

8
As a humorous, light-hearted slice of supernatural insanity, Occult Academy so far is great fun to watch.
LATEST REVIEWS