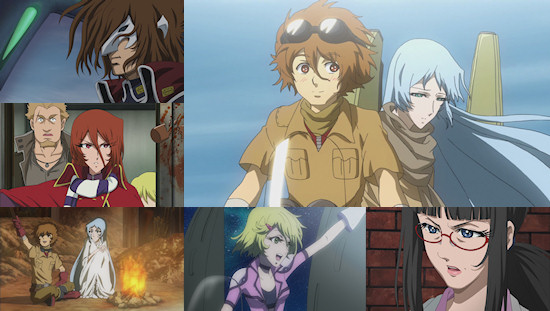 For many if not most of you, I would imagine that Leiji Matsumoto's name requires no real introduction, whether it's for his work on Space Battleship Yamato and Galaxy Express 999, or his more contemporary place in western consciousness thanks to his Interstella 5555 collaboration with Daft Punk for their album Discovery.  Given his well-known, bankable name, it's no huge surprise that Matsumoto was invited to create and produce a new series to celebrate the 20th anniversary of a Japanese TV broadcaster - fortunately, it's also being made available worldwide, with Crunchyroll and start-up company Viki both streaming the series with English subtitles.

With a script supposedly over thirty years in the making, expectations are high for what this series can deliver, and right from the off this Studio GONZO co-production simply oozes an old-school Matsumoto vibe via its striking character designs, the world which these characters inhabit and, most importantly of all, the technology which they deploy.  Speaking of OZMA's world, this is certainly not a depiction of the Earth at its best, instead treating us to a post-apocalyptic view where the entire planet has been turned into little more than desert, and with the vast majority of life (humans included) on the brink of extinction in this harsh environment.

After a brief voice-over introduction, we're thrown into the midst of this world alongside a young lad named Sam Coyne, a member of a ground of "sand pirates" with an eye for catching the "Ozma" of the show's title, a mysterious kind of sand whale that both threatens and fascinates in equal measure.  On this occasion however, Sam's thoughts soon turn elsewhere, as he finds himself caught up in an attempt by the military faction known as Theseus to capture an escaping young woman.  Being the caring type, Sam decides against leaving the girl to her fate and instead rescues her from the clutches of her pursuers before taking her back to the ship which he inhabits with the rest of his crew.

While we learn the girl's name soon enough (it's Maya, incidentally), everything else about her remains shrouded in mystery - all we *do* know is that the military is willing to stop at nothing to reclaim her, leaving our crew of pirates needing to take desperate measures to avoid becoming target practice.  This also allows us to witness one of the more intriguing aspects of the series, courtesy of craft that effectively act as submarines of the sand, diving beneath the desert to travel around while generally acting just like a submarine when it comes to avoiding detection and attacking or being attacked.

It's only when we reach the third episode that the mystery surrounding Maya and Theseus desperation to claim her back begin to be explained, set against a story that feels a little predictable but at least fits in with the concept of humanity on the brink of extinction - either way, it seems as if there's plenty of adventure left in Sam when it comes to saving and protecting Maya, while also keeping an eye on his ultimate goal of capturing Ozma itself, which is clearly going to have a big part to play in proceedings moving forward.

Given the largely mysterious setting and characters (we don't really learn a huge amount about any of the characters or the intricacies of their setting), these first three episodes of OZMA are rather tricky to evaluate, as only time will tell whether this slow but sure build up will ultimately pay off for the series.  Having said that, there are certainly plenty of interesting facets to try and draw viewers in to these early instalments - the sand submarine idea sets up the potential for some tense stand-offs a-la "U-571 in space" (the first episode demonstrates this quite nicely), while even the show's animation feels fresh and something a little different to the norm by nature of revisiting the animation style of days gone by rather than using more modern-looking character designs.  On the other hand, the show's humour and characterisations also feel retro, but this time towards the point of feeling a little old hat, which could prove to be to the series' detriment in the long-term.

For now though, OZMA remains an interesting proposition - a blast from the past in terms of aesthetic and concept but given a fresh coat of paint thanks to modern animation technologies.  If you're the kind of person who looks back with a wistful sigh and wonders why they don't make shows like Galaxy Express 999 or Captain Harlock any more, then checking out OZMA is an absolute must as you're bound to get a nostalgia-led kick out of these first few episodes.  Newcomers to anime might be put off by the exact same elements which will thrill older fans, but if these episodes can lead in to a strong, well-paced and thought out story then it might well win them over.  Whether the plot and concept of OZMA will stand up to that scrutiny in the long run remains to be seen as it's simply too early to say right now, but if nothing else it has the building blocks in place to create an enjoyable adventure with classical sensibilities.

You can currently watch OZMA in streaming form via Crunchyroll.

7
Its visuals and concept will thrill fans of Matsumoto's other works, but it's still too early to say whether OZMA has a strong enough plot and characters to back up its promising premise.
COMMENT AND DISCUSS
blog comments powered by Disqus