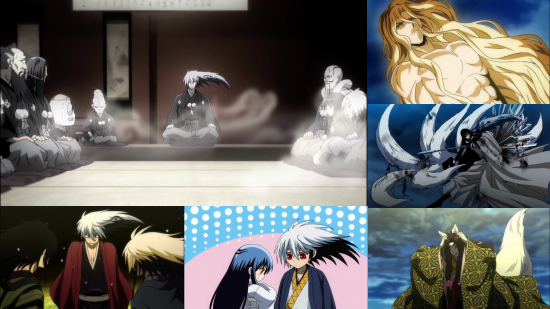 Two seasons and 36 episodes lated, its finally time for Rikuo to mature, realise his true potential and become the third heir to the Nura clan. He has had a long journey and, although young, will he now prove himself as a true leader and heir to the clan's leadership?

We return to the situation at the end of part one -  Kyoto has been overrun by the yokai armies of Haguromo Gitsune, whose as-yet unknown plans have brought on the defeat of the onmiyoji and the defences that had held for generations. Her armies have destroyed many of the city’s shrines and sacred places where the souls of vanquished monsters were imprisoned and she is about to embark on a mass culling of the human “vermin” who now occupy the streets of the city.

As a member of this vermin race, I am thankful that there are those amongst the yokai who consider humans to be equals and not just a source of food. Rikuo Nura, our 12 year-old, part-yokai hero will save us! His night parade of a hundred demons, supported by their flying galleon, has arrived in Kyoto to assault and hopefully put an end to Haguromo Gitsune’s nefarious plans. At least, that was the aim.

So far, however, thanks to the scale and almost unstoppable nature of her army, Rikuo and his night parade find themselves defeated in their first real conflict thanks to the almost unstoppable might of Tsuchigumo, a giant yokai whose carnal desire is to fight someone stronger. He defeats Rikuo and the night parade in a moment thanks to his overwhelming fear, leaving Rikuo in a bind. Although Rikuo has better control of his yokai self, perhaps it wasn’t the yokai that was providing him with power? While he fights Gyuki to improve his abilities, Haguromo Gitsune is preparing to give birth. Her child, the yokai reincarnation of a being named Abe no Seimei, is a former onmiyoji and whose mere presence will bring about the destruction of the human race as he strives to create a world only for yokai. As our only hope, Nura needs to unleash his full power, unite his yokai clan and bring down this terrible beast and her offspring before they destroy us all. Can he do it or will the reincarnated son-of-a-fox Seimei, also known as Nue, be the end? Will Nura have the strength to defeat his giant foe and lead his night parade against Haguromo? There's only one way to find out!

One of the attractions of Rikuo as a character, at least in my opinion, is his bloody mindedness and the fact that in nearly all of his initial encounters, the kid is always the underdog. Although in this series Rikuo has worked out quite a lot of his abilities - he has learned the power of fear and how to use his powers of invisibility, and although he has a lot of confidence, he is still just a 12 year-old boy in a world of thousand year old monsters. So I find it quite entertaining to watch as he, in true Shounen Jump style, works hard, trains, and eventually hands the smack down (at least most of the time) to those deserving a just punishment. One of the attractions of this final part of the second series, has been the development of the show's back story. Haguromo Gitsune is not only the foe of Rikuo’s grandfather but, as it turns out, is also the murderer of Rikuo’s father. The intertwining of the destinies of the Nura clan and the onmiyoji is almost incestuous. The glee of watching these multi-generational fights be resolved is equivalent to spending many moments with a good bottle of gin. Yes, this has been a highly satisfying series and was worth the build-up since that first episode many months ago.

Series two of Nura: Rise of the Yokai Clan has so far turned into a continuous festival of action and chaos with only small moments of comedic pause to allow us to rest during an otherwise busy time, such as the reading of Tsurara’s rather special letters to Rikuo. Bless.

One of my consistent comments with the series is the quality of the acting on the English dub. Nura is another of those series which has been well produced by an experienced cast of English speaking actors and is, in my opinion, as pleasurable to watch in English as it is in the native Japanese.

What we have here is one of those rare occasions in anime: A satisfying conclusion. 52 episodes ago we were presented with a boy - he was weak, of mixed blood and was standing on a precipice between being a human and being a yokai. What we have now is the leader of a yokai clan who is in touch with the balance between his human blood and yokai heritage and with a mission to prepare, within a year, for the return of the new enemy, Nue. Even at the beginning of the second series, I for one, did not see this coming, nor did I see Rikuo coming so far. Fingers crossed we get a third season someday.

English and Japanese stereo audio with English subtites. The only extras here are clean opening and closing credits.

8
An action-packed finish to the series.