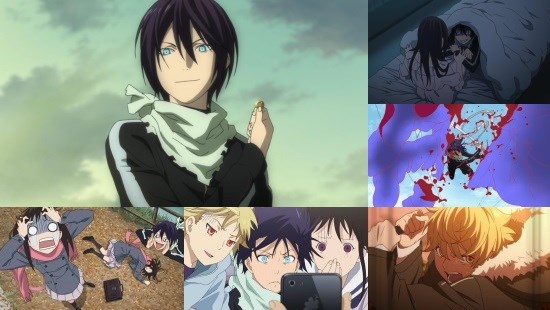 Yato is a god who one day dreams of having his own shrine and devout following. Having no followers or worshippers, he strives to make this dream possible by taking on any odd job that comes his way for the meager price of 5 Yen. One day, while trying to find a lost cat, a girl named Hiyori sees him an attempts to save him from being hit by a truck. While both parties escape relatively unscathed, Hiyori now finds that her soul unexpectedly leaves her body from time to time. Thus, she enlists the help of Yato to help her recover from her predicament, but also finds herself needing his protection from the unwanted attention she is receiving from the spirit world's evil beings who want to corrupt her soul.

At first, Noragami sets itself up with all the usual trappings of your typical "monster of the week" supernatural action show, bringing a character into a monster-filled world they know nothing about, having the world explained to them and showing scenes of ghosts and demons being destroyed. However, where Noragami sets itself apart is that the monster threat isn't actually seen as a threat at all but as a part of the world that only needs to be monitored and controlled. This gives Noragami the flexibility it needs to break out of the mould set by its genre in order to pursue other ventures. The way the show handles this aspect of its story is by explaining how the world is in balance between people from the human world and spirit world coexisting with each other. The roles of gods are explained to Hiyori, who finds herself caught in a divide between worlds due to the accident she had, forcing her spirit to leave her body. Along with Hiyori we're introduced to another cast member, Yukine, who is unfamiliar with the world but is given a more direct role and part to play in the proceedings.

This in turn leads to Noragami morphing into a rather poignant character study on pain, loss and how one's actions have an affect on those around them. This is mostly shown through Yato, the other gods and Yukine's daily lives and relationships to each other. Since Yukine is a servant to Yato, his actions have a direct result on him, even causing him physical pain at points. Noragami deals with this is in a really nuanced way by showing the subtlest of hints in Yukine's disposition but also showing the result and outcome of his actions directly on Yato by having him bring attention to them in various ways. Thus, the series not only drills deep into its characters but also works to develop them in a way that shows them as very flawed yet human individuals. There are quite a few conversations where characters will discuss aspects of others and their pasts, which gives a bit of depth to why characters act the way they do. This mainly ties into why Yato acts as a god for hire, doing odd jobs for the other gods at a very cheap price.

While these conversations provide most of the shows substance there are quite a few action scenes and comedic moments interspersed into things to keep things moving at a steady pace. The comedic moments in question tie into Yato's odd jobs that he does. These are seemingly random requests that range from demon slaying to cleaning a bathroom, all of which he gets paid 5 yen for doing. Also Yato is a character that flips between being very comedic and flippant to deadly serious making most of the cast in question not take him seriously or look down on him at times. Tied into this is the unreliable impression he gives off to the other Gods and spirits in the show when it comes to being able to support himself and provide for others yet the other Gods recognise his talents and abilities. With regards to the action the majority of it is Yato slaying various evil spirits that take the form of blob like monsters. The animation is sold enough to showcase some flashy moves by Yato when fighting. There are a few fight scenes between Gods where the best of the action is on display. The unfortunate thing regarding this though is that there are very few instances of this. That being said the main draw of the series is not the action but the characters themselves.

The series does a great job of using its supernatural setting as the basis to establish and develop the characters in the show. There is a complete outsider looking in, someone trying to integrate themselves into the society but finding great difficulty in doing so. and an established society in the form the gods. This provides great dramatic moments which really tie into the story well and give further depth to the characters.

It should also be noted that the DVD version is encoded in 60Hz and not 50Hz. Given the lack of UK specific company logos and a copyright warning from the FBI suggests that the DVD is made whole cloth from FUNimation Entertainment's North American masters. The set does have proper chapter markers in place, avoids any PAL speed-up issues and for a DVD looks rather decent when upscaled to an HDTV. Also of note that the series has a very good English dub. The English voice cast do a good job hitting the right notes with comedic moments but also do well in the show's more dramatic moments.

For those wanting a supernatural action comedy show with a lot more substance than the usual fare, Noragami has a lot to offer.

English 5.1 and Japanese stereo audio with English subtitles.  Extras consist of US cast audio commentaries for episodes 6 and 9 , US cast video commentary for episode 4, text-free opening and closing songs, US and Japanese trailers for the series.

8
A supernatural action series for those wanting something with a bit more substance.