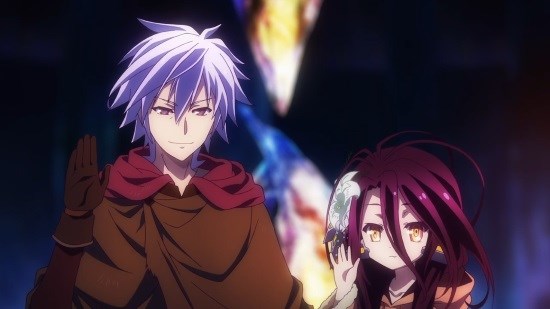 It’s been 4 long years since the excellent No Game No Life first aired bringing its crazy game-fuelled world to life as Sora and Shiro introduced the innocent denizens of Disboard to underhanded tactics and fan service. Finally Madhouse has answered fans and brought us a film follow-up to the series in No Game No Life Zero coming to UK via MVM. So, lets dive right in, shall we?

Our story opens on familiar ground as cat-eared priestess Izuna plays chess with Tet, Disboard’s eccentric God of Games and over the course of this Tet decides to tell her a story about proceedings that happened 6000 years ago that led to the current state of the world. That's right, we’re in prequel town.

Thousands of years ago the races of the world were in a constant state of war as each race attempted to get their own god elevated to being the one true god via possession of a magical macguffin. All that is, except humans. Not because they were too noble to get involved but more because they were much too pathetic having suffered the greatest from the fallout of the war and the deadly black ash that covers their lands. The leader of these humans, Riku is forced to make life or death decisions everyday weighing the lives of his people against one another. One day however things change as he encounters a being from the race of Ex-Machina (subtlety isn’t really in the cards for this film) whom he dubs Schwi. With her help Riku decides that it’s time for the war to end and he leads his people on a disinformation campaign against the other races to drive them against one another to create the war the end all wars.

I want to state up front that this is a good movie. (What, did Dan just say that - Ed)

In fact this movie comes close to being great. The story is good, it’s well-told and it’s solid sci-fi through and through. I want to make that very clear because what I’m about to say next might make that fact be a little over-looked.

The thing is that, well, I can’t for the life of me work out who this film is for…

Fans of No Game No Life, whom I count myself as being amongst, frankly, don’t really care about a prequel back story. Disbord is an awesome setting and how it came to be is not foremost in my mind when I’m watching the series. What we want is for the story of the series which, as you may recall, ended on a MASSIVE CLIFFHANGER, to continue. (Yes. A season two would be nice! - Ed) We want to know what happens next! Doing it this way is kind of like if Avengers 4 came out and ended up being an alternate universe comedy about Sony Tark and his coffee shop. (Starkbucks?! - Ed)

No Game No Life: Zero is based on the sixth light novel of the franchise. Whilst the story is based on the original work, given that the series only covered the first 3 books there must surely have been a better plot to adapt, maybe books four and five for example? The only way it would make sense would be if it were as part of an attempt to get new people into the franchise to generate some buzz but honestly, I can’t think of a worse idea. Someone totally new to this franchise must just end up so utterly confused. Firstly, people who are new to the franchise are unlikely to go see the film anyway given that it has the name of an established franchise in the title. Secondly all the characters look exactly like the characters from the main series and lastly, the plot keeps making odd references to things the audience is so obviously expected to know as either a call back to the series or an in-joke.

I would in fact argue that this film has so little to do with No Game No Life, that you’d have a vastly superior film if you just cut out all references to it. Certainly, the connection to the main series doesn’t add anything to proceedings. You don’t get any big insights into either characters or events by watching it rathe and I think that the film suffers because of the continuous gags and references which you wouldn’t ordinarily see in a sci-fi film. It’s like Blade Runner stopping every ten minutes so Harrison Ford can do a Marx Brothers routine.

The bizarre choice to make all the characters look almost totally like the main cast of the show is not the best creative decision in my opinion. Not only because it confuses the audience before they’ve even started watching but also because the plot ends up having to bend over backwards to accommodate them.

The romance between Riku and Schwi in particular keeps having to stop and repeat the incredibly contrived reason that they can never in any shape or form have any real physical side to their relationship not because such a relationship would hurt the film (rather it would strengthen it immeasurably), but because they insist on mirroring the relationship between Shiro and Sora in the main show where they’re brother and sister.

While I seem to be griping a bit, No Game No Life Zero is an excellent movie and I do reccomend it. Madhouse have handled the production well and the whole thing looks fantastic from beginning to end with some bonkers action sequences and super-fluid animation. The same creative team from the original series are behind the movie which includes Atsuko Ishizuka whose resume includes one of this year’s best shows – A Place Further Than the Universe. Both the Japanese and English dubs are solid though both continue the confusion by having the same voice actors as the original series for some roles (eg Riku and Sora).

If you’re going to watch this film, and again I think you should, then you’re probably best off trying to pretend you’ve never seen the original and trying to ignore anything that's to do with it. If you can then you’re left with a very respectable and solid science fiction film that will keep you more than entertained with its excellent production.

Behind the scenes of the English adaptation

8
Solid Sci-fi overcomes an almost total lack of connection to the main series.