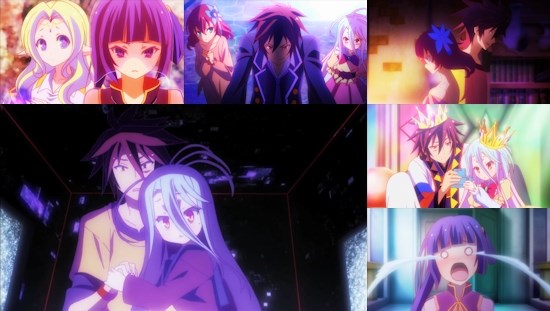 I'm sure that most of us enjoy a good game of some variety or other to while away some of our spare time (writes this reviewer while trying to rub the sleep from his eyes after another mammoth Persona 4 Golden gameplay session...), but for some this mere hobby becomes an obsession to the detriment of everything else.

This description could certainly be applied to "Blank", a gaming powerhouse who are notorious for remaining undefeated in every game they've ever played no matter the odds. While most assume that Blank sports a large collective of talent members, the truth is that they are in fact a sibling team comprising of elder brother Sora and younger sister Shiro, a pair who perhaps unsurprisingly given their proclivities live their lives at shut-ins, keeping well away from the real world to stick with what they know best.

All of this is about to change however, as a seemingly random and confrontational challenge to a game of chess (which the pair wins, naturally) sees them transported to another world by a being known as Tet. Compared to the harsh realities of their real home this new world, Disboard, seems ideally suited to their tastes, for this is a world where literally everything is decided by playing games of some description - whether it's procuring good or defeating entire nations, every aspect of the world is governed by a simple set of rules that prevents violence in deference to deciding matters with a battle of wit and skill.

Dumped into the world with nothing, it's left for Sora and Shiro to put their game-playing abilities into immediate action, and before we know it the pair become embroiled in the struggle for the land of the Imanity, the lowest race on Disboard's societal ladder. With no notable powers or traits to speak of, it seems as if Imanity has nothing in their locker to prevent them from becoming the victim of another race's land grab, try as their heir to the throne Steph might try. Perhaps all they need, however, is a sharp mind with a keen eye for gamesmanship or two to put them back on track?

Based on a series of light novels, it's easy to initially roll your eyes at aspects of No Game No Life's core concept and delivery - the story of a brother and sister who are oddly close to one another and are also shut-ins feels like an exercise in flag ticking, and some of the early episode's descent into fan service leaves us with a frown on our face (we could really do without panty shots of an eleven year-old, thanks). It would be easy to dismiss the series out of hand at this juncture, but that would be a real shame - dig a little deeper and there's a lot of enjoyment to be had from the show.

The primary source of this entertainment comes, unsurprisingly, from the games that Sora and Shiro become drawn into within Disboard - this is where the show is allowed to shine by pushing against the rules that its world has laid out, and similarly Blank's not-so dynamic duo are allowed to shine by fighting for victory in the face of the various twists and turns that are thrown their way. The result is somewhat akin to a low-rent, light-hearted version of Code Geass, as Sora in particular proves to be a dynamic (unbelievably so, considering he's also supposed to suffer from crippling social anxiety) lead as he out-talks, out-thinks and outsmarts his opponents in occasionally delightful ways. Provided you can swallow this loner suddenly becoming such a dynamic and forceful personality, you'll most likely have a good time with this aspect of the show, even if its more titillating elements occasionally threaten to overshadow them needlessly.

Things are helped along ably by Madhouse's presentation of the series - No Game No Life's fantasy world is neither original nor particularly striking, but the show's visual aesthetic and slightly surreal colour palette make it seem far more original than it otherwise would be. Character designs are strong and the overall animation quality are acceptable and deliver everything required of it without issues. The series also boasts a strong soundtrack which is occasionally over-used (or simply used too aggressively), but still represents one of the better incidental music offerings of the spring season.

Taking its opening batch of episodes as a whole, No Game No Life is admittedly a mixed bag - there are times when you'll be left grinning and clapping your hands with glee at its machinations, and others when you'll find yourself giving a weary sigh as the story veers off to deliver some stereotypical wish fulfilment fodder to try and keep the viewer happy. Thankfully, as especially as we moves beyond its formative attempts at weaving a narrative, No Game No Life succeeds in getting its balance right - it still indulges itself in flashing female flesh and the like but does so in a more measured way, and the progression of its story is satisfying to watch and seems to offer plenty more moments that should play to the show's strengths over its second half. It's no classic, but if you're after a series with just enough sassy smarts to keep you hooked this spring, then No Game No Life may fill that void for you.

You can currently watch No Game No Life in streaming form on Crunchyroll.

7
It can frustrate at times during its early running, but taken as a whole No Game No Life provides more than enough entertainment to make up for its flaws thus far.
LATEST REVIEWS