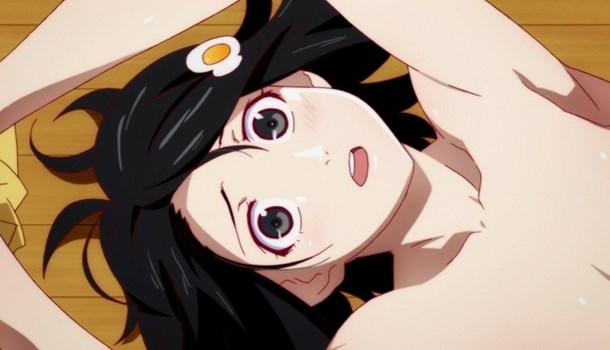 Sometimes it’s nice when a delay works in our favour. Thanks to a long wait from its Japanese airing we now get to grab Nisemonogatari just weeks after the release of Bakemonogatari on Blu-Ray, meaning that everything is still nice and fresh without having the need to trawl through the dusty shelves of your memory to remember if Bakemonogatari was the really good one or the one with fake Stretch Armstrong in that you didn’t like very much. As release plans go it’s really worked out well for fans of this great SHAFT series, and one can only hope that MVM’s working behind the scenes to get Nekomonogatari and Monogatari Second Season out to us in short order.

Open on a man in chains. Why he’s there we don’t know. We do know who put him there though and we know that they’re working to put him through mental torture as erotic as it is agonising - all, so she says, for his own good. Welcome back Senjogahara, we’ve missed you. After being all but absent through the latter half of Bakemonogatari it’s good to see some time spent on the relationship between her and our most unusual ladies man throughout this arc. From a little light bondage to the kind of bizarre, absurd conversations that you only find in the Monogatari universe this is a relationship that the series is truly happy for you to look in on and be in turns both envious and very glad you aren’t in Araragi’s shoes, and that’s a really fun way to go - a very good thing as it's this relationship that forms the core of this first arc in Nisemonogatari, despite it theoreticall being the introductory arc for Araragi’s younger sister Karen. The eldest "Fire Sister" (as she is known) certainly gets to play a leading role here but don’t be fooled, she’s really more of a device to keep Araragi involved in Senjogahara’s plot line which delves back into her past and the identity of Kaiki, a seemingly dangerous man who will twist everything he’s told to his advantage. I hesitate to call him the villain of the story as things aren’t quite that black and white here - few things in this franchise are - but he’s certainly an intriguing antagonist for our leading pair to interact with.

Elsewhere, fans of the rest of the show's cast will not be left wanting here as each gets a great scene (or scenes) allowing them to shine, though the featured roles go to tsundere vampire Shinobu and the Fire Sisters Karen and Tsukihi, who for all intents and purposes are new characters here given their limited appearances (or speaking roles in Shinobu’s case) in the first season. Its these moments with the secondary cast where the series truly shines as they allow the cast to really go all out thanks to the ever-increasing levels of absurdity the writers conjure up, whether its Hachikuji’s double act with Araragi, Suruga’s attempts to shock with escalating suggestions of perversion or the insane fear that Hanekawa can instil in other characters with the merest word. The voice cast (Japanese-only again here folks) really seem to enjoy themselves in these roles and pull out all the stops to keep the energy high throughout.

Where things do fall down a bit though is in the consistency of the storytelling. The Kaiki/Senjogahara/Karen storyline manages to feel both overly long and too brief while it runs its course, as a lot of the set-up keeps getting interrupted with what are essentially short films involving the side characters which have very little bearing on the rest of the plot. Karen’s story is explored but never lingered upon beyond expressing that Kaiki is a bad guy, and you never really get much of a sense that she’s in any real danger at any point (especially given what she does to Araragi in the course of one of the later episodes). Senjogahara's storyline also suffers from a pretty muddled and oblique opening act, and the epilogue of her storyline is cut entirely leaving the viewer to fill in the blanks themselves (which in this show probably means we’re all 100% wrong), which is somewhat disappointing and robs the story of part of its emotional climax. At the same time the monologues and almost theatrical conversations through which the main plot is told can get very long winded with very little action occurring on screen, with the animators pulling a variety of visual tricks to try and keep you engaged with varying degrees of success. It’s certainly disappointing after the fun and energy of the side character plot threads.

Visually of course things look brilliant here, but at this point saying s SHAFT show looks good is like pointing out that the sky is blue - it’s just become one of those facts of life (though it has set them up for a bit of a fall if their standards should slip). The action on-screen aside however things are running a little more normally than last time, with the massive info-dumps of subtitles found throughout Bakemonogatari being largely absent here as visual puns and gags take their place alongside some not-so subtle breaking of the fourth wall. It is worth noting though that the age rating on the disc is very deliberate here, so be warned – SHAFT know exactly how to push all your buttons and they will do so with glee (and if you think that part one's bad.....) - definitely not a show for younger folks!

Whilst this certainly isn’t the breath of fresh air that its predecessor was, and whilst it certainly isn’t a show that you’d want to use to introduce anyone to the franchise, Nisemonogatari still has enough flair and quirky, bizarre humour to live up to the expectations of its fan base. You’ll certainly be left looking forward to the release of part two early next year, which suggests that the series is doing something right!

Japanese stereo with English subtitles is all we have to say about a release which is otherwise free of extras.