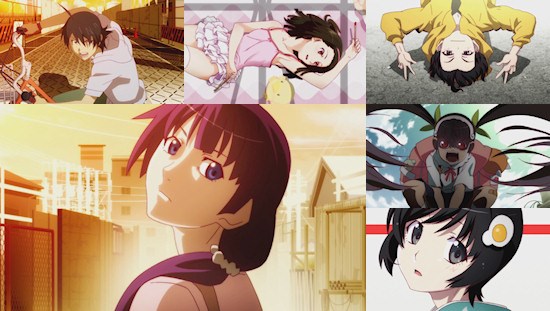 It's almost a nightmare proposition sitting here to review a sequel to a series which never legally aired or streamed in the west at all (much to our chagrin), so for this review I'm going to suppose a few things.  Firstly, I'm going to suppose that you were visiting Japan during the summer of 2009, and found that your impeccable grasp of the language allowed you to enjoy every last iota of the wonders of Bakemonogatari, a series based on light novels by Nisio Isin.  I'm further going to assume that the following summer you imported the final, previously web-only episodes of the show on Blu-Ray, leaving you almost perfectly placed to sit down with your Crunchyroll account to enjoy Nisemonogatari, this winter season's follow-up to Bakemonogatari.

To be honest, if you're not familiar with Bakemonogatari and don't mesh with the above assumptions, then you'll be hard-pressed to "get" Nisemonogatari at all.  However, I shall try my best to run over the basics of what you missed here.  Essentially, Bakemonogatari was the story of Koyomi Araragi, a high school student whose life is turned upside down (with every pun intended) when he's turned into a vampire.  Although most of the effects of this misfortune are reversed by a kind yet eccentric man named Oshino, Araragi maintains an incredibly fast rate of healing and, perhaps, an innate ability to draw the supernatural towards him.  Thus, over the course of the series, Koyomi comes into contact with a number of girls, each of which are "cursed" with some kind of supernatural element or other brought about by their personal circumstances, and each of which our protagonist refuses to leave alone until he's helped them to overcome their issues.

While the stories are well thought-out, exquisitely presented and snappily written, it's the dialogue and characters that really made Bakemonogatari such a massive hit - many of its main players are outright fascinating as they bounce off Araragi's helpful demeanour, with lots of great dialogue and pop culture references to power a series that never fails to entertain and amuse.

Along those lines, existing fans of the franchise should already know what to expect from Nisemonogatari - the series begins with Koyomi's now-girlfriend Hitagi Senjougahara, who seems to have kidnapped her boyfriend; a point which is almost secondary to the sparkling dialogue which flies between the two of them, taking in everything from Evangelion references onwards.  It's an able demonstration of what the series can do as an opening gambit, that's for sure.

Essentially, Nisemonogatari is *supposed* to be the story of the so-called "Fire Sisters" - Koyomi Araragi's two younger sisters, Karen and Tsukihi, whose boisterous attitude and short-temper respectively make them a formidable duo with trouble never far behind.  However, it's only at the end of the third episode that we really begin to get to the meet of the show's first "Karen Bee" arc, with most of the first two episodes in particular used as a re-introduction to the characters we came to know and love in Bakemonogatari, hence my insistence that watching that series is the only way to truly enjoy this one.

Rather than trying to recap who these characters are and why we're supposed to care about them, the first two episodes of Nisemonogatari are an almost literal example of fan service, with each of Koyomi's "harem" of girls save Tsubasa Hanekawa baring both body and soul to the viewer as they josh, jostle and chat with the protagonist - cue lots more fantastic dialogue, offset by plenty of sexual content.  It's hard too know exactly what to make of this tact - some of the sexual elements present are genuinely quite erotic and, thanks to their presentation, they offer a veneer (albeit a false one) of class compared to anime's usual fan service fare.  It's Playboy rather than Reader's Wives, if you will.

Thankfully, over-bearing though this occasionally immature obsession with sex might be, there's still a lot to like about Nisemonogatari.  Let's start with the presentation of the show, which is almost a definition of minimalism to the point where it conversely becomes eye-catching with every single shot.  With lots of oddly framed or angled shots and close-ups set against meticulous, colourful and pristinely derelict backdrops, you can't help but marvel at the depiction of a town which looks like an urban utopia that has absolutely nobody in it.  I've heard director Akiyuki Shinbo called everything from a "genius" to a "talentless" hack over the years, but Nisemonogatari arguably shows his abilities at their best, with an aesthetic that clearly harks back towards Kunihiko Ikuhara's Revolutionary Girl Utena and the like.

It's to the dialogue that we ultimately return however as the real reason for watching Nisemonogatari - although Senjougahara steals every frame of every scene she's in, her female counterparts are no slouches either as they riff on how to make anything sound courageous and literary tastes.  Oh, and play a little Twister too.  Even Koyomi's sisters, who were barely introduced in Bakemonogatari, prove to have plenty to offer in the dialogue department to ensure that every conversation and exchange of banter is impeccably entertaining - great news, given that every last corner of every episode is packed with dialogue.

Its real shame that Bakemonogatari has never found its way outside of Japan legally - it's a wonderful, intelligent series with visuals to match.  From its opening three episodes, it's difficult to be quite so overwhelmingly positive about Nisemonogatari - its outlook is rather more crass and overtly fan service oriented, and plot very much takes a back seat to worshipping its characters during these early outings.  Despite this however, there is still plenty of the DNA of its predecessor running through Nisemonogatari - its characters are unceasingly great to watch, helped along by the show's frustratingly naive but well-meaning protagonist whose simple-mindedness works wonders in terms of bringing the best out of the supporting characters and the dialogue they spout forth.  If you can put up with the excessive sexualisation of its female roster and have the patience to wait for its story proper to kick into gear, this could be one of the better character-driven shows of late - indeed, it's probably the best character-driven show since Bakemonogatari.

7
It gets bogged down in its own fan service and sense of fun in these early episodes, but beneath this lurks striking visuals and a surfeit of razor-sharp dialogue.
LATEST REVIEWS