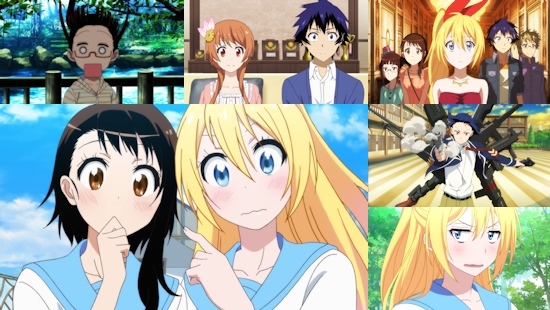 We have to admit that the early episodes of Nisekoi left us a little confused - even as romantic comedies (hardly the bastions of innovation) go, it was piling up the clichés and "by the number" story beats by the minute. Normally this would be a sign of a generic, forgettable series, yet something about this particular offering was different - it was hugely fun, visually striking, and not only entertaining but capably funny to boot.

The good news is that this alchemy continues almost uninterrupted through the rest of the series - it hits every predictable story beat that you could imagine, from a risqué hot springs episode (the closest the show really gets to outright fan service) to building up a growing harem for protagonist Raku Ichijou to vacillate wildly in his feelings for. By the end of its twenty episode run, the show's main plot point of a promise made by a mystery girl a decade previously is virtually creaking under the weight of all of the twists and turns foisted upon it by its growing cast and the need to set up a number of girls as the possible girl with whom that promise is made, but somehow it never quite collapses under that strain thanks to the show's fast-moving focus which stops you from thinking too hard about the logistics of everything that's going on.

The pace and energy of the series is ably assisted by its cast - Ichijou is a likeable lead character who isn't a complete wet blanket for the most part, and the girls that revolve around him as though he is their sun are all strong characters that admittedly lean heavily on their clearly-defined archetypes (encouraging viewers to pick their favourite and root for them in the genre's grand tradition) but still have enough personality to break out of simply being cardboard cut-outs. By the end of it all, you'll genuinely care about some if not all of these characters, allowing it to employ some unsubtle but no less effective emotional moments to shake things up when the story requires it.

After seeming overbearing at times during its early episode, production studio SHAFT quickly grow into presenting Nisekoi with lots of visual panache redolent of their usual house style, but without over-doing things to detract from the characters or events as it initially threatened to do at times. It's the show's visuals which also do a lot to add to its humour, injecting an ever-increasing variety of incredulous reaction faces which become half of the fun of watching the series at times - throw in some random Evangelion references centred around a character sharing his voice actor with Gendo Ikari, and you have yourself a winning formula. Even outside of its visual flourishes there's some great dialogue and witty one-liners sprinkled expertly throughout to bring lots of laughs to the table, and the romance side of the series is never allowed to dominate over the comedy which is clearly such an important part of its successful formula.

There really isn't a whole lot more to say about the series other than the above - it sticks rigidly to its tried and tested formula and only changes things up by adding more female characters to its roster, but Nisekoi is undoubtedly a series that knows exactly what it's doing in terms of romance, drama and comedy, and also knows exactly how best to blend those elements together to provide boundless fun. Perhaps at least part of its success is down to the fact that you don't see many harem comedies these days that are quite this traditional - most other similar series of late seem to feel that they need some kind of other "hook" to progress its story and keep its cast together, while Nisekoi knows that the best romantic comedies come from simply throwing a bunch of individuals together within a loose framework and letting things develop from there. Above all else, its perhaps this traditional feel that actually works in Nisekoi's favour to make it feel fresh and unique - while everyone else is invoking aliens, special powers or action to supplement their harem comedies, Nisekoi remains grounded in some semblance of reality (albeit a heavily idealised one) and is all the richer for it.

If series of this ilk have always left you cold then Nisekoi won't be the show that changes your mind, but if you hold fond memories of the likes of Love Hina and bemoan that they don't make them like they used, the good news is that they do, and its name is Nisekoi. Provided you aren't expecting anything original and are just looking for some laughs and some lovable characters to cheer on, provided via some colourful and striking animation, this is most definitely a series for you.

Although of course there's only one character to cheer on, and that's Chitoge Kirisaki, right?

8
You'll have seen everything this series has to offer before, but possibly not in such an entertaining and appealing package.
COMMENT AND DISCUSS
blog comments powered by Disqus