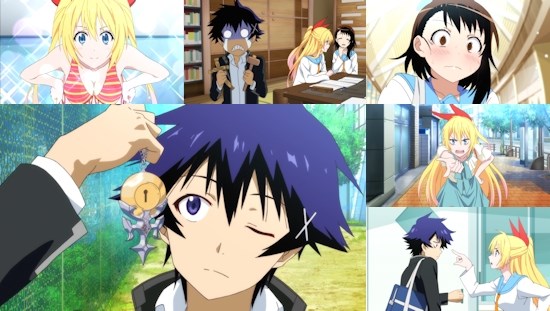 It's tough being a teenage boy at the best of times as the pressures of school, family and girls all combine into a noxious mixture combine with the hormonal upheaval that is puberty to threaten all kinds of chaos. Imagine, then, trying to be an ordinary high school boy when you are, in fact, the son and heir to the head of a family of yakuza.

It's this situation which faces our protagonist in this new manga adaptation currently streaming on Animax UK - Raku Ichijou is a studious, earnest lad whose experience with the fairer sex is limited to a promise he made ten years previously which he still holds close to his heart; quite literally, in fact, in the form of a pendant to which the otherwise long-forgotten girl in question holds the key. Still, with his yakuza extended family kept at arm's length and his eyes very much focused on kind-hearted class cutie Kosaki Onodera, Raku is living a pretty typical life - at least, until a blonde bombshell in a hurry lands a knee square to his face.

As if that wasn't ignominious enough for Raku the girl in question, Chitoge Kirisaki, is a new transfer student, and the pair get on like a house on fire... by which I mean their relationship seems to be little more than a pile of smoking rubble within minutes. Although the two of them can't stand the sight of one another, they're forced together by the fact that their "first contact" has resulted in the loss of Ichijou's pendant, and out of guilt and obligation Kirisaki helps him to look, and eventually find, the item in question. If this is the breaking point of the two's ability to stand one another, thinks are about to get far, far worse for all concerned...

If you want to take a cynical view on Nisekoi, it's a simple exercise in box ticking. From its characters through to its main premise and the circumstances that result from it, everything that this series does is something that you'll have seen numerous times before - originality most certainly isn't Nisekoi's strong point. Yet, somehow, the series as a whole slots together to become more than the sum of its parts - Raku's escalating problems as they pertain to his situation, and particularly as they pertain to Kirisaki and Onodera, is endlessly entertaining to watch and backed up by a supporting cast who all add value of their own to the scenarios that unfold. There may be nothing original here, but what you do find is an extremely polished and considered version of these well-worn conceits - loose ends are tied up with care, and there's a light-hearted energy and pace to the delivery of every episode that makes every instalment enjoyable.

Helping things along is SHAFT's presentation of this adaptation, which is delivered with their usual knack for eye-catching composition and the use of visual devices to carry even dialogue-heavy scenes. Admittedly, their hallmark animation style feels a little overbearing in the first episode - an example of a studio simply trying too hard to make the most out of the source material, perhaps - but once it settles down into its rhythm it does a good job of accentuating the show's outlook and important facets... and yes, that does include the show's mild fan service elements, if nothing else SHAFT knows how to make the most of an episode at the swimming pool!

The show's voice cast also work well in terms of delivering the series - as someone who has previously read the opening volume of the original manga, all of the cast seem to capture their characters well, and coupled with a subtle but occasionally catchy soundtrack the overall presentation of Nisekoi is really top notch and well-suited to its romantic comedy fare.

Normally as a reviewer it's easy to pinpoint why a series succeeds or fails - we can praise its innovation, or frown at its over-reliance on a tired old formula. In Nisekoi's case however, it's a little harder to pin down exactly why it works - there are better romantic comedies out there, and every plot point presented here has been done better before, yet taken as a whole Nisekoi is colourful, entertaining and fun show to watch. Rather than come up with anything original, here is a series that has simply taken old concepts and polished them until they're gleaming and immaculate - and it works. Provided you aren't entirely tired of the conceits used here, Nisekoi is a polished little gem of a show at this point that won't set the world alight, but it will delight you with its comedy, characters and delivery.

8
What it lacks in originality it more than makes up for with its polished delivery - as a result, Nisekoi is greater than the sum of its parts.
LATEST REVIEWS