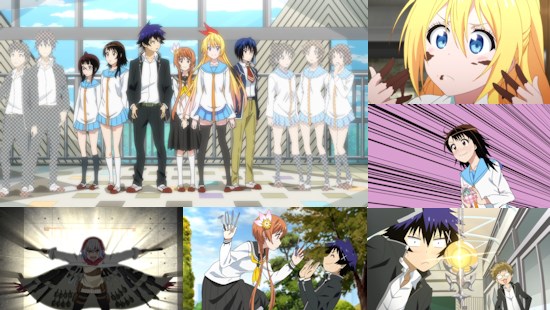 It's been over 18 months since we saw Kazé's first release of popular Shonen Jump anime adaptation Nisekoi land in the UK on home video - now, finally, its second season puts in an appearance from the same source, albeit bizarrely split into two half-season sets yet released on exactly the same day. If you're hoping this will bring closure to the romantic life of Raku Ichijou and the bevy of girls surrounding him however, think again.

After a first season that had no shortage of romantic machinations as the relationship between Raku and the girls in his life shifted, waxed and waned, it's fair to say that Nisekoi at this point has entered a holding pattern of sorts - it's very clear that there will be no winner in this series, and although romance still drives a lot of the cast's behaviour and reactions throughout this series it all rings a little hollow. Chitoge in particular has now clearly fallen for Raku's charms but does nothing about it, while others dally and dither in a way that often feels less like an affirmation of their characters and more like a deliberate attempt to ensure that no girl is favoured or brought to close into Raku's orbit less it hasten the end of the series or upset fans of the rest of the cast. In short, Nisekoi's second season is a truly frustrating one in pure romantic comedy terms, as its rules of engagement prevent even the slightest hint of progress, which is a stark contrast to its first series where characters and events would catch your heart and make it flutter even if it was merely an illusion carefully set up the story.

That isn't to say that nothing of note happens in this second series of course, and indeed Nisekoi boasts a further extended cast by the time the series comes to a close. Tsugumi gets herself a new rival in the form of cute, diminutive hitman (hitwoman? hitperson? hit?) Paula McCoy, we get to meet Chitoge's intense workaholic of a mother, and perhaps most notably Kosaki unveils a little sister she's been hiding away in the basement for the entire first series as Haru Onodera joins the school attended by the others. Indeed, Haru's story is the one that you could argue comes closest to any plot development within the series, as a tough first day sees her setting up an intense rivalry with Raku while also encountering an unknown "prince" who saves her from some thugs who she is intent upon being reunited with. No prizes for guessing who said prince is...

If all of this makes it sound like I'm on a bit of a downer regarding this second season of Nisekoi, then that isn't quite true - yes, the sheen and magical charm of the first series has been dulled considerably (and often feels lost entirely), but the show is still no slouch in terms of its entertainment value. With each episode being split roughly into two stories, every character gets a decent amount of focus with a view towards goofing around with a scenario and mining it for fun comedy, and more often than not it succeeds in getting at least a few smiles out of you as a result. The series is arguably at its best when it ditches and semblance of realism and reaches for its most over-the-top ideas, and by the end of the show we've seen the female cast transformed into magical girls (witness production studio SHAFT in all of their post-Madoka Magica glory here) as the high point of such surreal fare over and above pitched gun battles and giant chocolate statues getting carted around.

When such moments are combined with animation that leans hard into the fun and occasional lunacy on show, you find a series that manages to gloss over its lack of narrative progress with a cheesy grin and big dollops of simple but effective entertainment. Everything about Nisekoi's world is brash and bright, with its animation adeptly switching from making its female cast look as cute as possible one moment before breaking out over-the-top expressions and super-deformed designs the next, clearly revelling in the cartoon world and scenario it exhibits. Visually, the show is a real pleasure to watch in that regard, never feeling constrained and always capable of reaching the heights that it needs to, while still knowing when to reign things in for its occasional poignant moments.

This is accompanied by a voice cast who sound like they're having a lot of fun with their roles - every character gets hammed up a treat in a way befitting of the increasingly over-the-top situations they find themselves in, and the raw energy of the cast in delivering that really helps to sell moments that might otherwise have fallen flat. There's no English dub here as per season one, but Kazé's subtitle work is solid throughout here with nothing more than one or two minor flaws that don't impinge upon your enjoyment of watching the series at all.

The only real frustration in terms of this UK release is its strategy - no doubt the guiding hand of Aniplex is what's led to the show being split into two six-episode sets, but to see them both be released on the same day at a relatively high price point somehow makes the whole affair feel painful from a financial perspective.

As someone who adores Nisekoi's first season as an example of an old-school harem romantic comedy done well, it has to be said that this second season doesn't scratch the same itch - almost all of the momentum of that first series in romantic terms is lost, and the addition of further new characters often feels like it's diluting what was already a perfect formula for success. However, revisiting this second season for a repeat viewing, I have softened in my feelings of disappointment towards this series - yes, it enters a romantic holding pattern that belies everything that has gone before, but it does still know how to have fun with its characters and premise and isn't afraid to dig deep into its crazier elements to that end. Perhaps it would be fairer to say that this is Nisekoi simply taking a different tack rather than becoming a worse show?

Regardless, even if this isn't quite the path I wanted Nisekoi to take it does make for an entertaining second season that you can't help but warm to, and if you love its cast of characters this is a great way to spend some more time with them (as well as some new additions) if nothing else. Provided the cost of purchasing the show over two relatively expensive half-season sets doesn't put you off, there's a fun time to be had here.

Japanese stereo audio with English and French subtitles. Extras consist of text-free opening and ending credits. Both sets also retail with a selection of art cards.

7
The magic of its first season may be gone but Nisekoi's second series still has a lot of larger than life fun and entertainment to offer.
LATEST REVIEWS