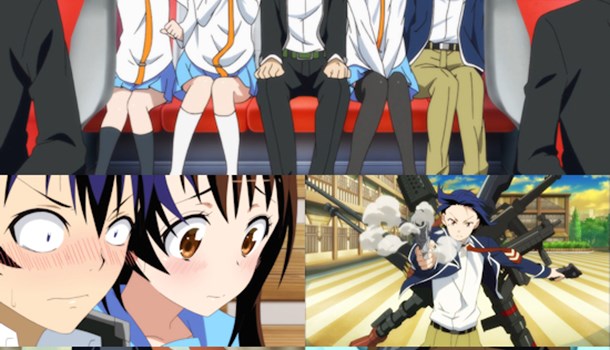 Falling in love is hard to do... however, falling flat on your face after being kneed in the head by a madwoman is exceptionally easy. It's this exact scenario that tips off young Raku Ichijou that he's about to have a bad day, especially given that this encounter causes him to lose the pendant he's been holding dear to him for ten years as a memento of a promise made with an unknown girl; little does he know that his nightmare has only just begun.

The harem romantic comedy genre has enjoyed a long and fruitful existence within anime - personally, I remember delighting at Love Hina back in the formative years of my fandom (which, I'm told, I should be deeply ashamed of now), and to be honest I can't think of any similar series that has quite rekindled the joy and entertainment which that show provided since. At least, not until now... Nisekoi might not thank for me for its Love Hina comparisons, but in terms of providing light-hearted, silly but enjoyable fun it seems like a match made in heaven to my mind.

In Nisekoi's case, the show's main hook is its titular "False Love", which sees Raku forced to pretend to be the girlfriend of the young lady who dealt him that fateful blow we mentioned in our opening paragraph. Having transferred into Ichijou's school and class after moving to Japan from the US, Chitoge Kirisaki stands out effortlessly even without her new classmates knowing that she is, in fact, the daughter of a gang leader. Given that her father's decision to move to new turf is about to start an all-out war with the local yakuza, something needs to be done to refuse the situation - which is where the son of said yakuza boss Raku comes in. After all, nobody will want to upset the applecart and destroy this budding romance, right?

Thus, the scene is set for this chalk and cheese pair to spend inordinate amounts of time together, with Raku all the while sneaking glances at his true first love, the kind yet shy Kosaki Onodera. By the time we reach this half-way point of the season there's yet another fragile heart to add to the equation, as tomboy gangster gunslinger Seishirou Tsugumi joins the harem party, all of which combines to create untold grief from our protagonist.

Here's the thing about Nisekoi - it's incredibly predictable. Romantic moments inevitable grind to a halt due to outside circumstances, Raku frequently gets caught in compromising situations with one of the girls, and the identity of the mysterious girl who he made a promise with shifts hither and thither as it turns out that it could be any of the young women currently within his circle of influence. If you've ever seen another harem comedy, you'll recognise every single situation or story beat that Nisekoi can throw at you.

Yet in spite of this, it really doesn't matter - Nisekoi has boundless energy and a hugely lovable roster of characters that ensures that the viewer remains invested in events, and all of its scenarios and interactions are so tightly scripted that they often transcend the "seen it all before" feeling you should rightfully get from the show because you're having too much fun simply watching it.

This is all helped along by the show's production studio SHAFT, who understand that they need to elevate elements of the series and thus do their darndest to make its crazy moments crazier, its biggest reaction shots filled with the most amazing of gurning faces, and its backdrops ludicrously grandiose on occasion. Admittedly, on occasion they over-egg this pudding and threaten to detract from what's actually going on with the characters, but for the most part they know when to expand upon a joke with additional visual language, or when to turn teasing glimpses of the cast into outright eroticism. Nisekoi is a good-looking show, and its efforts do more than just provide for some eye candy and pretty screenshots - throw in a strong, energetic voice cast to boot and the effort that has gone into the production as a whole its tangible.

With all of that said and done, let's talk about Kazé's release of this first set of episodes on Blu-ray, shall we? Given the company's reputation when it comes to UK releases, many have braced themselves for a problem-riddled release, but the news on this occasion is good. Mostly. Unfortunately - and particularly so for a subtitle-only release - episodes two and four have a very noticeable subtitle timing issue, where short utterances see their subtitles flash on and off screen in just a few frames, while the generally poor choice of timings means that lines of dialogue show up on-screen too soon, and then vacate the screen even sooner before the character has finished speaking their line. This isn't enough to ruin the enjoyment of these episodes, but it is both an irritation and forces some speed-reading so as not to miss what is being spoken.

Outside of these two isolated episodes, the rest of the disc is absolutely fine - subtitles are well-timed and presented with only one or two spelling or grammatical errors that we could pick out, video quality is very good in spite of ten episodes being crammed onto a single disc, and audio quality is similarly without issue. Song subtitles are missing, as is the norm with Kazé releases, but overall the viewing experience is unhindered if only we could discount those two episodes with iffy timing. But life is full of "if only"s.

To round off, the packaging for this Blu-ray release is rather pleasing, with a slip cover to allow for the provision of more pieces of artwork from the original Japanese releases, as well as the bundling in of six art cards comprising of end cards provided by various guest artists for the TV broadcast of the series. In other words, we're getting much of what Aniplex USA's North American release offers at half the price, which is something we can certainly get behind.

Having talked about Nisekoi so much over the past year or so to... well, anyone who would listen really... it's hard to find anything else to say. If you're not a fan of harem comedies then this isn't the series to make you look at the concept with fresh eyes, but if you do enjoy the genre then this is the premise at its peak - funny, silly, occasionally a little touching, and capable of causing all kinds of heated pub arguments over who "the best girl" is. (A hint for those who don't know but want to make conversation: Everyone secretly knows it's actually Ruri Miyamoto, but just say Chitoge as that's the commonly accepted truth amongst those with taste)

In other words then, Nisekoi is fun - that's all it is, and all it needs to be; not every series has to descend into high drama, and sometimes a dose of simple, colourful entertainment is exactly what you need. It's this kind of entertainment that Nisekoi delivers in spades and in a visually arresting way to boot, and even some subtitling mishaps can't get in the way of that.

French and Japanese audio with English and French subtitles. Extras consist of text-free opening and ending credits, while the disc is packaged with a slip cover and a set of six art cards.

8
You've seen this kind of harem romantic comedy a thousand times before, but you've never seen it done with the easy confidence and eye-catching presentation of Nisekoi.
LATEST REVIEWS