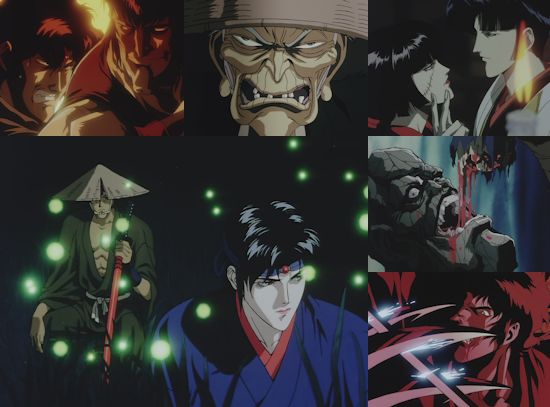 Although it wouldn't really be correct to call Ninja Scroll a classic in its own right - it's no Akira or Spirited Away, let's be honest - it is nonetheless a movie which has a firm place in the heart of an entire generation of fans as one of the gateway drugs which attracted them to the medium in the first place amidst a riot of blood, sex and insane violence.

For anyone not familiar with the premise of Ninja Scroll (you heathens!) it's really simple enough - Jubei Kibagami is a wandering lone ninja who finds himself drawn to the attention of the Eight Devils of Kimon, a fearsome bunch working for the Shogun of the Dark and, perhaps more importantly, a man named Genma whose name reverberates uncomfortably with Jubei.  After rescuing a female ninja named Kagero from the perverse clutches of one of the "Devils", the others seek vengeance against him, while on the other side of the fence a shogunate spy offers our protagonist a princely sum to dispose of them and little opportunity to say "no" to his offer.

Thus, the scene is set for an action-packed and blood-soaked romp as Jubei and Kagero take on the remaining Devils of Kimon face-to-face (one wonders why they didn't all attack at once - I guess ninjas are the chivalrous type) with a view towards a final showdown with Genma, a man who by rights should be well and truly dead and buried from a previous encounter with Jubei.  With each ninja packing their own decidedly distinctive technique, it's going to take all of their skills and wit to ensure that they survive the various forces thrown in their general direction.

The upshot of all this is a relentless and well-paced torrent of action which is of an ilk that you simply don't see all that often in anime any more - its blood flows like a river, and its sex is as brash and in your face as it gets.  Admittedly, this obsession with boobs and sex and dismembered limbs can feel a little immature looking at it now, leaving it reliant upon your misty-eyed teenage reminiscences to help it along at points where you might otherwise roll your eyes at it, but thankfully there are still other reasons to enjoy and indulge in the film in its own right.

Head and shoulders above any other aspect of Ninja Scroll are its visuals, and the movie delights in bringing a cornucopia of fantastically animated and detailed scenarios to life - the sheer variety on show here is jaw-dropping, from night-time skirmishes in the treetops to showdowns at sunset, and within blazing ships and tree-lined forests, all realised with superb attention to detail and simply stunning use of colour.  Luckily, it's also this area which really shines on this remastered Blu-Ray release of the film, which features a crisp, clear, colourful and pristine transfer that quite frankly gives the movie a whole new lease of life, and by far surpasses any previous UK releases in terms of picture quality by a country mile.  We've already mentioned that they don't make much anime like this any more, and that extends to its animation quality as well as its premise.

Ninja Scroll also sounds excellent within this new release - both Japanese and English dubs are spot-on and enjoyable in their own right, and no matter how cheesy some of the English language dialogue it still fits snugly within the larger than life world depicted within the film and is enjoyable regardless of your preferred lingual poison.  Also included on the disc is a commentary provided by the film's director and creator Yoshiaki Kawajiri, which adds another layer to an already eminently worthwhile package, particularly if you're looking to pick up the Steelbook version of the release with its additional booklet penned by Jonathan Clements.

In a nutshell then, if you hold any kind of flame in your heart for Ninja Scroll then this new remastered release of the film is an absolute, inarguable must buy.  If, on the other hand, you're still yet to see this seminal part of history from the perspective of western anime fandom, then the Blu-Ray release served up here by Manga Entertainment is still something that you really should consider picking up and watching - sure, its insistence upon serving up only the most gratuitous lashings of sex and violence ensure that it's hardly going to be the most cerebral thing you'll ever watch, but dig beneath that vapid surface and you'll find a labour of love teeming with top-quality animation and a stunning example of what cel-based animation can do at its peak.

English and Japanese audio with English subtitles.  Extras on this release consist of trailers, TV spots and a commentary featuring Ninja Scroll's director and creator Yoshiaki Kawajiri.  The Steelbook release of the film also contains an exclusive booklet penned by Jonathan Clements.

9
A visual feast given a new lease of life thanks to this glorious remaster of a film that launched so many people headlong into anime fandom. Worth watching for the visuals alone.
COMMENT AND DISCUSS
blog comments powered by Disqus