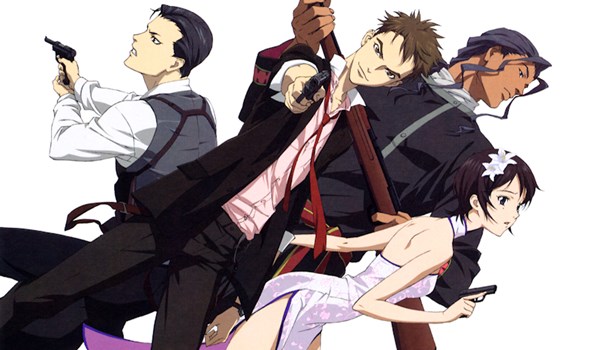 Stop me if you’ve heard this one before – a telepath, a telekinetic and a teleporter walk into a bar.... all jokes aside, it’s time to take a trip back to the 1930s in MVM Entertainment’s latest offering for a slice of super-powered espionage amidst one of the more daring settings that I’ve seen in recent years.

That setting is China (in 1931, somewhat obviously) in the period of the Japanese occupation of Manchuria and just prior to the second Sino-Japanese war (and indeed the Second World War). Given the long-strained relationships in the region partially due to this period in history, it’s certainly a risky move to set your series here! The aforementioned events are all ongoing throughout the series and our heroes are Japanese agents working to uncover various schemes which may destabilise the region, while also stopping a rogue element of the imperial army led by Isao Takachiho who seeks to end the Western colonisation of Asia. The team consists of Isao’s younger sister Yukina who is a telepath, strait-laced teleporter Kazuha, Aoi the reckless telekinetic and Yukina’s manservant Natsume who has x-ray vision. With all these elements in place it’s time for a brilliant X-Men meets James Bond adventure!

Or at least it would be if the series were any good. Sadly though, all of the potential inherent in the set-up is almost utterly under-used.  To begin with, the characters development is appalling with the series choosing to simply throw out random pieces of information whenever it suits it to allow an artificial moment of drama. After a couple of episodes we’re told that some of our characters have limits to their powers, but what are these limits? Your guess is as good as mine as the series is consistently vague and unwilling to explain its rules. We’re told, for example, that Natsume can’t use his powers on the night of the new moon. However this apparently has the addendum – ‘unless it’s convenient for the story’ as some episodes he has no powers and others they just don’t work as well. Random flashbacks are thrown at us presumably in some attempt to set up future revelations and draw sympathy, but there’s rarely any attempt to explain these or put them in any kind of context. We don’t really even get any kind of decent build-up of relationships between the characters themselves. Aoi and Kazuha are supposed to be in one of those ‘pretend we don’t like each other’ friendships but apart from a woefully misjudged stand-alone episode we never see any sense of this in the series, and aren’t ever told why they feel this way even though we see them meet in the first episode!

The show's plot suffers equally badly. The intention is clearly to be a thoughtful political action-drama, but everything just falls utterly flat and instead the series ends up with a bunch of over-long exposition scenes that clumsily keep referencing the Second World War and the development of a nuclear bomb.  The end result is utterly boring, with even the action sequences failing to bring anything interesting to the proceedings thanks to clumsy direction and the largely uninteresting or non-existent visualisations of the team’s powers. It has to be said that things do pick up a little in the second half as the series scrambles to try and pull together a coherent ending out of as many clichés as it can think of, but this is much too little too late and it fails to address the core character issues inherent within the narrative.

What is done well in the series, it has to be said, is done very well though. The period design work is exceptionally good with lots of great details here and there and whilst the series story utterly fails to bring any of the history across in an interesting manner it’s clearly been thoroughly researched and shows a lot of attention to detail. Also of note is the variety of languages on display, with almost every member of the Japanese cast speaking across three languages at various points of the series as large chunks of dialogue are actually spoken in English and Chinese throughout. These are both impressive and you can only wish that the series could have used these to better effect.

Honestly it’s been a long time since I’ve seen a series so poorly put together (and not in a fun, laughable way either) and I'd be hard pressed to recommend the series to anyone. It strikes me that if this had been designed as a film or a mini-series a lot of the issues would have been less noticeable, and there's certainly enough promise in the premise that something truly great could have been crafted here.  Sadly, we’re left instead with one of the worst series to hit the UK in a quite a long time. Avoid with extreme prejudice!

English and Japanese stereo audio with English subtitles.  This collection includes three OVAs interspersed within the series and another recap episode in the extras, together with clean opening and ending credits.

2
For an interesting and insightful view on this period in history.... go read Wikipedia.