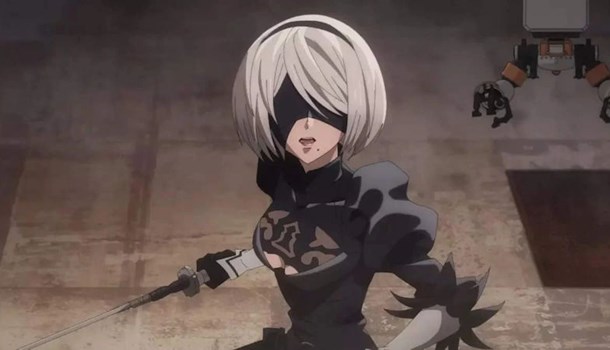 Improving on what a lot of people call a perfect game seems an impossible task. Imagine if someone said, ‘I can take God of War, or Read Dead Redemption 2, and I can make it even better’. They’d get laughed out of the room or escorted down a public walkway with someone ringing a bell behind them and shouting ‘Shame!’ But, somehow, NieR: Automata Ver 1.1A does it.

The shows centres on 2B and 9S, two androids designed by the YORHA group to fight and regain control of Earth, which has been taken over by a hive-like robot force. While the concept may sound simple, the characters and the themes the show explores are anything but.

There are two key components of the NieR series, the plot/action, and the existentialism. The show takes both elements and adapts them to the tv format perfectly. Both protagonists have slightly opposing views to their own purpose and meaning in life. 2B, a battle model android, is focused on winning the war ahead of them and following her orders like a good soldier. However, 9S, the scanner model android, finds himself distracted and entranced in the behaviours of the enemy, who’s hive-like mind is slowly beginning to decompose, as the red-eyed robots begin to find individuality.

The animation by A-1 Pictures (Sword Art Online and Erased) blends a fresh 2D style with character design and textures ripped straight from the game. The show’s soundtrack has been done in a similar vain. The signature vocal harmonies perfectly reflect and enhance the on-screen action. During fight scenes they are intense and accompanied by beating drums and loud bass, but in the calming aesthetic of the post-apocalyptic city ruins, they are light, melodious, and relaxing.

One amazing thing that the series does is show the action and conflict in ways that reflect each character’s purpose and psyche. 2B’s fight scenes are full of action spectacle. She pilots a sword wielding flight suit and takes a ‘brute force’ approach to dealing with her problems. Whereas 2B’s scanning and hacking capabilities are perfectly reflective of his desire to understand and learn about his opponents, not just to inform tactics and combative decisions, but because he sympathises with them.

The first episode ‘or not to [B]e’ introduces us to the two protagonists demonstrating exactly what they were designed for, lethal and efficient combat. The episode primarily revolves around 2B’s battle against a ‘Goliath Class’ enemy, a giant mecha with industrial mining saws for arms. The idea of individualism amongst the collective robotic enemy is also introduced as a small robot is seen collecting oil in a bucket and pouring it other his destroyed ally in the hopes of bringing him back to ‘life’.

As any good second episode should, episode 2 ‘city e[S]cape’ builds on the world introduced in the first episode and begins to explore 2B and 9S’ respective roles in that world. We are introduced to a band of human survivors, who find themselves attacked on a supply run in the city ruins. We also see clips of other YORHA units across the globe in various landscapes and climates, helping to signal the true destructive scale of the robotic ‘enemy’.

As the video game often would, part of the second episode takes a slight diversion from the protagonists and focuses on a larger yellow-eyed (a marker of individuality) robot, only named ‘Big Brother’ who discovers a plant. Almost as if it’s a short film in itself, the audience follows the robot as he plants seeds of his own and helps them to grow. Helped by three smaller robots, the scene culminates in an apocalyptic meadow of dandelions and grass. Without spoiling it too much, the short detour later ties into the main plot and conveys the surface level consequences of mindless war and violence, a theme that will be given far more depth and exploration as the series continues.

Finally, both episodes so far, and most likely every subsequent episode, has ended with a small end credits scene involving marionette puppet versions of 2B and 9S (another reference to their roles as order following soldiers). As those who have played the game will know, there were a total of 26 different endings, each given a different letter in the alphabet. Endings [A] through [E] were part of the main plot, and [F] to [Z] were trivial, inconsequential endings and game over screens. Each end credit scene showed us one of the less consequential endings in a light-hearted manor.

10
A (so far) perfect adaptation with a very promising horizon filled with action, philosophy and many, many questions.

Archie is a freelance writer from South London. He spends most of his free time (and his work hours) watching and writing about cowboys in space and hip-hop samurai. His parents are very proud of him. You can learn more at archiefenn.com