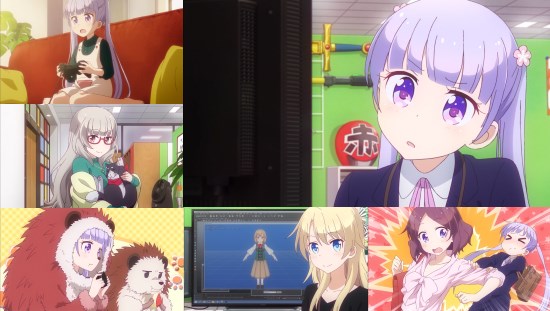 Fresh out of school and with a passion for video games and (more specifically) character design, Aoba Suzukaze has somehow managed to land herself what looks to be a dream job working in the design department of a video game developer. As exciting as dream jobs can be, they also pose the potential to be a stressful rollercoaster ride, especially for a newcomer to the workplace such as Aoba - is this dream going to turn into a nightmare?

Well, as of this point in New Game, absolutely not. Although it would be easy to lump this series in with Shirobako and Seiyu's Life as series purporting to follow and analyse a creative career path, thus far there have been no real hardships in Aoba's working life. Heck, as a female developer she hasn't even received any online harrassment or death threats yet...

In fact, perhaps one of the biggest points of enjoyment for the viewer is the idealised workplace she gets to inhabit - not only is she working under a character designer who she idolises (and whose work inspired her to walk this career path), but she gets to work in a beautiful office full of friendly and helpful girls right through to a director who brings her cat into the office every day to walk around. Whether it's afternoon tea parties in the office or being told that "taking a break is part of your work too", this idyllic work environment is the perfect response to a hard day's toil in a faceless cubicle. There's something genuinely soothing about this take on working life, where your co-workers are your friends and your boss is also an earnest mentor who wants nothing more than to see you improve and realise your potential, and although New Game can't be classed as a "healing" anime of the likes of Flying Witch or ARIA there is something of that genre of anime to this offering.

Then again, this isn't a show where nothing happens; nor is it one that completely throws the question of career development under the bus. Although it perhaps isn't New Game's biggest focus, we do see Aoba struggling to get to grips with her work, especially when tasked with designing some NPCs. This makes for a satisfying episode that see her learn some important lessons about the creative process, moving from creating characters that are technically sound but lacking a certain something through to living, breathing parts of the world they inhabit rather than meaningless background clutter. Moments like this are also punctuated by conversations between Aoba and an old friend over the phone at the end of each episode - much like Hidamari Sketch's bath scenes which close out almost every episode, this offers an opportunity for reflection or realisation on Aoba's part regarding what she has achieved and why, adding a sense of satisfaction to the overall enjoyment to be gleaned from the series.

The show also has some decent comedy chops - it doesn't hit the heights of Shirobako (while we're making comparisons), but the cast bounce off one another effortless and watching them interact can be both fun and funny depending on the situation at hand. There are some moments of fan service sprinkled in here to boot, but even this becomes a running gag as much as a cheap attempt at titilation that manages to remain amusing even several episodes into the show.

Much like its wider charms, New Game is also a hugely pleasant series to look at - its character designs add an extra layer to its likeable cast, and the colourful and lively world and workplace they live in only adds to the cheerful aura. At no point does the show's animation break out and do anything spectacular or out of the ordinary, but then again it doesn't need to, and the framing of shots and use of devices such as on-screen instant messaging windows when characters communicate in this manner (as office workers now often do) all add to a very effective presentation indeed. Add in solid voice performance that fit the cast like a glove, and we're struggling to find anything to fault here.

Much like Flying Witch last season, New Game has quickly captured a place in our hearts as a hugely enjoyable series - its escapism, pure and simple, only with a copy of Maya and a cubicle rather than broomsticks and magic. This isn't a workplace like any of you'll ever have experienced (or if you have, please let me know where to send my CV), but that's exactly what makes it such a joy - if you can't enjoy your own job, then you can at least find vicarious pleasure in Aoba's adventures in video game development, and from the episodes we've seen thus far there is plenty of enjoyment and satisfaction to be found in equal measure. If there's one series almost guaranteed to put a smile on your face this summer, New Game is it.

You can currently watch New Game in streaming form on Crunchyroll.

8
Colorful, cute, soothing and immensely enjoyable - New Game allows you to dream of the workplace we all wished we were employed at.
LATEST REVIEWS