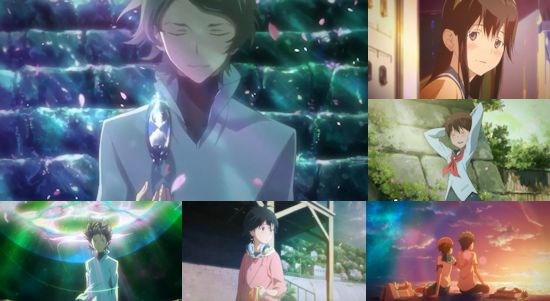 Of everything in this year's Scotland Loves Anime line-up, it is perhaps Nerawareta Gakuen that generated the most excitement for many of those attending - as a world premiere several weeks before it debuts in Japan, and with the production only finishing less than a week before a final tape was shipped to Edinburgh for the screening, there was a palpable excitement as to the unique opportunity being amongst the first to view this film could prove to be.

Based on Taku Mayumura's much-loved Japanese science fiction novel aimed at a younger audience and produced by Sunrise, the film begins with a sign of foreboding well-known to any anime fan - the arrival of a mysterious transfer student.  In this instance, it's established straight away that the student in question, Ryoichi Kyogoku, is anything but normal... indeed, it's clear from the outset that he's entirely other-worldy after a chance meeting with soon to be classmate and protagonist Kenji before the opening day of a new school year.

As for Kenji himself, he seems like your typical school kid - not the brightest, clumsy and well-meaning, and constantly suffering at the hands of his energetic childhood friend and long-standing neighbour Natsuki who gleefully teases him mercilessly and pokes fun at him whenever possible.  As the school year begins, we quickly see relationships and love interests begin to pan out - Kenji holds a torch for student council representative Kahori, while Natsuki's true feelings are plain to see, while Kahori herself has taken rather a shine to newcomer Kyogoku.  While these relations wax and wane, debates break out surrounding the banning of mobile phones in the school's classrooms after an unexplained incident the previous year - an incident that ultimately leads the girl who suffered at its hands to attempt to take desperate measures, which in turn makes her a prime target for Kyogoku's plans...

From these seemingly innocuous beginnings, more and more begins to change around the school, as students begin to either stop showing up to classes or appear to have completely changed their personalities - with Natsuki absent, it seems as if only Kenji and Kahori aren't directly affected... but exactly what is going on?  With romance still swirling in the background, it's ultimately up to our main trio of characters to find out and put a stop to things, in a world where the use of psychic powers and time travel amongst other things threaten to overrun everything that they currently cherish in their lives.

If all of that sounds like the basis for a compelling and coherent story that shares some minor similarities with The Girl Who Leapt Through Time.... think again.  Despite the potential of its premise, Nerawareta Gakuen is a complete and utter narrative mess to the point where a large chunk of the film simply doesn't make sense.  Remember that bit I mentioned about mobile phones being banned from the school?  This is referenced, discussed and focused upon umpteen times during the movie, yet at no point is the reason for the ban or the incident that caused it explained - if it's superfluous to the plot, why spend so much time on it?!  Incredibly, this is actually one of the more minor issues with the film's story-telling, as it incessantly throws out new and incredibly important chunks of information with an "oh, by the way" kind of lackadaisical approach that eschews any kind of exposition, explanation or definition.  Come the film's final act, many of the major twists and revelations fail to make any kind of coherent sense to the viewer whatsoever, leaving it to feel like the anime movie equivalent of a "relay novel" that had a different writer working on each page of the script with little knowledge of what has gone before.  Perhaps there is information missing here that is reliant on prior knowledge of the original novel, but that doesn't excuse shoddy story-telling or plot development, and if you're looking for a coherent narrative or any kind of sense of threat or tension from that narrative then avoid this film because it's absolutely terrible in that regard.

Thankfully, we do have at least some positive things to say about the film - when it's playing its hand in the name of comedy it proves to be surprisingly competent and even serves up at least a couple of outright hilarious scenes that could find a home in any romantic comedy.  Indeed, it's the romance angle of the film that works best - Natsuki's pain and struggles in making her feelings reach Kenji are touching and occasionally heart-rending, and while Kahori's story is far less interesting romantically it has a certain amount of impact to it to boot when it isn't lost in the incoherent mire of the film's broader story.

The one area where Nerawareta Gakuen absolutely excels is in its visuals - although it occasionally over-eggs its aesthetic pudding with scenes that are too busy (filling the frame with blossom or soap bubbles, for example), the overall look of the film is sumptuous and has obviously had a lot of time and care invested in it.  The backdrops and settings for the movie are stunning and almost Shinkai-esque, the character designers are appealing yet striking, and the animation of character movement is expressive from beginning to end to add an extra dimension to whatever is happening on-screen.

Pretty visuals, a great voice acting cast and the presence of Supercell on the soundtrack doesn't the fact that, when push comes to shove, Nerawareta Gakuen is a really bad movie.  It almost feels as if there was no direction applied to the show's story at all, which leaves it lurching this way and that in terms of both plot and tone, gluing together disparate elements in a hopeful and scattershot fashion like a wannabe DIY expert building some flat-pack furniture without reading the manual.

If you're happy just to gawp at the looks of this movie and laugh at the funny bits (of which there are a fair number), then Nerawareta Gakuen will satisfy you to some degree.  However, if (as is more likely) you're looking for a story that makes sense and compelling science-fiction elements out of this film, then avoid it at all costs as it's pretty much a perfect example of narrative gone horribly, horribly wrong.