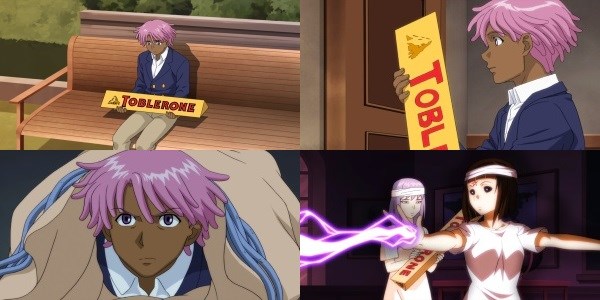 There comes a time in all of our lives when a piece of media appears that makes us question our perception of reality. If someone were to tell you that Production I.G and Studio Deen partnered with the front man of Vampire Weekend to make an original Netflix anime series, and that they would cast Jaden Smith as the protagonist, you'd think they were lying to you. Alas, we are about to discover that this is in-fact not a dream but the horrifying reality of Neo Yokio.

Neo Yokio takes place in a futuristic city, where the aristocracy consists of two main elements: Those who came from old money, and those from a class of society who can use magic to exorcise demons, they are known as “Magistocrats”.

The story revolves around Kaz Kaan, a young Magistocrat and Neo Yokio's 2nd most eligible bachelor. The latter is a fact made abundantly clear by a giant leader board, which hangs in the centre of the city. Having recently broken up with his girlfriend, Kaz finds himself at a loss. Going through an existential crisis that not even shopping - for his favourite designer brands - can fix. Nor can the reassurance of his mecha best friend, Charles, snap him out of it. Unfortunately for Kaz, the family matriarch - his Aunt Agatha - reminds him of his obligations to society: Performing odd jobs for the wealthy, such as exorcisms and security detail at fancy parties. Whilst being a member of the city's high society, Kaz and his family need to maintain their status by performing these jobs, most of which seem to interfere with Kaz's social activities. Thus we see Kaz try to strike a balance between his family obligations and his social obligations in Neo Yokio.

I should make this absolutely clear at this point: Neo Yokio is not a good show. However, it is an entertaining one. If you've seen the trailer, or screen shots, floating around the Internet you may well write Neo Yokio off prematurely. Even though you probably should, you need to watch this show regardless. Though the reasons to watch Neo Yokio may well also be perceived as reasons not to watch it. The phrase “so bad it's good” gets thrown around often these days and, perhaps save for things like “The Room”, it seems like a tag assigned to anything people struggle to describe any other way. Here, Neo Yokio fully deserves this label. The series does so many things poorly that it somehow elevates itself to a whole new level of ironic enjoyment, that is just indescribable.

The animation and sound design is, in a word, terrible. The animation is so flat, with such lifeless looking characters, that you may think you have somehow traveled back in time by a decade or so, and arrived knee deep in the low budget Fox Kids shows of the time. Most characters hardly move, and when they do it becomes clear how bad the animation really is. Given the synopsis, and the fact that the protagonist is an exorcist and magic user, you may think that there would be some decent action scenes at least. Nope! Unfortunately, the few action scenes that do take place are very limited in both of scale and screen time. Kaz’s powers (at least those on display) seem limited to firing energy balls from his hands, which do very little damage against the demons he fights. He keeps using these same attacks, hoping they will hit, until one shot gets lucky and he wins. Perhaps lacklustre action scenes could be forgiven, if the soundtrack were decent. However, the soundtrack in this show is a weird assortment of classical music, often set to scenes which really don't fit the tone of the piece being played. This makes for a very odd contrast, that will make viewers scratch their head at what response it is trying to elicit from the viewer.

With regards to audio, the main thing we need to talk about is the vocal talent: Boasting a rather impressive cast consisting of Richard Ayoade, Stephen Fry, and Jude Law - to name but a few. With a big name mainstream cast you might expect stellar performances. While that is not the case, it really is hilarious to hear how bored everyone appears to be, and how phoned in their performances are. This is particularly evident in Stephen Fry's constant sighing, as he shouts out expletives as the principal character in one episode. Similarly Jude Law sounds like he only saw the script a few seconds before recording, and is reading it straight into the microphone. There are also some odd moments, where we have a group of people laughing and it sounds like they just turned a microphone on in a room full of people and told them to laugh. Though special mention needs to be given to Jaden Smith: He manages a whole new level of terrible. His opening lines of dialogue had me rather confused about how the character is meant to be feeling at that moment. Was he meant to sound sad? Angry? Depressed? Frustrated? Bored? I have no idea! Whilst these performances are bad, the voice cast did have a difficult and, frankly, bizarre script to work with. Lines of dialogue such as: “Kiss her you magical bastard” and “win, lose, we're all equal in the grave.” are hard to take take seriously.

Speaking of characters: The biggest problem with the show is Kaz himself. The main character, who immediately sets himself up as a very selfish and unlikeable character. One who only does things out of obligation and boredom rather than any sense of fulfilment or ambition. Most of the time he talks about clothes, making him seem vain and conceited. He honestly has no redeeming qualities whatsoever, there is even one episode where he acts in a completely transphobic manner - he doesn't even realise what he did wrong, nor does he apologise properly for it.

The only saving grace for Kaz is his love of Toblerone, his way of apologising is by giving people a “big Toblerone” - this in itself becomes a running gag. Each episode has some mention of this fabled chocolate, so much so that it feels like the show must have been sponsored by Toblerone. That said, there are times when the show tries to attempt a moral message or handle a delicate theme. However, Neo Yokio habitually brushes them off before it can give its stance on any situation. It feels like it dips its toes in the water just to raise the point and get people talking, but doesn't dare plunge in to offer any kind of deeper meaning or message. In a way it feels like an old early morning cartoon, one that ended each episode by trying to teach its viewers a lesson about morals - The way Neo Yokio appears like its going follow suit, but abruptly drops the issues, just seems funny.

While all these aspects should make the show terrible, it somehow blends together to make the show fun. Though it is admittedly fun in a cringeworthy way. This is a series where the viewer's enjoyment is taken by witnessing how terrible it is. The episode plots are all simple affairs, with very little at stake. The writing is littered with crass dialogue, delivered by actors who simply don't care enough to put in any effort. The animation is flat and inconsistent. The show has a terrible protagonist, who has no redeeming qualities. Yet, I have to recommend people watch it. It is the kind of show you laugh at for being so bad, thinking to yourself “this can't be serious” or “they must have intended to make it this bad”. This gives Neo Yokio a somewhat endearing quality. Yes, there are times where it seems to realise how ridiculous it is and relishes in it. From the odd deliveries of weird lines of dialogue, to the rather overt references to other anime. Its plot and pacing leave something to be desired, but I can't deny that I enjoyed watching it.

This all makes Neo Yokio very difficult to rate. On one hand there are glaringly obvious problems with the series, but on the other hand these somehow work in it's favour. The series somehow transcends badness, to make an interesting show which can be enjoyed if you're willing to look past or embrace the problems as part of it's charm. While it will not be to everyone's tastes, and I have to say that this show is objectively bad, I will not deny that I enjoyed watching it.

You can currently watch Neo Yokio in streaming form on Netflix.

5
A series constituting a range of bad things, that somehow blends them together to make something much greater than its parts.