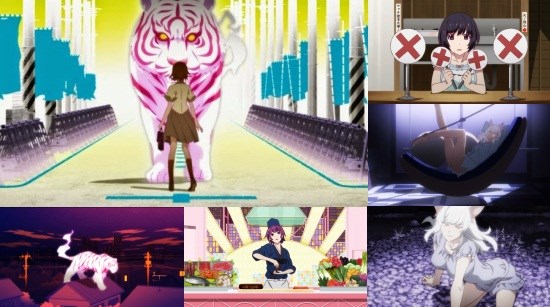 Yes, it’s that most wonderful time of the year again! What? Christmas? No no no, it’s time for the new Monogatari story arc to hit the shelves from MVM Entertainment. This time we’re moving into Monogatari Second Season though, in keeping with the Aniplex of America release format, the set is billed as a standalone arc rather than as the first volume of a series. Last time out Nekomonogatri Black’s prequel story proved a little underwhelming overall, but now we’ll see if the series can shine again with Nekomonogatari White.

As you’ve probably guessed from the title, our focus this time out is once again everyone’s favourite part-time scantily-clad cat girl Tsubasa Hanekawa. Her life’s never really been particularly great, with an uncaring family who don’t even afford her the comfort of her own room and her persistent possession by a cat spirit, but things are going to get worse before there’s any chance of them getting better. In the span of a single day Hanekawa has a run-in with a colossal tiger spirit, her home burns to the ground and her ‘black’ self emerges once again. All this and our man of the hour Araragi is knee-deep in his own problems (which look to be the focus of the next arc from the hints that are dropped) and is unable to help! Yes, you read that correctly – the flipper of skirts and brusher of teeth is absent from proceedings this time around, leaving his "harem" to solve matters of their own. Between Hanekawa, Senjoghara and the almighty Fire Sisters, even a tiger would surely turn tail and run?

Last time in Nekomonogatari Black one of the main issues was the absence of most of the supporting cast which left matters feeling a little lifeless compared to prior instalments, so it’s interesting that White takes almost the opposite approach by choosing instead to remove the series lead character (although poor Nadeko doesn’t get a look-in either). The difference this makes is phenomenal. By shifting the point of view character to Hanekawa, the show allows its characters to develop themselves in a totally new direction without Araragi’s perverted presence. Senjoghara for example loses some of her hard edges and reveals herself to have a much more feminine side to her, showing that she truly cares for her friends (in some very interesting ways too that one rather hopelessly wishes might be examined further in future stories). We also of course get a fascinating glimpse into Hanekawa’s own personality, as much of the arc revolves around both how she sees herself and how she wishes to be seem by others. The end result of all this is by far the most engaging arc of the franchise thus far that leaves you sat almost dreading Araragi’s return to being the viewpoint character.

Beyond this new character perspective, the story itself is excellent and uses a clever structure of chapters (presumably borrowed from the light novel) which are often referred to by Hanekawa who - like most of the cast - is not afraid of breaking the fourth wall now and then. I couldn’t say for certain that it’s a 100% original approach but it feels really fresh and innovative with a smart pay-off. The voice cast are on top form as well here and really seem to relish the chance to explore their characters further, though of course its Yui Horie (trivia – she was also Tohru Honda in Fruits Basket) who stands out the most with the lions (or should that be tiger’s?) share of the work.

The one area where Nekomonogatari White does fall down a little is in the quality of its visuals (I’ll pause for a moment whilst the shock passes). Don’t get me wrong, the series still looks amazing, but a few tell-tale scenes and some poorly integrated CGI show that the budget seems to have taken a bit of a hit behind the scenes, probably due to Second Season being a full length, two-cour series rather than the single cour seasons and OVA we’ve had up to now. Also, on a personal level some of the new character designs are a little disappointing, with both Senjoghara and Hanekawa sporting new haircuts (after Karen doing this in Nisemonogatari I’m beginning to suspect someone of the staff has a bit of a fetish...) since the last time we saw them. Oddly it appears that Tsuhiki has grafted on the fallen locks, as she suddenly has a huge lions mane of hair wrapped around her!

These are incredibly minor niggles however, and to penalise the series for this would be as petty as marking it down for not having as catchy a theme song as the Tsuhiki Pheonix arc - and what show could do that? (DISCO DISCO DISCO - Ed)  The fact of the matter is that Nekomonogatari White is superb, and future arcs are going to have to work hard to live up to this.

10
A jaw-droppingly good return to form.