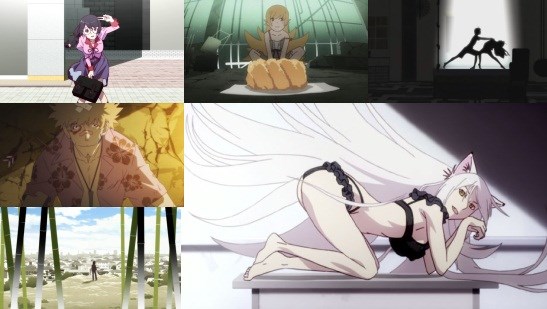 The arrival of a new entry into the Monogatari franchise is always fantastic news as I adore the world and its characters, not to mention the fact that the show'svisuals are so good they make the view out of my window look flat and unappealing in comparison. So, without further ado lets dive back into the trials and tribulations of Araragi, as I hear that someone’s been a bad little kitty....

Our man Araragi has had a bit of an issue over the course of the Monogatari series thus far. He’s been threatened with a mouth full of stationary, chained to a chair and now in his latest (well, earliest.... well, earliest till we get the prequel to this prequel) he’s the recipient of a brutal crowbar attack from his own sister as he tries to have a bit of a lie in. Still, given the events that are about to unfold it’s probably safe to say that this won’t be the worst thing that’s going to happen to him this week! Set directly before the events of Bakemonogatari, Nekomonogatari Black serves as a direct prequel both to that series as a whole and also to its final arc, "Tsubasa Cat".  What we’re getting here, then, is one of the most streamlined sets of characters since the original arc as Araragi has yet to meet the majority of his harem, with only Hanekawa, Shinobu and his sisters appearing bar a couple of cameos in background shots here and there. At this stage in the Monogatari-verse our hero believes he may have fallen in love with the buxom class president, though he readily admits this has more than a little to do with her figure. When she suddenly vanishes to be replaced with a lingerie-clad cat girl, this to some extent only improves matters for our hero, though his concern for the whereabouts of Hanekawa is certainly genuine and becomes a growing concern after his first encounter with said girl results in his arm ending up several feet from the rest of his body (I love it when they play hard to get). Given the issue at hand, it's time to enlist the aid of Oshino and a certain sweet-toothed vampire to try and get things back to normal.

It’s always a blast coming back to the world of the Monogatari series, with its weird and wonderful characters and the insane tangents that its stories and dialogues tend to wander into. You'll certainly get all of that here, with an added dose of half-naked cat girls (rarely a bad thing), and it’s still wrapped up in some of the most sumptuous visuals you’ll ever get to see. But ,to a large extent this is definitely one of the poorest entries into the series, made worse by the fact that this is a separate release rather than being packaged in with either the preceding Nisemonogatari or the forthcoming Monogatari Second Season. (Get used to an arc-based release schedule from hereon in! - Ed)

The big issue here is that, as with a couple of previous story arcs, the editor has been off on holiday again and there’s a huge amount of wasted time here, mostly in the first two episodes. There’s easily twenty-odd minutes that should have been trimmed out here (frankly its only because this is a Monogatari series that it gets away with that much, as most series would tell the same story in at most two episodes and more likely just one). Yes, it is a bit of a trademark of the series that it tends to have long and unimportant conversations between its characters that take some quite odd twists, but here it’s all a bit by the numbers - unless you had chosen to watch the series in chronological order you’ll have seen this done before and done much better in the other arcs. A big part of this is definitely the limitations of the characters they have access to for the story, as Monogatari has always relied on its ever-growing cast to keep things interesting, but here Araragi doesn’t really have anyone to play off. The Fire Sisters are quietly moved off to the side after Tsukihi provides him with her special brand of wake-up call, Hanekawa spends most of the episode absent and Shinobu is mute, leaving only Oshino and a cat girl to interact with, neither of which are really characters that can fill the void left by the absence of the likes of Kanbaru and Senjogahara.

I really love the franchise at this point and I’m fully invested in these characters, but Nekomonogatari Black just doesn’t do anything with its four episodes that allows you to push past the issues mentioned above, and it desperately needed something to make it stand out rather than just being there to tell a story already alluded to in a prior arc. If nothing else, the presence of a cat girl in her underwear could have been used to push some boundaries but the arc is still out-eroticised by a scene of two fully clothed characters and a toothbrush.

I honestly can’t say that there’s anything here you’ll miss out on by not picking this instalment up, and you could well be better served by waiting for Nekomonogatari White (also the first arc of Monogatari Second Season).

Japanese stereo audio with English subtitles. The only extras here are clean opening and closing credits.

6
A lesson in how to make an average Monogatari.