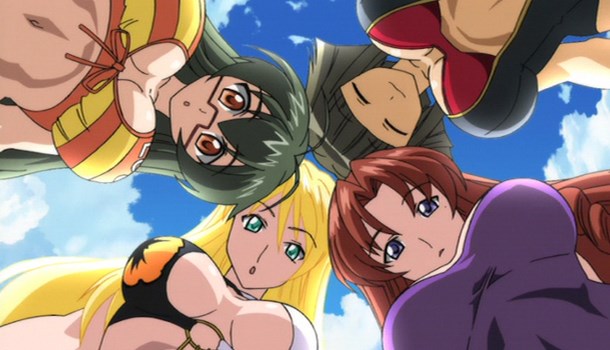 10 year old magician genius Negi returns, along with his class of adorable female misfits, all trying (perversely) to get it on with their diminutive teacher. This OAV covers the Spring and Summer breaks for the class, with visits to an exclusive resort and a spa respectively.

In the first half hour episode, rich girl and head-of-the-class Ayaka organises a romantic getaway, but finds her plans hijacked by the rest of the girls. On top of all that, poor Negi has to contend with a major strop from his room-mate Asuna.

In the second, a spell gone awry sees the shy Nodoka attached to Negi by a red thread, and the two of them have to spend 24 hours in each other's company until the spell wears off.

Anyone who has seen an episode of Negima will know exactly what to expect, which is to say harmless titillation, bright, pastel shaded shots and a little magic to move things along. The first series of Negima failed to really capture the spirit (and complexity) of the manga, so it's good to know that these stand-alone episodes don't really require much knowledge of either before you can settle down and watch them.

That, however, is both a strength and a weakness. Doubtless Negima fans will get the most from this release, but by watering down the plot it's also fairly throwaway stuff. Yes, it has a few decent comic moments, but it's a very light and fluffy 60 minutes - so much so that as I write this, 3 days after having watched it, I had to throw it back on to remind myself what happened in the second episode!

The English language dub is ok, but Negi does sound asthmatic, and for that reason I recommend the Subtitles if you don't mind reading along. It also helps when character profiles flash up onto the screen - they aren't translated for the dub, so it becomes an annoyance very quickly.

There's nothing particularly wrong with the OAV, infact the animation is lovely, it just doesn't leave much of an impression. It could almost be an episode of Love Hina and you'd struggle to notice the difference. If you're a Negima completest, or you just want to while away an hour with some modest entertainment, this could serve you well. For the rest of us, it's harmless fluff that you'll likely watch once and then quickly forget about.

Textless songs, trailers and a commentary by the English vocal cast are the meat of the extras. The commentary track is pretty vacuous, and therefore suits the OAV perfectly.

6
Add a point if you're a Negima!? fan, but this is pretty fluff and little else.