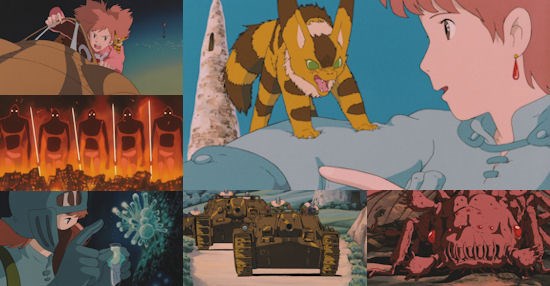 Nausicaa of the Valley of the Wind (Blu-Ray)

I can’t believe it’s been five years since I reviewed this film on DVD when it was first released by Optimum. It was the first time I had watched the movie and absolutely loved it at the time. For a film that is now over 25 years old, it is amazing how well it has stood the test of time. Now, with the Blu-Ray generation here, we see the first of the Studio Ghibli classics hitting the format, but is it worth the upgrade?

For the most part, the review I did back in 2005 of the film stands very true here and now. The film is still a whimsical tale with the lead character of Nausicaä holding all of the emotion it did then. If there is ever an anime film that dares to be called an all-time classic, then this is it. So to know what the film was like, check out the DVD review right here. This is going to be a very technical review for those looking to upgrade to this Blu-Ray release.

So, first things first - this is not just a simple upscale job. This is a real remaster of the source material, and you can see it from the opening frames. Going back to the original source film has done wonders for the transfer to HD and here we have a release that looks both crisp, clean and just wonderful on a HD setup. If you only need one reason to upgrade, then do it for the wonderful picture quality here. Everything is so nice and clean, and even with the darkest black there is not a sign of the compression or artefacting that we are used to seeing on DVD releases.

If there is one thing I am disappointed about is that the film has not had its sound remixed to included 5.1 surround. As such, both the English and Japanese dubs are presented in stereo and still in the LPCM standard, which means that it is of a high quality. For those that are unimpressed by subtitles that use the English dub as reference (commonly known as dubtitles), you will be pleased to know that the English subtitles are separate from the English dub.

A particular note should be made for that English dub as well. It is an incredibly high grade production with some top-notch voice actors including Sir Patrick Stewart, Uma Thurman and Mark Hamill, along with Shia LaBeouf before he had his big-break and Edward James Olmas who most of you will know as Admiral Adama from Battlestar Galactica. The voice actors do a fantastic job and it is very much worth watching the movie in both the Japanese and English dubs.

Extras wise, for those that picked up the DVD edition, all the DVD extras are present and accounted for. These include a half an hour look back at the history of Studio Ghibli as well as storyboards that can be shown using picture-in-picture during the main feature, which is nice for seeing how the film was made. Also included are the original Japanese trailers and a Studio Ghibli trailer reel. As these features were all present on the DVD, they have not been upscaled to HD and remain in DVD resolution and quality.

The Blu-Ray does include some unique extras however, in the form of audio commentary with Hideaki Anno (of Evangelion fame and an animator on the film) and Kazuyoshi Katayama (from Appleseed and The Big O, and an assistant director on this film). This commentary is obviously in Japanese with its own subtitle sets, though there is an issue with the film playing in the Japanese dub. With the English subtitles being used by the audio commentary it makes watching the film with the commentary difficult.  Although if you are listening to the commentary then you have more than likely already seen the film once, but it is a bit of an oversight to not have the English dub playing under the Japanese commentary. It’s not unwatchable, but it would have been better to understand the film while listening to the men behind the film.

The second exclusive feature is an interview with Toshio Suzuki and Hideaki Anno talking about the film. While I was expecting this to be a video interview, this ended up being an audio one with a forty-five minute countdown clock displayed on screen. It is a little strange, but not being a video commentary and needing something on screen to show that it is running I suppose it needed something, though I would have thought stills or something a little more interesting could have been used.

The final new feature is one called “Behind the Microphone”, which is basically a behind the scenes affair with the English voice cast. It is a nice feature and as always it is great to watch some of these A-list actors talk about how much they loved working on the film, and the care and attention used on the English dub from 2005. Again it is DVD quality, but it is a fantastic watch and worth looking into the English side of the film.

What was already a fantastic film with a near-perfect DVD release in 2005 has now had a near-perfect Blu-Ray release in 2010. There are grumbles about the lack of 5.1 sound for either the English or Japanese dubs, but to be honest it doesn’t stop this from being a fantastic release. If you needed reasons for upgrading to the Blu-Ray edition, then to be honest you have it here in spades. It was great in 2005 and five years later it has been made that little bit better.