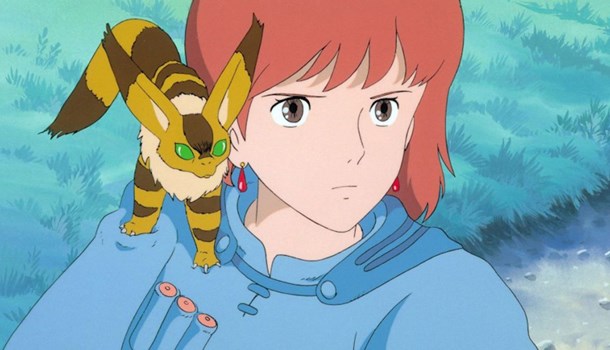 Spirited Away, Howl’s Moving Castle and Grave of the Fireflies, these are some of the most recent Studio Ghibli products, and most people agree that there are some classics among this collection. Awards have been won by the studio and in most cases, especially in Spirited Away, you can see why. But its nice to see the films that brought Studio Ghibli to the lofty heights of success and thanks to Optimum Releasing we get to see Hayao Miyazaki’s first masterpiece, Nausicaä of the Valley of the Wind.

Nausicaä of the Valley of the Wind follows the princess of the Valley of the Wind called Nausicaä. (duh!) Nausicaä lives in a world where a 1,000 years ago a war on the planet has caused a highly toxic forest of plants and insects to spring up across the planet. This toxic forest is slowly taking over the world leaving few pockets of humans. Course, this has made some of the human ‘tribes’ desperately and looking for any possible way to destroy the ‘Sea of Decay’ as it has been called. Nausicaä sees the connection with the earth, the Sea of Decay and the remaining humans. Problem, she needs to convince the rest of the world.

Even for being over 20 years old, Nausicaä has truly survived the test of time. These are the days before computer animation, hell before computers were even powerfully enough to use in anime in any form. The animation is still so fluid, the character designs amazing, the world filled with the creatures, especially the Sea of Decay are just breathtaking. To say that about an animation 20 years after its originally release, Disney are the only ones that could even say they’ve done that.

Its not just the animation that has survived the test of the time, the plot is still as enchanting as ever. Nausicaä brings a heavy anti-pollution message, but does it in away that it isn’t cheese or a rip-off of Captain Planet. It’s a story of survival, that mistakes in the past that aren’t learnt or doomed to be repeated. While the story is a post-apocalyptic world, its not all doom and gloom. That the few pockets of humans that have survived have made a decent world for themselves and understand the world better for it. It’s a breath of fresh air, where most films would just have people warring with each other.

It’s the character of Nausicaä that comes across as the shiny star of the film. She brings so much to the film, it is actually painful to stop watching the film at the end. It feels that she has become such a part of thoughts and feelings, it seems unreal to let that go. Your enjoy the world she inhabits and feel the uneasy feelings she has when dramatic twists and turns in the plot happen…and they will.

The music score is another ingredient of the film that just adds so much character to the film and the world of Nausicaä. While it does feel very 80’s in places, it still charms and still adds so much to the film.

In short, don’t do yourself a disservice by missing out on this film. Yeah, some may find it too kiddy, others may not like heading back 20 years to watch anime, but trust me, you’ll be missing out. This is the first in the Studio Ghibli collection and what a way to start. Nausicaä of the Valley of the Wind is a fun, family film to watch and it will bring a tear to your eye. Watch it now.