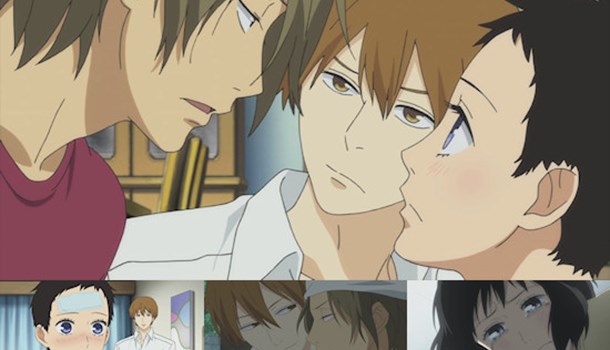 Falling in love at first sight can often be hard, and this is certainly the case for the protagonist of one of this season's two noitaminA programming block offerings, Ryuusuke Hazuki.  When this twenty-something young man falls in love with the manager of a near by flower shop, there's no hiding his feelings, but what to do about it?  With something of a shy disposition, the best Hazuki can do is buy a plant or some flowers from the shop every single day, giving him a few brief moments of happiness as he gets to interact with the apple of his eye, offset by an apartment which is fast filling up with unneeded floral decorations.

When a job vacancy pops up at the flower shop in question, Hazuki quickly spies his chance to spend some more time with the object of his desires - but in getting this job has he simply thrown himself into the midst of yet more torture as he frets about his love proving to be unrequited?  This certainly seems to be the case when an invitation from the woman in question, Rokka, to her house one weekend puts Hazuki face to face with someone who appears to be her boyfriend.  Irritated and despondent, Hazuki walks out to the confusion of Rokka - a confusion which is soon explained by a rather unique set of circumstances.

Although Hazuki wasn't wrong in his assumptions about the man hanging around inside Rokka's home - he is in fact her husband - the couple's circumstances are anything but normal.  To cut a long story short, Rokka's husband is deceased, and the man Hazuki is seeing is little more than a walking, talking ghost; albeit a ghost who is fiercely protective of his wife and quite determined not to allow anyone else to come near her if he can help it.

Incredibly, the emergence of this man, Shimao's, ghost does nothing to deter Hazuki, and he continues to woo Rokka, treading a path that only looks set to become more and more difficult as we witness first-hand both Rokka and Shimao's dedication to one another, tempered by the reality that they can never be together again - indeed, as Hazuki is the only one who can see Shimao he can't even communicate with his wife in the slightest.

It's this very unique love triangle which powers the heart of this josei manga adaptation, albeit via an opening episode which threatens to misfire majorly.  So quickly does the series leap into setting up its premise that it spends little to no time letting us get to know its characters, and as a result we simply don't care about any of its major players - indeed, we almost end up actively disliking them as Hazuki in particular makes a poor first impression upon the viewer.  The show's visuals also struggle to draw you in - it struggles to be expressive emotionally, and you get the feeling they're struggling to portray Shimao's ghostly presence in a suitably compelling way.

By the end of its first episode, I was expecting to be disappointed by the series - only to be completely blown away by its second instalment.  Suddenly, everything clicks into place here to create an emotional tour de force - grasping Shimao's heart-breaking circumstances and Rokka's difficulties as a widow who has never entirely shaken off the loss of her husband makes for an upsetting but hugely powerful viewing experience, and you're left in the same state of confusion as the main characters by the end of it.  Does Rokka's happiness lie in moving on and finding someone new, and is Hazuki the right person for her?  Besides which, what of Shimao?  He might be a ghost, but he clearly still has feelings.

After than sensational episode, things are tempered again somewhat by the show's third instalment, which removes at least a small part of Shimao's helplessness and isolation and in turn "dials down" the state of emotional tension offered by its scenario.  Hopefully this has been done with a greater goal in mind as the series continues, but it does raise concerns that it won't be able to reach the same heights as it continues to mature the relationships within the series.

All of this leaves Natsuyuki Rendezvous as a difficult show to surmise from its opening three episodes - in terms of quality it's a scattershot affair, and its animation style doesn't really match the story that it's trying to tell particularly well.  However, that second episode is one of the most powerful and perfectly realised piece of animated drama I've seen in quite some time, and for that reason I'm unable to leave the series alone - as a demonstration of what a show can do distilled into a single episode, you can't get much better.  If the promise shown by that instalment is followed through, then Natsuyuki Rendezvous could prove to be a slow-burning hit for anyone on the look-out for a suitably dramatic romance series, and perhaps more specifically one that doesn't revolve entirely around high school kids, which is refreshing in itself.  At this point in the series, that certainly remains a big "if", but if its genre and concept catch your eye there's certainly nothing to lose from checking out these first few episodes.

7
Its opening episodes have been hit and miss, but there are periods of dramatic genius housed within this series thus far, suggesting that it's well worth persevering with.
LATEST REVIEWS