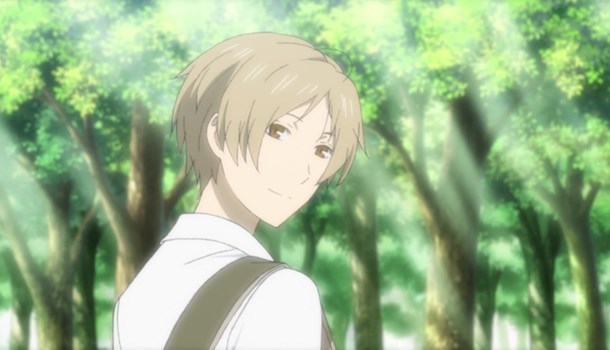 "Season 3? Where are the reviews for seasons one and two?" you may be screaming. Well, they will come in time. But for now, lets look at the show that is being released now, shall we? I'm no stranger to Natsume's Book of Friends (or Natsume Yuujinchou as Crunchyroll insists on calling it - why didn't they fully translate the title?) as I have read a little of the manga that this series springs from.

The show centres on Natsume Takahashi, a very normal high schooler who is blessed/cursed with the ability to see "youkai" - a blanket term covering supernatural creatures in Japanese folklore. Not only that, but he can talk to them, interact with them, and can't ever turn this ability off. This curse of constantly seeing creatures that no-one else can see has led to no end of grief throughout his life, causing him to be labelled a problem child and a weirdo. Now living with a kindly aunt and uncle, Natsume finds out that his late grandmother also possessed the same ability and experienced the same hardships, but she had a rather odd way of dealing it: she beat the youkai up and stole their names, binding them to her service. Natsume finds the "Book of Friends" of the show's title, and becomes a constant target of youkai who desire the book for its power over their kin. Natsume resolves to give the youkai back their names, in the hope of setting them at ease (and to avoid beaten eaten in the process). So is this adaptation any good, and is it approachable when you jump in twenty-six episodes into its run?

To cut to the chase, Natsume Yuujinchou is good. Damn good. Shockingly good. In fact, I'm surprised that I have not heard more people talking about it as it certainly deserves the attention. Thankfully, picking up the show at this point is not a burden - within two minutes of the first episode of the season starting it had very calmly and naturally introduced the main character and setting. The show maintains an almost perfect pace throughout, never feeling rushed or sluggish at any point, and managing to strike a perfect balance. Given the contemplative nature of the majority of the plotlines, it is no mean feat that Natsume avoids the pitfall of dragging things out that claims some other shows of this type. That's not to say the show is without its tense moments, which are perfectly pitched to tug at the heart rather than scare you out of your chair.

The stories presented are very episodic and are elegantly produced to contain a full narrative arc within an episode, avoiding the problems of leaving loose threads or feeling disposable. Each episode I watched tugged at the heartstrings in its own way and felt honest in the conflict it displayed and the resolution it then reached, providing a very warm, well-rounded experience. Natsume can be best described as chicken soup for the soul - it feels very warming, very nourishing and downright enjoyable. It really is the perfect show to curl up in front of, watch an episode of, and then come away feeling refreshed.

Another refreshing aspect of the show is the characters, particularly Natsume himself, as they feel like tangible, relatable people. Natsume is a great protagonist because he is an astonishingly well written character - he is not an embodiment of a trope, or a sarcastic jerk, or a blank slate for the viewer to transplant themselves into. Instead, Natsume is a genuinely good kid. A kind, polite lad who tries to deal with his particular circumstances the best he can. The worst that could be said is that he is perhaps too kind, and a little bit of a worrywart. The rest of the cast are just as well rounded out - they may not all be nice people all of the time, but you can empathise with them and enjoy seeing them on screen.

Every aspect of the show is, quite frankly, lovely. The art is beautiful without being ostentatious; the first episode of this season in particular uses its budget well to visually impress with some very nice touches that don't intrude into your viewing experience. All aspects of the sound are equally impressive - barring one small exception the voice cast feel comfortable and expressive in their roles, particularly the main character who manages to cram a lot of emotion into every line. The background music is wonderful, using a well selected range of instruments to compliment what is happening on screen without overpowering. I would honestly pick up the soundtrack if it was made available because it is just so pleasant.

I do have one gripe with the show, which is probably a very localised complaint. Natsume has a companion - Nyanko-sensei, a rather strange looking cat-youkai who acts as Natsume's teacher about the world of spirits as well as protector in case any of the Youkai get uppity and think they can eat Natsume for a spot of lunch. Nyanko also provides a great deal of the uplifting humour in the show through his generally selfish attitude and casual gluttony. The main issue I have is that I greatly dislike his voice actor - the voice used sounds grating, and somewhat mismatched for such a wise character. Sadly this dislike did not lessen as I watched more episodes, but it is a exceedingly minor complaint when taken beside the rest of the positive aspects in the show.

As I mentioned further up this review, I'm honestly shocked that more people (at least in the circles I run in) are not talking about this show. Each episode I watched (admittedly only three) was such a lovely, elegant package, and a true delight to watch. Time would fly by when watching, and once the credits started to roll I felt satiated, knowing full well that it had been time well spent. Natsume wont blow your face off with bodacious amounts of compressed awesome, but instead provides a much more consistent shot of warmth and enjoyment. Plus, it's easy to jump in and start watching at the start of this season, so there is nothing stopping you from picking it up right now. And if all that doesn't persuade you, there are not one, but two counts of characters giving each other "bro-fists". Hell yea.
You can currently watch Natsume Yuujinchou in streaming form right here at UK Anime Network.

10
Combining wonderful visuals, a great soundtrack, enchanting characters and a very nourishing honesty in its storytelling and emotion, you really should not be missing out of this gem.
LATEST REVIEWS