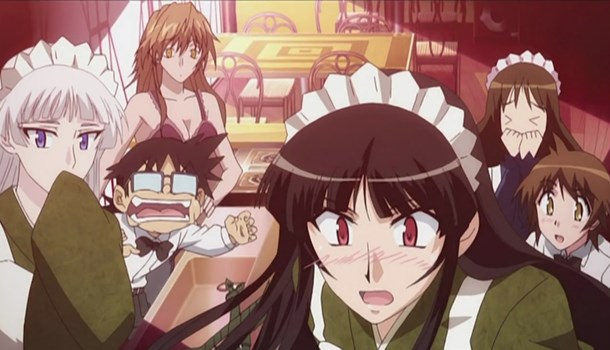 After experiencing at least some degree of popularity in its native Japan, SHAFT's take on School Rumble creator Jin Kobayashi's manga project Natsu no Arashi found itself blessed with a second series of thirteen episodes with which to charm its audience further, in a show officially subtitled Akinai-chuu but which is ostensibly really just episodes fourteen through to twenty-six of the series.

As we rejoin the various characters who all but make the Hakobune cafe their home, so little has changed in terms of the core tenets of the series - This means that there are still four time travelling ghosts of girls killed in World War II present and correct, as are the living, breathing persons to whom they are "connected" in order to both facilitate that time travel and sustain enough energy to avoid their disappearing entirely.

While the first season of Natsu no Arashi somewhat split its time between everyday fun and frolics and some far more serious (and genuinely quite harrowing at times) fare thanks to jumps in time back to war-town Japan, this second batch of episodes abandons the latter entirely in preference of upping the "fun" quotient of the series substantially.

While there is something of a wider plot thread which runs throughout the series and arguably offers a more emotional and sober side to proceedings (namely that of the relationship between Arashi and series protagonist Hajime as if it waxes, wanes and shifts in time to the difficult nature of the former's ethereal status), such matters are largely relegated to the back-burner in preference of a continuing focus on Jun Kamigamo as she continues to try and hide her gender from her workmates and friends so that she can live a supposedly simpler life as a boy, as well as other even more random one-shot story arcs which feature everything from spicy kiwi fruit "bombs" to Kanako's short-lived emergence as a magical girl.

Given this scattershot approach to storylines and episode structure, it's probably of no surprise to hear that the show's episode quality is similarly hit and miss, and in all honesty the vast majority of episodes are decidedly flaky in terms of both content and humour indeed.  While there are occasional "winning" episodes to be found here, with Jun's gender crises occasionally played to great comic value until the whole thing becomes tiresome and some other memorable moments rearing their head at times (often boosted substantially by SHAFT's eccentric and playful animation style), such magic moments are simply too few and far between to be anything but frustrating.  For every great play on the finer points of time travel (and no, spoiled milk will still be spoiled if you travel back to a time prior to its best before date, in case you're wondering), there are other motifs that get frequently reused within Natsu no Arashi to the point of causing utter, utter boredom.  At times, it simply feels like this show is trying altogether too hard to bring new catchphrases into the public domain, and when paired with a handful of utterly insipid episodes you can't help but feel disappointed come the equally non-descript end to the series.

Perhaps this disappointment is only amplified by those incredible (although admittedly rare) episodes from the first half of the series that dumped us into the middle of World War II fire bombings in an unforgettable way, but even with its ties to those goings-on severed there really isn't anything here to make you sit up and take notice during this second season of Natsu no Arashi.  When an entire thirteen episode series feels like filler, you know you're doing something wrong, and a few good jokes is nowhere near enough to fix such a fundamental problem.

At the time of writing, Natsu no Arashi! can be viewed in streaming format from Crunchyroll - The entire series is now available to be viewed on the site by all members.

5
Everything that was good about Natsu no Arashi's first half goes missing in action here, leaving a few good jokes to be mired in a sea of mediocrity.
LATEST REVIEWS