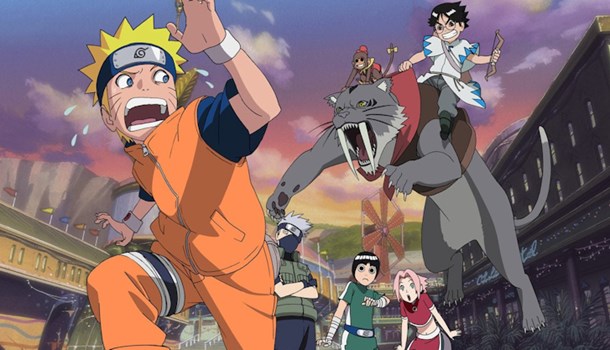 Naruto the Movie 3: Guardians of the Crescent Moon Kingdom

Naruto, Kakashi, Sakura and Rock Lee are assigned to protect the Prince of the Land of the Moon after their last set of bodyguards left their post. The group follows the Prince during his tour and must protect him and his son Hikaru from the perils of the world. When the tour arrives at a circus things take a far more interesting turn.

So here is the final film in the current run of Naruto. With this being set after the conclusion of the manga arcs, we are minus a Sasuke, and as with the last two films the story is very self-contained within the movie and has no bearing on the overall plot of the series. Once again the story focuses on Naruto and the accompanying new companion, while Kakashi and Sakura do get a few more lines and scenes than normal; Rock Lee could easily be interchanged with the large number of secondary characters. Hell, he doesn’t even get a decent fight until right at the end. But to be fair, Rock-Lee does get the most bad-ass fight and just reinforces why so many seem to like him.

As usual with the film versions of TV shows and as per the previous films the visuals have clearly been given a budget boost to the point of actually giving the main four characters some fresh clothes. Amazing I know. The film’s original characters are highly recognisable, but their personalities fall into the usual character types of bratty kid that Naruto comes to blows with and the fat prince who needs a serious life lesson. It’s all pretty standard fluff and damn predictable, but it at least is something a little different and is certainly better than the previous two films. I won’t blame you if you decide to skip through the moral lessons to reach the action scenes though.

Ultimately the deciding factor as always with anything Naruto is your love of the series itself. Should you be an unstoppable Naruto fan, then this is just more bang for your buck. This isn’t going to turn those repulsed by Naruto towards the orange jumpsuit cult, but for those in the middle camp it will help to lean just a little more to the Naruto side. It is by no means Oscar winning material for sure, but at the very least it is marginally better than what has come before, which for a series of films based upon a long running series can only be a feat in itself.

- The Story of Naruto: Growing Up a Ninja
- Teamwork: The Art of Group Recording
- Shooting for the Moon: A Conversation with the Naruto Movie 3 Producers
- Trailers