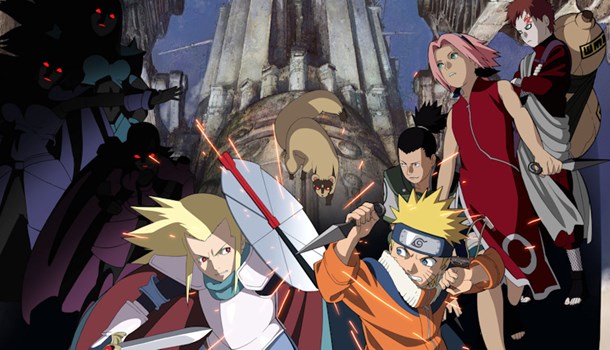 An everyday mission for Naruto, Sakura and Shikamaru quickly turns into a bad day, when the group is attacked by a strange army of soldiers and their blonde haired leader who seems to have a very strange power. Elsewhere Gaara and Kankuro are attacked by the same mysterious army while protecting a beach front. It all kicks off when Naruto and the new enemy fall into a canyon during their battle.

Films that come from long running TV series are usually just elongated episodes with lashings of fanservice, improved animation and stories that either tread familiar ground or wrap up everything nicely without any impact on the main storyline. The second Naruto film pretty much does all that. While the first film was quite pedestrian affair, this latest movie has a more interesting storyline and, while not breaking new ground, is entertaining in itself.

The animation is the usual high standard that is expected of these specials. This time around though it seems the work has been given to a different studio, as even for a TV series movie, the animation is leagues ahead of the standard television show.

All the usual Naruto series staples are here. High powered attacks, Naruto giving motivational speeches about his childhood and all the popular signiture attacks you expect from the cast, with special attention paid to Gaara and Kankuro on this outing. The most refreshing thing within the film is the shift in tone for Sakura. Usually she's a useless, screaming whiny annoyance, but damn, she got game this time. Why can’t she be more like this in the series?

The main plot of the film is somewhat entertaining, but again like most of these types of films, it doesn’t break new ground. New characters are introduced and everything slots together towards the end like it usually does. Until the end, there seems to be two storylines running together, which makes the plot disjointed, especially when one story takes control over the other making some of the characters completely pointless. It does tie itself together towards the end, especially when the blindly obvious plot twist comes into affect. But how we got there can be just damn confusing at times.

Taken at face value this is an enjoyable Naruto romp. Fans will get a kick out of the more interesting fight sequences and overall this is a much better effort than the first film. It’s not going to set your world alight and Naruto fans are more likely to enjoy Naruto being himself, but people with a passing interest of the series may want to give this a go before ploughing head long into 100+ episodes of the TV series.

English and Japanese dubs in 2.0 and 5.1
Selection of Manga Trailers