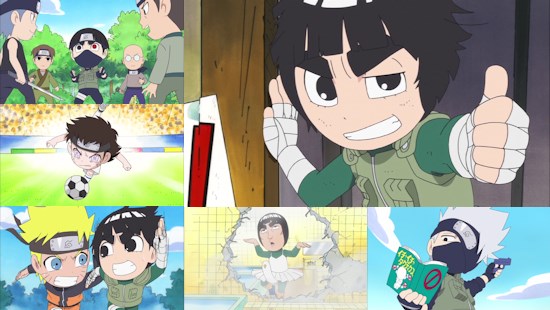 Given the success of the Naruto franchise, it's surprising both that there haven't been more spin-off series to leverage its popularity, and that it took so long for any to emerge - compare and contrast to something like Attack on Titan or Puella Magi Madoka Magica, both of which have given birth to an almost obscene number of off-shoots.

However, 2012 did bring us a notable comedy spin-off in the form of Rock Lee and His Ninja Pals, and after a long wait since its streaming debut the series is finally coming to the UK on home video courtesy of Manga Entertainment. Although Naruto's name is shoe-horned into its elongated full title, the star of the show here is in fact Rock Lee and his direct comrades Neji and Tenten - a smart choice it has to be said, as Rock Lee's character carries more innate possibilities for comedy than the rest of Naruto's cast, while Tenten puts in a solid shift as his "straight man" (much as she bemoans this role) while Neji is used more fluidly to play to or against his character archetypes as the situation demands of him.

Each full-length episode is split into two "sub-episodes", all of which keep us well away from any of Naruto's major storylines to focus instead of what is effectively slice of life fare around the Hidden Leaf village. Rock Lee goofs around, tries to woo Sakura, and involves himself in shenanigans with numerous members of the show's wider cast right through to Orochimaru as even the bad guys get to ham it up for comedy value. All of this is presented in a cute, chibi "Super-deformed" style which matches the tone to a tee and genuinely works well to differentiate this spin-off series from its big brother and provide it with its own brand of visual appeal.

There isn't too much to say about the series beyond that - the series hits all of the events and scenarios you might expect, while the overall tone of the show tends towards childish humour around dog poop, farts and the like. There's nothing inherently wrong with this, and at times the show makes good use of what it has as it playfully toys with its cast of characters in particularly silly ways, but over the course of four discs and 26 episodes it can get a little wearing while some jokes wear decidedly thin when viewed in concentrated form. This perhaps serves as a reminder for the audience to which Naruto itself is aimed, squarely hitting a younger demographic than it arguably appeals to in the west.

One area where this series' localisation excels is in its drive to expand and accentuate the comedy on offer via the show's English dub - while it faithfully captures the general gist of most of its gags, it also adds an extra layer of humour in its delivery and wordplay that got a fair number of laughs out of me that would otherwise not have been present in the original presentation. While some purists may not appreciate its deviation from the source material (and as much as I've bemoaned this kind of treatment when applied to other anime comedy series), it really works well here to add notably to the viewing experience as a whole.

What a shame then that the rest of this English presentation feels subpar. Most importantly, this release sports no sign subtitle track if you watch that English dub, which is a parlous state of affairs given the amount of on-screen text that crops up at times and in turn undoes some of the good work the English localisation has brought to the table - in the end, I found myself watching the show with the English dub and English subtitles as the only way to fully appreciate the show, which is a frankly ridiculous state of affairs. Add that to the use of TV broadcast rather than home video materials, complete with Japanese karaoke (but no English subtitles) on the opening and closing credits, and this feels like a low-effort release pushed out of the door with little care taken as to its presentation - I've been informed that this is the norm for Naruto's western home video releases, but that doesn't excuse the notable oversights mentioned in my eyes. Thankfully, we can at least say that the video quality on these DVDs is excellent, and you'll rarely if ever find yourself bemoaning the lack of a Blu-ray release.

As someone who admittedly has not watched any Naruto beyond its theatrical movie outings in some years, there are certainly elements of Rock Lee and His Ninja Pals' comedy that I'm missing, but even then the series as a whole has a pretty simplistic focus on gags and silliness that works well here and then, but not as consistently as you might hope given the wealth of characters at the show's disposal. It's often left to the English dub to save the day, and it's testament to the writing of this English localisation that it undoubtedly adds notably to the entertainment value of the series without abandoning the core tenets of the source material. If you're a Naruto die-hard, then Rock Lee and His Ninja Pals offers up an occasionally enjoyable distraction from the serious business of the series proper, but it simply doesn't have the comedy chops to be highly recommended, and the notable omissions within this UK home video release don't help that proposition either.

5
A mildly amusing comedy spin-off elevated by a well-written and funny English dub, but hampered by a missing sign subtitle track.
LATEST REVIEWS