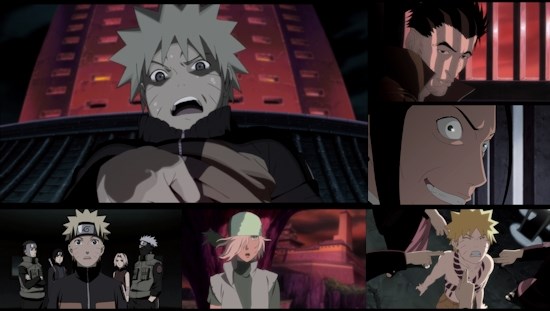 Naruto's adventures in manga form might have come to an end in Japan (for the time being at least), but we're still some way off seeing the last of our instantly recognisable ninja friend in animated form, particular on home video - a thought reinforced by the arrival of the fifth Naruto Shippuden movie, Blood Prison, on DVD. Okay, so on DVD and Blu-ray technically speaking, but let's talk about that later shall we?

Although we know that Naruto can be a troublemaker at the best of times, he isn't exactly the type to sneak around attempting to kill high-ranking members of other ninja villages... however, this seems to be exactly what he's up to as the film begins, and it isn't too long before descriptions are circulating and his comrades within his own village are pointing fingers. Needless to say, Naruto is quick to argue his innocence, but it seems that nothing will sway Tsunade and company, and before we know it our titular hero is shipped off to a rather menacing prison known as Hozuki Castle.

With the prison's head, Mui, capable of using an ability which prevents the inmates from using their chakra (or bursting into flame if they do) and with raging seas all around, escape appears to be impossible - not that "impossible" is a word that can be found in Naruto's dictionary. Thus, he sets about trying to escape in his own inimitable style using sheer brute force, although when this seems set to fail it appears that he's lucky enough to have some useful allies within the prison walls who can set him on the right path to freedom, justice and the true reason for his incarceration.

If the whole "protagonist is framed for a crime he didn't commit and thrown into prison" plot sounds like something that you've heard a million times before, then you'd be right, and incredibly this isn't even the clumsiest aspect of Blood Prison's script - the reason for Naruto being tossed into the clink is ultimately explained via a twist in the tale that feels even more forced than the half-baked idea that precipitated it. If you're looking for a smart, well-written story, then this is not the movie for you.

Thankfully the meat within these rather dry slices of narrative bread actually works pretty well - compared to other Shounen Jump films Blood Prison is surprisingly tight in its focus thanks to the way it throws Naruto in at the deep end on his own, and watching him do things his own way without the rest of the show's traditional cast to back him up proves to be pretty enjoyable. The film is also very well-paced and never threatens to outstay its welcome, making sure that the plot always moves forward without getting bogged down in exposition and technicalities.

Although this isn't the most action-packed of Naruto Shippuden movies, it also does a good job of keeping its powder dry and then unleashing it to full effect - it feels like virtually the entire film's animation budget is saved for one massive action set piece, and the pay-off is worthwhile to give the fans something to marvel over once Naruto's relative solitude is broken. This grandiose climax might break the film's narrative and reduce it to rubble in a moment which actually had me swearing at my television in irritation, but at least it uses that rubble as a springboard for some visual finery and good old-fashioned ninja combat action.

That holding back for a sudden onslaught of action does mean that the rest of the film is visually unremarkable - drab, even, although that is at least fitting of its prison locale. The result is that Blood Prison's animation mostly feels passable, with only a few decent moments to tide you over until its grand denouement. Meanwhile, both English and Japanese language tracks offer solid performances throughout and prove to be equally enjoyable to suit your preference of presentation.

With all of that covered this brings us to the elephant in the room, as our good friend the format war pops in for a quick visit. To put it simply, if you want to own this film on Blu-ray in the UK, you have to buy all five currently available films in a so-called "Movie Pentalogy", otherwise the film is only available on DVD in standalone form. It's perhaps the most ludicrous release strategy we've seen in a long time from a consumer point of view, and could almost be argued as a new low-ebb just as it seemed as if Blu-ray had finally won enough market share and mindshare to be seen as the dominant format for the industry. If this were the final film it maybe wouldn't be so bad, but who's to say that the remaining Naruto Shippuden movies won't also only be available on Blu-ray in movie box sets? Although this frustrating state of affairs hasn't affected our review score for this title, it's another damaging PR blow to Manga Entertainment, who go into 2015 desperately in need of buoying our confidence in their ability to deliver the quality products that matches consumer's expectations.

If DVD is good enough for you however, we've taken a look at both the DVD and Blu-ray versions of the film and the former is perfectly acceptable - it looks pretty good, but of course can't capture quite the range and clarity of action scenes that Blu-ray can, nor does its 5.1 audio track have quite the same clout as its lossless equivalent. There's no doubting which format we'd rather have, but the drop in quality of the DVD version isn't overly pronounced unless you have a keen eye for such things, and both versions of the film seem to boast good quality, well-timed subtitles.

Included in both versions of the release is the extra Chunin Exam on Fire! Naruto vs. Konohamaru! short film, which is a fun little affair that sets our protagonist against the diminutive Konohamaru during the Chunin entrance exams, while an interview with Naruto's Japanese voice actor and a message from series creator Masashi Kishimoto are also included to provide a nice sprinkling of extra material.

As a whole, Blood Prison is a pretty entertaining Naruto movie - its restraint is appreciated and provides it with a stronger core story that strikes at the heart of elements which has made the franchise so popular, albeit in a way that's undermined by some horribly contrived attempts to ensure that the film's narrative moves in the required directions. Its relative lack of spectacle makes for a more personal and tight film that might nonetheless struggle to live long in the memory, bringing with it the prospect that this is a UK release that will be remembered more for its bizarre release strategy than the actual content of the disc. Still, if the lack of an accessible Blu-ray release doesn't bother you, there is - as always - plenty for Naruto fans to enjoy here.

6
An enjoyable film that might struggle to be a memorable one, not helped by the lack of an affordable Blu-ray release.
LATEST REVIEWS