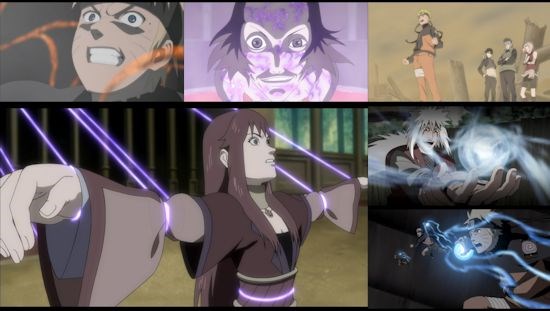 Whether you're a long-standing fan of Naruto or the type to casually dip in and out of the series, this shounen franchise's movies are often the perfect way to enjoy a bit-sized chunk of ninja action without too much prior knowledge of what's going on within the behemoth that is the series proper. With that in mind, can this fourth Naruto Shippuden movie, The Lost Tower, deliver for all and sundry?

As has become tradition with these Shounen Jump movies, things start with a rather significant bang, as Naruto and cohorts try to stop a rogue ninja by the name of Mukade who is looking to unleash and tap into a vast power previously sealed away by the fourth Hokage. As their mission goes south, Naruto's rash last-ditch attempt to stop Mukade leads to both himself and Yamato simply vanishing, engulfed by the phenomena which Mukade invokes. Is this the end for our titular character?

Of course not - rather than death, Naruto finds himself coming around in a location not entirely dissimilar from the one he just left, except instead of his teammates he finds only a lone, sorrowful girl who quickly runs when she spies him. Giving chase, Naruto inevitably soon finds himself in trouble, wandering into an immense and unusual city as he discovers the true status of this girl before being approached by some Hidden Leaf ninjas who warn him away from interfering in what is transpiring in this world.

As ever, telling Naruto to stay away is akin to waving a red rag in front of a bull, and before we know it he's rescuing Sara, who he now realises is actually the queen of this land, and in the process uncovers a deep, dark conspiracy that sees her acting as little more than a puppet of a leader, the strings of whom belong to Anrokuzan, a man who is suspiciously familiar to Naruto... Besides which, just who are these Hidden Leaf ninja who are already investigating goings-on? The answer is a decidedly brain-melting one for Naruto to comprehend.

Perhaps the most striking aspect of The Lost Tower is that, to some extent at least, it manages to use its premise to break free of the usual settings and scenery that we've become used to in the Naruto TV series. This makes for a refreshing change in terms of the film's aesthetic, with Loran's imposing city of towering buildings not only giving the film a unique look but also playing into at least some of its action sequences in an enjoyable way. Even outside of this, The Lost Tower offers up the usual doses of action that we've come to expect of this series, and its theatrical outings in particular - there are certainly some entertaining and satisfying battles to be found and enjoyed scattered throughout the movie which will please the fans.

Sadly, where the film falls a little flat is that it doesn't have a story to match - there are some really interesting ideas on show here that serve to craft some fascinating meetings between characters, but beyond this the film's narrative also suffers from some weak, and to be quite frank lazy, plot twists as it attempts to manoeuvre its story into place. This isn't helped by a feeling that the film runs too long in spite of its standard ninety minute running time - an entire segment that takes us between the second and third acts of the film spins its wheels for too long, and it never quite recovers its moment from that point forward.

Beyond these issues, this is generally speaking a pretty solid Naruto movie - not the best that the franchise has brought to the big screen but not the worst either, ensuring that it at least does enough to entertain the long-standing fans while also offering a little popcorn munching fare for those with a more casual interest in Naruto. This applies to every aspect of the production - this is similarly not the best-looking or sounding Naruto film either, but is more than passable in both respects and works perfectly well with both English or Japanese audio in place, and there were no subtitle issues or the like to speak of so the Blu-Ray presentation of the film we were offered for review did everything required of it.

Speaking of which, this release also includes a bonus extra short film which screened in Japanese theatres before the main feature - Naruto and the Three Wishes transports us back to the original Naruto (aka non-Shippuden) timeline and a short, daft yet oddly endearing tale of a trip which sees Naruto, Sasuke and company stumble across a genie in a bottle. Original it certainly ain't, but it's actually rather fun to return to pre-Shippuden Naruto if nothing else, and it's a neat little addition when previous Naruto films have largely been bereft of much in the way of extras.

Overall then, The Lost Tower isn't a pinnacle of Naruto in theatrical form, but it's a reasonably entertaining and refreshingly different movie that delivers some sharp action scenes and enough of what you'd expect of the series to satisfy its fans. Beyond that it doesn't follow through on its early promise and as a result isn't particularly memorable though, so for those not deeply involved in the world of Naruto this is probably a movie that you can afford to miss out on.

6
It doesn't ultimately live up to its promising setting and premise, but this is still a broadly entertaining movie and certainly one that long-standing Naruto fans will enjoy.
LATEST REVIEWS