Naruto Shippuden The Movie 3: The Will of Fire 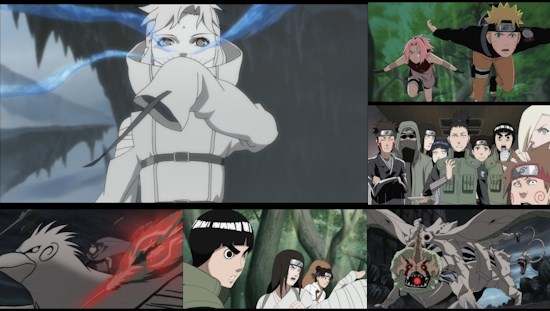 Naruto Shippuden The Movie 3: The Will of Fire

Although it's been many years since I've watched any of Naruto in its television form, the roll-around of the show's inevitable, occasional movie iterations always gives me a nice, brief opportunity to revisit the world of the orange jump-suit sporting ninja to find out what's going on in his particular world. This opportunity has now cropped up again thanks to the UK release of The Will of Fire, and with the film originally released to celebrate the tenth anniversary of the Naruto franchise this third Shippuden film promises to be a memorable one.

As is par for the course with most Shounen Jump derived movies, The Will of Fire kicks off in action-packed fashion as Naruto, Sakura and Kakashi fend off unknown foes to rescue Sai from capture - a scuffle that leads to both Naruto and Sai being injured in the process.

This is merely the precursor to a far more pressing problem that threatens all of the ninja villages within this world, as an outcast from the Hidden Leaf Village known as Hiruko moves towards the final stages of a particularly nefarious plan - a scheme that seeks to grant Hiruko a perfect set of powers, immortality and ultimately the ability to rule over all. To gain these powers however Hiruko needs to obtain five Kekkei Genkai, and with only one left outside of his grasp it's Kakashi's Sharingan which looks set to be the final piece of the puzzle.

With this setup in place, you can probably guess how the rest of the film plays out - in spite of protestations and outright commands not to do so, Naruto sets out to save Kakashi from what appears to be his fate, in a decision that sets him against his former friends and plenty of the regulars of the show's cast before ultimately uniting them against a common enemy.

As far as its story-telling goes, this film has everything you'd expect from an anime spin-off movie - original characters that can be brought in and then disappeared as required, an assertion that none of the regular characters will die or do anything to impact the storyline, and a thoroughly self-contained affair that only makes brief links to the main series that won't leave you lost if you aren't a Naruto regular. All of these elements can be frustrating if you're looking for something with more depth or bite, but as long as you go into The Will of Fire with prior knowledge of these traditional caveats then you'll probably leave pretty satisfied - the show is visually fantastic throughout, particularly when it comes to its big set piece action sequences, and the interactions of the main cast are satisfying in spite of their predictability.

The only real complain I have about the movie is how poorly fleshed-out the anime original bad guys are - Hiruko does at least have some motivation to his actions but it feels ill-defined and a little hard to swallow, but at least this is better than his sidekicks who have absolutely zero background or explanation given to their characters or their actions at all! Sure, this is a Naruto movie and not Ghost in the Shell, but a little more building out of these characters would have gone a long way towards giving the film's story some bulk behind the admittedly cool action.

This story-telling gripe aside, in practical terms this Manga Entertainment release is flawless judging by our Blu-Ray review copy of the film - it looks great, the movie's audio is impressively powerful, subtitles are all present and correct, and both English and Japanese voice casts do a very good job indeed.

If you're a hardcore Naruto fan or someone who loathes the franchise, then you probably already know your stance on The Will of Fire - fans will lap up a chance to step outside of the confines of the TV series for this theatrical adventure, and anyone who can't stand shounen anime of this ilk will have a whole stack of reasons why they'd never be seen dead with 200 metres of this movie. That leaves us speaking to those of you sat in-between those two poles - the casual fan, or the anime lover who really hasn't seen much Naruto. Unless you're a regular viewer chances are there will be one or two moments that mean nothing to you, but these aren't damaging to a film that hits the right notes in terms of utilising its characters and delivering a strong quote of action. It might not be ground-breaking or surprising, but The Will of Fire is a lot of fun and has a legitimate claim to being the best Naruto Shippuden movie yet.

The Will of Fire is available as a standalone release on DVD and Blu-Ray, and also as part of a Naruto Shippuden Movie Triple Pack on both formats.

7
Poorly fleshed out original characters aside, The Will of Fire delivers what the Naruto franchise is best at - lots of breath-taking action, carried out by cool and likeable characters.
LATEST REVIEWS